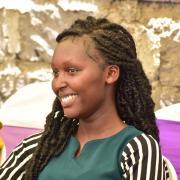 Samantha is an undergraduate student pursuing Computer Science. She is an Android developer with a speciality in Kotlin and Java. Samantha is part of the Google Developers Community in Kibabii University. She is a tech enthusiast and loves reading and swimming.

A side effect is anything that escapes the scope of a function. In Jetpack Compose, it refers to the content inside a composable function.

To handle such effects, we use an EffectHandler which is a safe environment.

To follow along with this tutorial, the reader should have:

By the end of this tutorial, the reader will be able to:

Effects should be invoked from a controlled environment that is aware of the composable’s lifecycle. These components are needed to modify the app’s state.

The Effect APIs are used when you need to modify the state of the composable so that side effects are executed predictably.

Let’s get started and see how this happens.

Side-Effects and how they occur

As discussed, a side-effect is anything that exists outside the scope of a composable function.

Side effects can cause adverse effects to an app. This is because they can modify the application state beyond the scope of the composable.

This implies that every time a composable function is invoked, it may respond differently.

Composable functions run several times or even skip execution. Therefore, relying on their global state can result in unexpected behavior.

Compose has several strategies for dealing with side effects. These techniques assist in managing the lifespan of side effects and removing them after they are no longer needed.

There are several ways we can perform side-effects in Compose.

To understand Effect handlers, we first need to know the Compose lifecycle.

Composables join the composition when rendered on the screen and depart when they are removed from the UI tree. On some occasions, effects may cross from one event to another.

Effects may have long lifespans while others have shorter lifespans. This allows you to utilize them in many compositions.

Effect handlers can be divided into two:

These are effects that may occur when we make long-running operations such as network calls inside a Composable.

The popular techniques in this effect are rememberCoroutineScope and launchedEffect.

LaunchedEffect may be used to do tasks during the lifetime of a composable. The coroutine will self-destruct if the composable is no longer shown on the screen. This helps to avoid memory leaks.

In general, the lauchedEffect does the following:

Let’s take a timer for example. We want this timer to start when the execution of a composable begins and stop when the composition ends.

In such a scenario, we start the timer inside the LaunchedEffect block. When the composable exits, we don’t have to bother about suspending or cleaning up timer-related code.

In the LaunchedEffect part of the above code, the initTimer() function will show a toast message when the time completes, or when it’s terminated.

The LaunchedEffect block takes key1 and block parameters. When the value of the first argument key1 changes, the launchedEffect is notified to start the coroutine afresh and destroy the old one.

The second parameter is block. It is a lambda that is executed when the launchedEffect is invoked. Suspend functions are executed inside this block.

In some special cases, LaunchedEffect is not used because of the following reasons:

Due to these constraints, rememberCoroutineScope is preferred in such circumstances.

rememberCoroutineScope generally returns a scope. This method produces a CoroutineScope that may be used to construct tasks that are part of the composition.

rememberCoroutineScope allows us to initiate coroutines from any composables or callbacks. This can be done without having to worry about the coroutine’s lifespan.

The rememberCoroutineScope() method in the above code is used to access the scope. It’s worth noting that the scope is linked to the lifespan of the composable.

So, if any coroutine is executing when this composable exits, it will be stopped immediately.

When the button is clicked, the coroutine is launched. This will start the timer in 2 seconds.

LaunchedEffect differs from rememberCoroutineScope in that it is used to scope tasks that are launched by the composition.

rememberCoroutineScope, on the other hand, manages tasks that are started by user interaction.

Under the non-suspended side effects, we will look at the DisposableEffect and SideEffect.

DisposableEffect is used for side-effects that need to be fixed up once the keys change or if the composable departs the composition.

In such a case where the DisposableEffect key updates, the composable must be able to destruct its current effect. This will be followed by calling the effect again to restart.

DisposableEffect is used to eliminate non-suspended effects. It commences when a composable starts and when the key of the composable updates.

It’s necessary to throw a callback in the end. When the composable departs the composition, it is destroyed.

This also happens when they key updates in every recomposition. In this case, the effect will be disposed of and relaunched.

Suppose we have a composable function to handle on-back pressed action as follows:

In this example, the dispatcher is called when the device’s back button is pressed. Our DisposableEffect block will handle the back pressed dispatcher callback.

We intend to attach the callback when the composable begins the composition, as well as when the dispatcher updates.

The dispatcher is used as the effect handler key to accomplish this functionality. In such a case, the effect will be disposed off and reintroduced.

You may provide a constant as the key if you just want the effect to execute once when it joins the composition and then dispose it when you leave. This can be done by: DisposableEffect(true)or DisposableEffect(Unit).

It’s worth noting that DisposableEffect always necessitates the use of at least one key.

This is the simplest side-effect handler. It grants us access to a block of code that is executed after every successful composition.

The value of the variable i will not be as per expectations after recomposition. This can be worse if you need to make a network call to update the UI inside the composable function without providing a safe environment to handle the side effect.

The best way to handle the side effect that may occur when you increment the variable i is by wrapping the code in a side effect block as shown below:

The code inside the SideEffect block will be executed upon a successful composition. If the composition fails, the code will not be executed.

In a Jetpack Compose app, you may encounter side-effects that you don’t intend to handle in the Composable.

At some point, we may want it to be tied to the lifecycle of the Composable. We make sure that it executes in the correct lifecycle phase.

We also ensure that it gets stopped to avoid memory leaks, and runs in a CoroutineContext. This context is supplied by the effect handler.