Linear classifiers are a type of supervised learning algorithm used on linear datasets. How is linearity defined in the case of a dataset?

Consider a dataset with two classes. If the linear classifier can come up with a linear decision boundary to classify the two categories, that is, a straight line of the form $y=mx+c$, then the dataset is linearly separable.

Consider the image given below. This is a linear classifier classifying the conjunction (AND) function. The two-input AND function outputs only one when the two inputs are 1. In all other cases, it’s output is 0. The dotted line given in the image is the decision boundary. 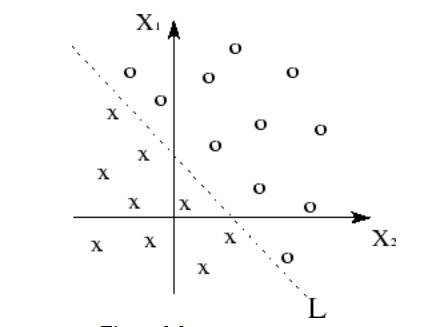 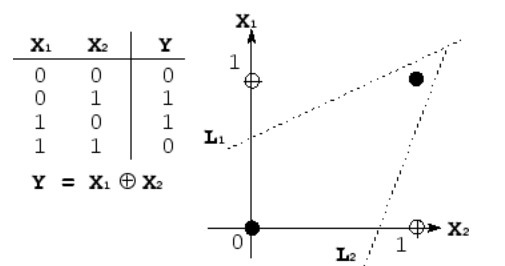 Linear classifiers work very well on datasets with linear decision boundaries. According to the example above, linear classifiers will fail when it comes to the XOR function but will classify the AND function.

Consider the following problem of fitting the best line for a given set of data-points. An intuitive way of fitting the line would be to fit a line at random and slowly changing the slope and the intercept values until we get a line close to all the data points in the set. The loss function, also known as the error function, mathematically defines the difference between the ideal and the actual values. 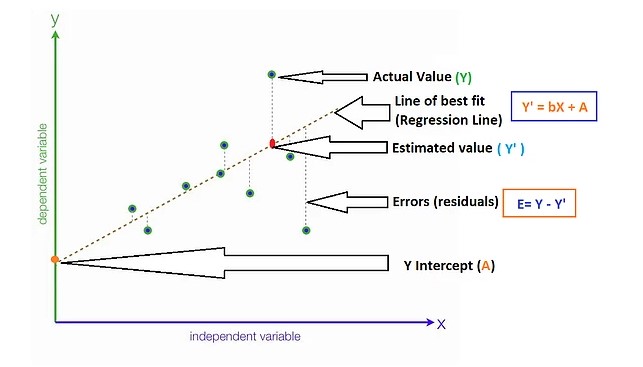 The linear classifier fits a linear boundary (a straight line) through the given points in the image above. The line is termed as the best-fit line. To obtain the line of best-fit, a loss function is defined.

It’s defined as the sum of squares of the distance between the line and the points. It’s called the least squares loss function.

The loss function is responsible for the performance of the linear classifiers. For this article, I will be using the logistic loss function, defined as follows:

The cost function takes in the classifier’s output, denoted by $h_\theta(x)$, and the actual output, $y$ as its inputs. We want to ensure only one of these values is activated for a given class.

Therefore, we have two equations, one for $y=1$ and the other for $y=0$. The $log$ terms ensure that the loss values are differentiable to ensure better optimization.

Stochastic Gradient Descent Optimizer tries to find the minimum for a function. The function of interest, in this case, is the loss/error function. We want to minimize the error, and therefore we use the SGD optimizer.

A visual representation of the Stochastic Gradient Descent Optimizer is given below.

This is a problem associated with SGD. Sometimes, we might end up obtaining the minimum of a loss function at the local minimum. This leads to an inefficient modeling of the loss function, thereby leading to a decrease inaccuracy.

The speed with which the balls travel is analogous to the learning rate, that is used later. Sufficient iterations of SGD are applied to tackle and nullify the problem of local minima.

Implementing the Linear Classifier from Scratch

Let’s begin with the implementation of the code. We will define a class called LinearClassifierwithSGD.

This class will contain the following methods:

We will implement the methods one by one, and in the end, coalesce the code together.

We will define and initialize the parameters in this method, that will be used in the next functions. 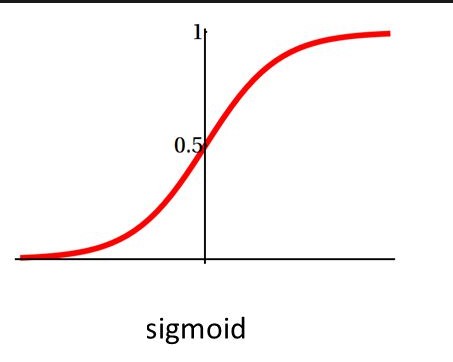 It’s given by the equation $sig(x) = \frac{1}{1+e^-x}$. We use the numpy library to implement exponentiation. Numpy offers np.exp() function to compute the exponential function.

We’ll compute the indvidual_loss, that is the loss computed per data-point. We’ll sum up these losses over the entire dataset using the np.sum function. The sum is the total cost, that is returned by the function.

This is an exciting function. We will compute the output estimated_y initially. Using this function, we can calculate the gradients dW and db.

The library sklearn includes a normalize function in the sklearn.preprocessing module. It is implemented as follows: The mean is subtracted from the data point and then divided by the dataset’s standard deviation.

The function fit takes in arguments X and y. The linear classifier is initialized with random weights. The initial cost is assumed to be infinity.

The while loop marks the beginning of the training phase. During the training, the following steps take place:

The input to the function is X. We normalize X if the argument normalize is True. We send it through the sigmoid function to compute the output variable ones. The variable ones contains the probability that the data-point X belongs to class-1.

Notice the sum of elements inside each list is 1. The sum of probabilities is 1.

The accuracy is computed as follows: $accuracy = \frac{\# of correct predictions}{\# of total predictions}$

The repl.it link is included so that you can see the output. Observe the decrease in the loss as the number of iterations increases. 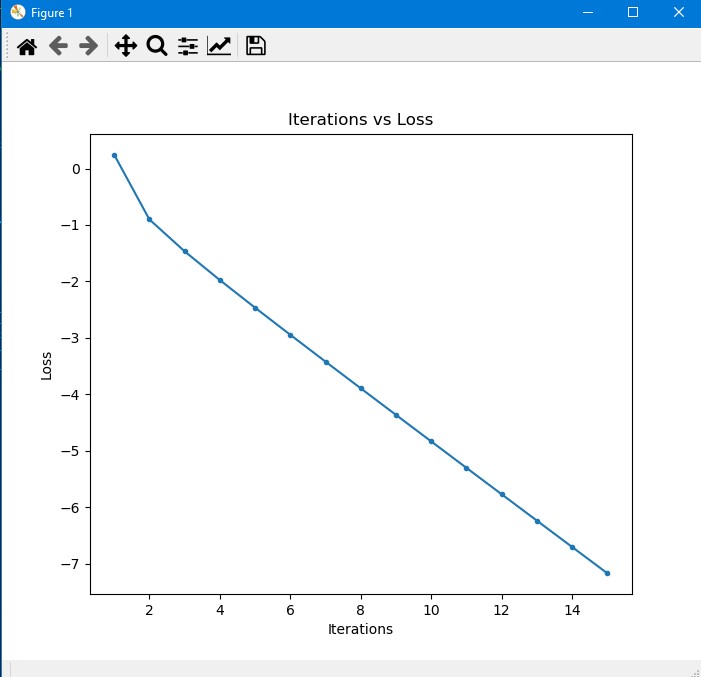 In this article, we have coded a linear classifier from scratch. I would like to congratulate you on making it this far. As a recap, I have attached the flow chart on how the data is fit for a linear model. I hope this helps conclude this article on a good note. 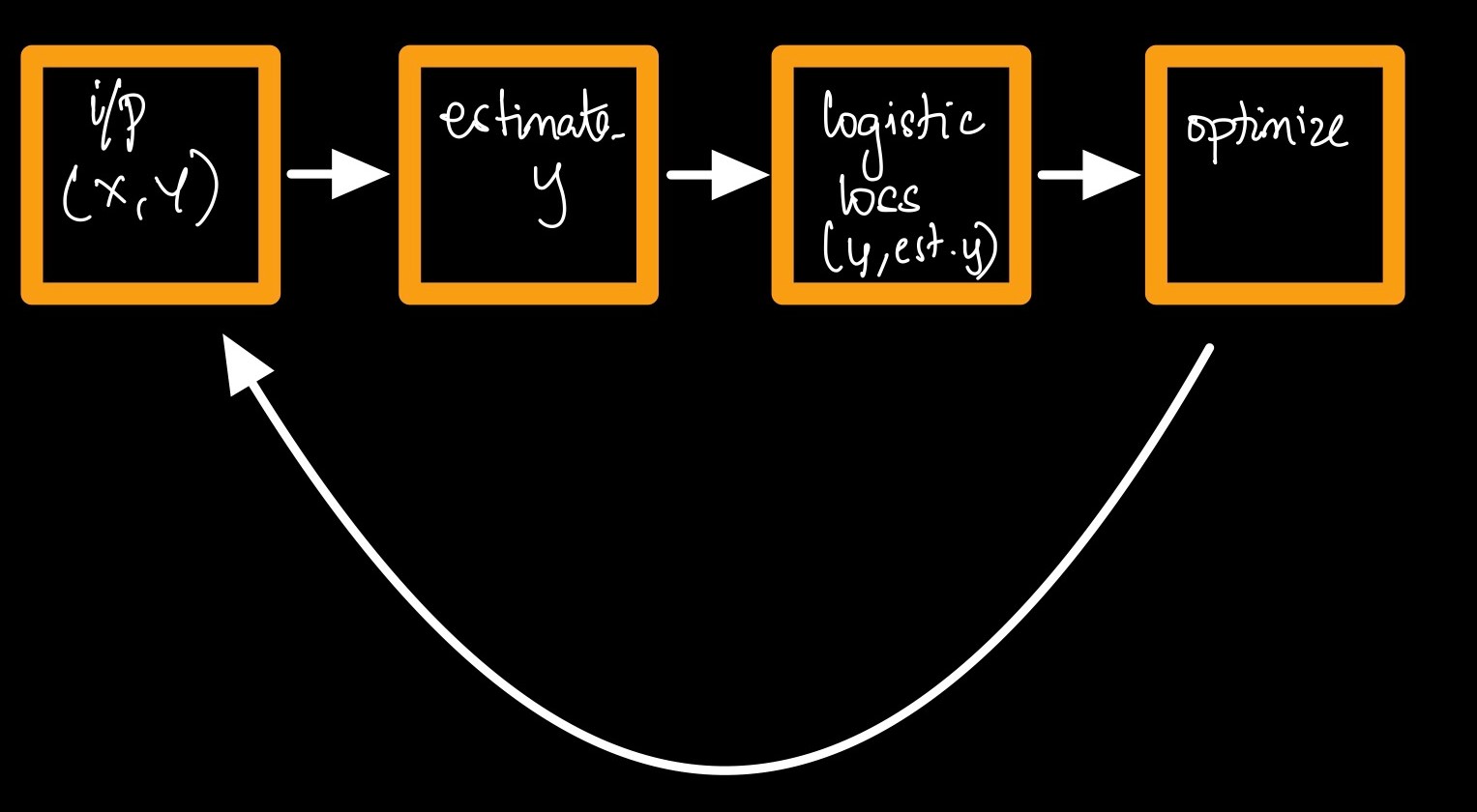