Perceptron Algorithm - A Hands On Introduction

Perceptrons were one of the first algorithms discovered in the field of AI. Its big significance was that it raised the hopes and expectations for the field of neural networks. Inspired by the neurons in the brain, the attempt to create a perceptron succeeded in modeling linear decision boundaries.

A linear decision boundary can be visualized as a straight line demarcating the two classes. In this article, we will understand the theory behind the perceptrons and code a perceptron from scratch.

We will also look at the perceptron’s limitations and how it was overcome in the years that followed.

This article will explain what perceptrons are, and we will implement the perceptron model from scratch using Numpy. For a quick refresher on Numpy, refer to this article.

By the end of the article, you’ll be able to code a perceptron, appreciate the significance of the model and, understand how it helped transform the field of neural networks as we know it.

The perceptron is a mathematical model that accepts multiple inputs and outputs a single value. Inside the perceptron, various mathematical operations are used to understand the data being fed to it.

Let’s consider the structure of the perceptron. The perceptron has four key components to it: 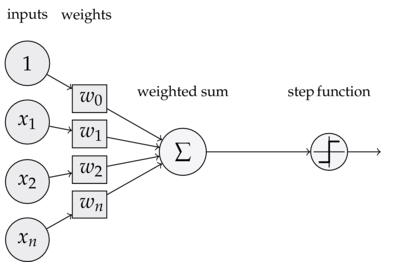 The inputs $x1, x2, x3$, represent the features of the data. For example, given a classifying task based on gender, the inputs can be features such as long/short hair, type of dress, facial features, etc. The input features are numbers in the range $(-\infin,\infin)$.

The inputs were sent through a weighted sum function. This was the first time weights were introduced. The McCullock-Pitts model only used the features to compute the confidence scores.

How do humans learn? We make a mistake, correct ourselves, and, if lucky, make more mistakes. Similarly, the majority of the learning algorithms learn through iterative steps. Iterative steps refer to the gradual learning by the algorithm upon seeing new data samples.

We will consider the batch update rule. That is, the algorithm computes the difference between the predicted value and the actual value. The difference is defined as an error. If the predicted value is the same as the real value, then the error is 0; otherwise, it’s a non-zero number. Once the errors have been computed for all the data samples, then the parameters are updated. The parameters define the learning model, and in this case, it’s the weights.

The learning update rule is given as follows:

The updated weights are changed by the difference in the actual output value, denoted by $y^{(i)}$, and the predicted output, represented by $h_\theta(x^{(i)})$.

The need to update the weights

The weights need to be updated so that error in the prediction decreases. The update rule is computing the error and changing the weights based on the error’s sign and magnitude. The learning rate denoted by $\alpha$ decides the scale of impact of the error.

We have just gone through the code of the first-ever model to learn patterns in data. We must code the same to get a better understanding of the concepts we just went through.

Let’s define a class called PerceptronClass and its methods:

We are using the Iris dataset available in sklearn.datasets module. We fit the model to the training data and test it on test data using the predict method. The output of the predict method, named y_predicted is compared with the actual outputs to obtain the test accuracy.

The training accuracy averages around 65%. The test accuracy is greater than the training accuracy. This indicates that the model can (be tweaked to) learn better, given changes are made in the hyper-parameters such as the learning rates and the number of iterations.

It will be a fun challenge to change the values of the learning rate and the number of iterations and observe their effect on the accuracies.

I have attached a screenshot of the terminal capturing the training and test accuracies. 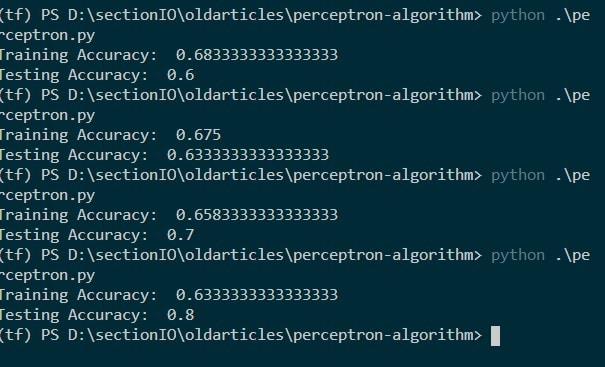 The perceptron model showed that it could model datasets with linear decision boundaries. Even though it introduced the concept of weights, it had its own set of disadvantages:

To tackle the problems above, a lot of modifications have been made. The unit-step function has been replaced with a continuous function called the sigmoid function.

The learning algorithms have been updated to consider the error surfaces’ derivatives, rather than only the errors. To ensure non-linearity, various activation functions have been implemented as well.