An Overview of Web 3.O

The World Wide Web (WWW) is a crucial element of our modern life. It has become part of our life, and it would not be easy to live without it. This is because technology has dramatically advanced to the point that people can now work remotely and interact effortlessly using the internet.

As a result, the reliance on the WWW has grown in the last three decades and has gone through stages of evolution from Web 1.O, Web 2.O, and Web 3.O.

Most individuals are probably curious about the future of the internet. Web 3.O (Web 3) is the web of the future. Many people are unsure how the next-generation internet (Web 3) will work. Web 3 is part of a much broader transition phase that we shall experience. As a result, there is a more significant change on the internet right now, and many changes are being implemented.

The internet just got a lot more complicated. There’s an increased awareness of web 3, and there is so much jargon in the space, and it isn’t easy to understand what it’s all about. This article will break down all the jargon for you and make you perfectly understand what web 3.O is all about.

This article will explain Web 3 or the future of the web. If you want to stay up-to-date on how we’ll change our lives soon, make sure you read this article to get the complete picture. Without further ado, let’s get started.

The evolution of the web

The internet and web technology have certainly evolved in the past few years. The World Wide Web has come through different phases: Web 1.O, Web 2.O, and Web 3.O. Each phase has brought about new technologies, tools, and techniques relevant to recruiters. 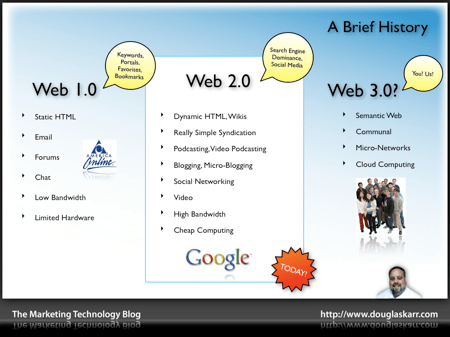 Let’s dive deeper to find out how the internet evolved from its initiation to what we know it as today.

Web 1.O was the first phase of the web revolution, also referred to as read-only web. It is primarily categorized by static websites that don’t do much but display information on the page.

For example, you can read text, click different links, and write and send emails but can’t attach or upload images and documents.

Web 1.O was a content delivery network (CDN) that showcased information on websites. People mainly used it in the year 1990 to 2005. It had a small number of creators but a vast amount of consumers.

Web 2.O is the interactive version of 1.0 since you were able to read and write on the internet. There are many content creators in Web 2.O since we have Youtube, Google, Microsoft, and social media applications.

Therefore, everyone has the power to share content on the internet. The ability to read and write has increased the value of the internet drastically. People are using the internet via their smartphones, iPads, and laptops.

With Web 2.O, the internet started to be a big part of everyone’s life, but at the same time, it also highlighted the flaws of 2.0. As the technology is growing, we care more about our privacy and how to protect our data. We have serious concerns over censorship and centralization.

Google, Amazon, and social media companies all have access to your data, and they may use it as they see fit. They have the authority and power to decide who is permitted to use or access their platforms, as well as what you should see.

All these middlemen are extracting value and collecting personal data, and it’s completely unnecessary. Security is another problem that has arisen. When hackers want to hack an app, they have to attack the app itself. In simple terms, we need more security and safer ways to store our data without censorship.

The emergence of Web 3.O is due to these challenges.

Web 3.O is essentially the decentralized web, where the power that was once held by Web 2.O corporations is being transferred to the people.

Web 3.O is internet powered by blockchains. This phase of the internet wasn’t possible before all the benefits of blockchain. The blockchain provides decentralization, trust minimization, and power to control data.

Tim Berners-Lee, the World Wide Web inventor, predicted that this phase of the internet would be known as the Semantic Web, which would be more open, intelligent, and sovereign.

Blockchain technology is changing how we interact with the internet by changing our data structures. The emergence of blockchain means we will be able to build Web 3 in a way that works for everyone.

Web 3 mainly focuses on connecting data in a decentralized way rather than storing it in centralized systems. So using these decentralized platforms will give users more control over their data, privacy, and security.

The shift toward Web 3 will enable the internet of value and open up so many possibilities for what we can do with the internet. Web 3 will bring a fairer internet by allowing individuals to interact with the system without passing through intermediaries.

Users and machines will be able to connect more seamlessly with data. This means that Artificial Intelligence (AI) will play a significant role in making this phase of the internet more intelligent and powerful to process information.

Why we need Web 3

Web 3 will be an updated version of Web 2. It will resolve multiple problems with the internet we use today and bring additional benefits.

Decentralization refers to the storage of data on individual nodes rather than a central server. Thus, there are decentralized nodes on which your data is distributed. As a result, no one knows where your information is stored, and it is more secure.

There is the blockchain concept because nodes connect one another, and the significant advantage is that the blockchain is more secure. Therefore with blockchain, your data is safer.

Looking at companies that control the internet, for example, Google and Microsoft, all traffic goes through them, they have the most money, have all the data, they have all resources. So what is the best way to compete with them? Decentralized systems are the answer.

Web 2 has brought about a shrinking economy as all these giant companies are earning a lot from our data. Web 3 will bring economic value as digital creators make money from their data like never before.

People spend hours online each day. It would be a good deal if we made money from the data we create while spending hours and hours online. But unfortunately, this is not the case in the current version of the internet.

Since Web 3 is built on the blockchain, cryptocurrency and decentralized finance (DEFI) will help create a form of money native to the internet.

In Web 2, data generated by users is controlled, managed, and used by giant tech companies. With Web 3 powered by blockchains, users will get complete ownership of their data. PRIVI, a Web 3 system, aims to return data ownership to the rightful owner. It also makes it possible for anyone to control and monetize their data.

People will have the power to decide the information they want to share with organizations and advertising agencies. They will also get an opportunity to earn from it.

Web 3.O will be a lot more secure than the earlier versions of the internet. Because it’s powered by blockchain, it’s considered immutable and secure. Therefore, it will be impossible for hackers to penetrate the network without being caught.

The future web will bring innovations in intelligence, automation, and robotics. It will therefore solve more problems. However, humans control everything about AI. But how can we let this AI make decisions and learn by itself in a way that humans do not control?

We’ll need a decentralized service that no one controls to set it free and make its own judgments. When this skill is combined with natural language processing (NLP), computers can more easily comprehend information in the same way that people do, resulting in faster and more relevant results. As a result, they will become more intelligent to meet people’s wants.

Web 3 will remove control of the web from the centralized authorities that currently dominate it. Anybody will be able to join the network and take part in it. Permissionless blockchain will make it possible to access information more beneficial to users.

Characteristics of permissionless blockchains include:

Blockchain technology is a decentralized system that facilitates peer-to-peer networking and maintains a chain of transactions and data. It joins the blocks in a chain with a cryptographic hash. As a result, the records are immutable, and the data structure is stable.

Blockchain technology serves as the foundation of Web 3. It adds enormous value to Web 3, and it’ll by fixing many Web 2.O flaws. In simpler terms, blockchain is the steering force behind Web 3, allowing formerly impossible tasks to be achieved.

The use of blockchain technology and decentralized nodes allows secure data storage, hence improving privacy. Due to data decentralization, personal information will no longer be maintained in centralized entities such as databases and data centers. Intelligent contracts, which do not require the involvement of intermediaries, are the preferred method.

Web 3 will change our lives by bringing an internet of value and developments. These developments will only be possible with blockchain technology, which serves as the basis of this next-generation internet. The field of digital technology is growing very fast, and very soon, Web 3.O will be here.