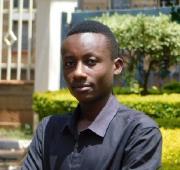 Willy Ngashu is a Fourth-year Computer Science student at MultiMedia University of Kenya. His interests are web development, Machine Learning and Android Development. He is passionate about machine learning and IOT appllications. Willy also loves writing articles on datascience and various advances in the technological industry.

We will use the Gradient Boosting Machine to train a natural language processing model. The model will perform sentiment analysis. It will classify a customer review as either positive or negative.

To follow along with this tutorial, you need to be familiar with:

As mentioned earlier, Gradient Boosting Machine trains multiple decision trees sequentially. The decision trees are then combined to create a final model. The initial decision tree model is the base model or a weak learner.

Boosting uses a collection of algorithms to convert weak learners into strong learners. It minimizes/reduces the training errors. A random sample of data is selected, fitted with a model, and then trained sequentially.

Weak learners may not perform well individually due to high variance or high bias. However, when we aggregate the weak learners, they form a strong learner. Their combination reduces bias or variance, yielding better model performance. For further reading on Gradient Boosting Machine, read this article.

Let’s get started with H2O.

Getting started with H2O

After installing the dependencies, install H2O using the following command:

This command will install the latest H2O version. To import H2O, use this code:

Initializing H2O will enable us to connect to the H2O clusters. Thus, we will use its memory for machine learning. When we run the code above, it produces the following output:

From the image above, we have successfully connected to the H2O cluster. It also shows the cluster version and the total free cluster memory. The next step is to load the dataset.

We will use the Amazon dataset. It has customers’ reviews of personal care appliances.

To download the dataset from tensorflow_datasets, use the following code:

From the code above, we use the tfds.load method to load the dataset from the tensorflow_datasets repository. We will then save the dataset into the train variable using the following code:

To see the dataset information, run this command:

From the image above, the dataset has over 130 million customer reviews. We will use the following columns as inputs:review_body, review_headline, star_rating, and helpful_votes.

After loading the dataset, we need to convert the Amazon dataset into a NumPy array using NumPy. A NumPy array is easy to manipulate and use.

Converting the dataset into an array

To import the NumPy package, use the following code:

We use Numpy to convert the dataset into an array using the following code:

To see the dataset array, run this code: 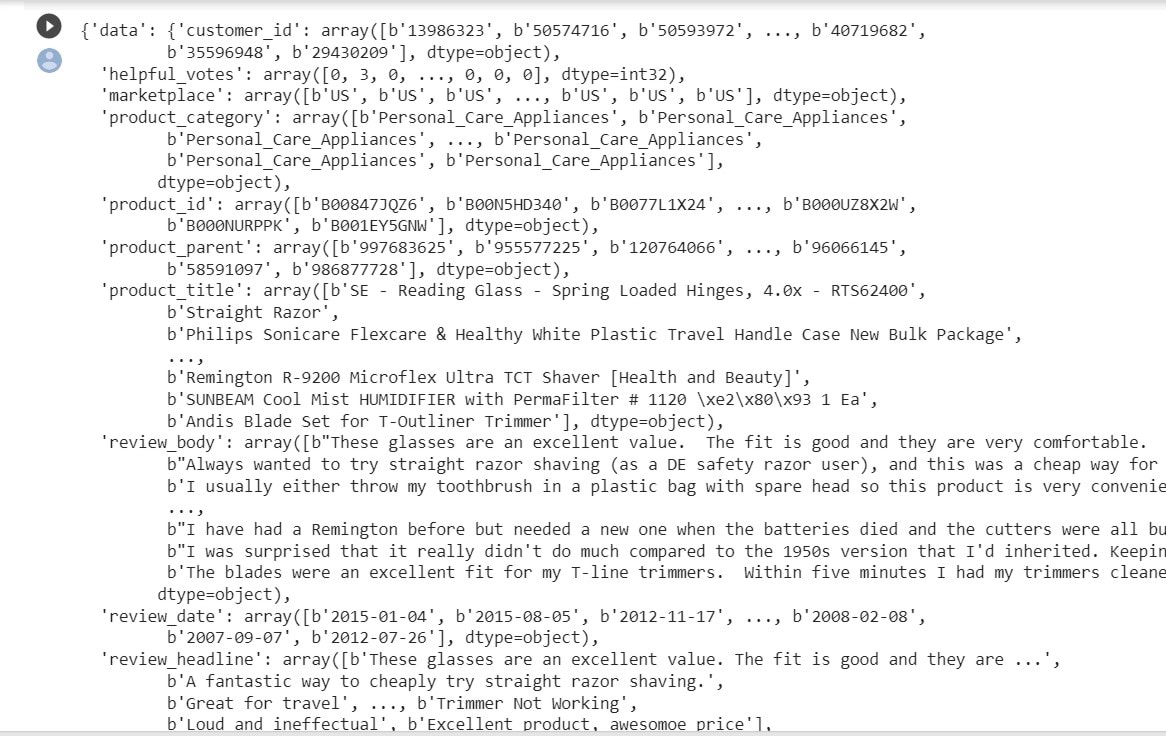 From the image above, the Amazon dataset is in a NumPy array. Next, we need to select the columns that we will use to build the sentiment analysis model.

To select these columns, use this code:

The code above selects four columns from our dataset. The four columns are the inputs for the model during the training phase. We will then create a DataFrame using the H2O DataFrame function. A DataFrame is a data structure that organizes data into a 2-dimensional table of rows and columns.

We will create the DataFrame using the H2O DataFrame function.

The code above will create a DataFrame using the h2o.H2OFrame function. The function is also assigned human-readable column names. The assigned column names are as follows: votes, headline, reviews, and rating.

To see the created DataFrame, run this code:

The code produces the following output:

For a customer review to be positive, the star_rating should be greater than 4. If the star_rating is less than 4, the review is negative. To add the output column, we will use this logic.

We use the following code to represent this logic:

When we execute the code, it will add the output column. To see the new data frame with the added output column, use this code:

The next step is to perform text preprocessing.

Text processing is an essential step in natural language processing. In-text preprocessing, we clean and remove noise from the dataset. Text processing makes our dataset ready for use by the model.

Some of the text preprocessing steps we will perform in this tutorial are as follows:

For a detailed understanding of all the steps in text preprocessing, read this article.

In this tutorial, we will only perform three steps. We will use the Natural Language Toolkit (NLTK).

We install the Natural Language Toolkit (NLTK) using this command:

To import the nltk use this code:

Stopwords are the most commonly used words in a given language. Stopwords carry very little information and have little impact on the model. Removing stop words will allow the model to focus on the unique words in the dataset.

We will use nltk to download the stop words of the English language.

We will then filter out the stop words from the dataset. We will create a single function that removes the stopwords, perform tokenization, and convert text to lower case.

We create the function using the following code snippet:

The function name is tokenize. In this function, the line.tokenize method performs tokenization. The tokenized.tolower method converts the text to lower case. (~ tokenized.isin(stop_words)) will tokenize words not found in the stop words list. It will filter out the stop words from the dataset. Then the function returns a clean text that has undergone all three steps. Let’s apply this function to our reviews and headline columns.

The reviews and headline columns contain text. To apply the function into these two columns, use this code:

To see the reviews column after applying the function, use this code:

To see the headline column after applying the function, use this code:

The steps above show how to remove stop words, convert text into lower case, and perform tokenization. The next step is to vectorize the tokenized text.

For further reading on how the H2OWord2vecEstimator algorithm converts the tokenized text to word vectors, read this documentation

We import the H2OWord2vecEstimator using the following code:

The H2OWord2vecEstimator algorithm trains a model that will perform vectorization. To use the trained model, we apply it to the words_reviews and the words_headline columns. The vectorization model produces the corresponding word vectors.

We will train the vectorization model using the words_reviews and the words_headline columns. We use the following code:

From the code above, we use the following methods and parameters:

-model_id = "w2v_amazon.model": It is the name of our vectorization model.

We then pass the training_frame as a parameter. It specifies the columns that train the vectorization model. We use both the words_reviews and the words_headline columns to train the model.

The code above will build our vectorization model.

To save the model, use this code:

After saving the model, we can now use it to transform/convert the tokenized text to word vectors.

We will apply the trained model to both the words_reviews and the words_headline columns. These two columns contain the tokenized text.

The vec_model.transform function converts/transforms the tokenized text to word vectors. The function has the following parameter:

To see the size of converted word vectors, use this code:

From the image above, we have converted the words_reviews column.

We also vectorize the words_headline column using the same process.

We will use the following code:

We use the same vec_model.transform function to vectorize the words_headline column. We also use the same aggregate_method = "AVERAGE" parameter to perform the vectorization.

To see the vectorized text, use this code:

From the image above, we have converted the words_headline column.

We will use the review_vecs and the headline_vecs as inputs for our model. We need to add/attach them to the original DataFrame.

Adding the vectorized columns to the data frame

We will add/attach the vectorized columns to the original h2o_df DataFrame using the cbind function.

The cbind function will add the review_vecs dataframe to the h2o_df. The same function also adds the headline_vecs DataFrame to the created h2o_df_ext.

We split the dataset into two sets. One for training and the other for validation using this code:

The model will learn from the training set to understand sentiment analysis. The validation set will fine-tune the model’s hyper-parameters in training.

We use the splitting ratio of .8. 80% of the data frame will be the training set, 20% will be the validation set.

Let’s use the Gradient Boosting Machine to train the model.

We will import the H2OGradientBoostingEstimator algorithm from the H2O library. It is the algorithm that trains the model.

Let’s initialize the H2OGradientBoostingEstimator. We will also set the hyper-parameters that will produce the best results.

The initialized H2OGradientBoostingEstimator algorithm has the following parameters:

After initializing the model, we feed the model with the prepared dataset.

Feeding the model with the dataset

To feed the model with the dataset, use this code:

From the code above, the train function trains the model. It has the following parameters.

The algorithm will train the model and give the best accuracy score.

To get the accuracy score, use this code:

The code above will print the accuracy score.

The accuracy score is 0.934, which is 93.4%. It is a high accuracy score and shows the model was well trained. We can now use this model to make predictions.

We use the model to classify a customer review as either negative or positive.

After vectorization, we use the vectorized text to make a prediction.

It produces the following prediction:

In this tutorial, we built a sentiment analysis model. We created the model using Gradient Boosting Machine and the H2O library. The tutorial also covers text preprocessing. We cleaned and removed noise from the dataset. Finally, we trained the model using the H2OGradientBoostingEstimator algorithm. The final model was able to make accurate predictions.