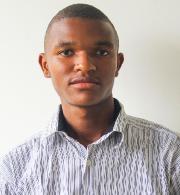 Bravin wasike holds an undergraduate degree in Software Engineering. He is currently a freelance data scientist and machine learning engineer. He is passionate about machine learning and deploying models to production using Docker and Kubernetes. Bravin also loves writing articles on machine learning and various advances in the technological industry. He spends most of his time doing research and learning new skills in order to solve different problems.

Pandas profiling is a Python library that performs an automated Exploratory Data Analysis. It automatically generates a dataset profile report that gives valuable insights. For example, we can know which variables to use and which ones we can drop using the profile report.

A machine learning pipeline is made of multiple initialized steps. It uses the steps to automate the machine learning development stages. The steps are initialized in sequential order so that one’s output is used as an input for the next. Therefore, the pipeline steps need to be well-organized for faster model implementation.

Many libraries support the implementation of a machine learning pipeline. We will focus on the Scikit-Learn library. The library provides a Pipeline class that automates machine learning. We will build a customer churn model using Pandas Profiling and Scikit-learn Pipeline.

To follow along with this article, a reader should:

How the Scikit-learn Pipeline works

Scikit-learn Pipeline is a powerful tool that automates the machine development stages. It has a sequence of transformation methods followed by a model estimator function assembled and executed as a single process to produce a final model.

The Scikit-learn Pipeline steps are in two categories:

It converts the raw dataset into a format that the model can understand and easily use. In addition, data transformation performs feature engineering and dataset preprocessing.

Feature engineering gets relevant and unique attributes from the dataset called features. The model then uses the features as input during training. Dataset preprocessing involves cleaning, formatting, and removing noise from the dataset.

Some of the most common activities involved in dataset preprocessing are as follows:

For a better understanding of the dataset standardization, you could read this article.

Estimators take the processed dataset as an input and fit the model into the dataset. Estimators then train the model, which will be used to make predictions.

We will use the telecommunication dataset that contains information about their customers. This dataset will train a customer churn model. To download the dataset, use this link.

After downloading the dataset, we load the dataset using Pandas. To import Pandas, use this code:

We can use Pandas to load the dataset.

We will view the loaded dataset using this command:

To install the Pandas Profiling library, use this command:

We will use Pandas Profiling to generate a profile report. The report will give the dataset overview and dataset variables.

We generate the profile report using this code:

The title of the generated report will be Churn Data Report. The profile report will have the following sections:

From the generated report, the dataset has 21 variables and 7043 observations/data points. The dataset has no missing values and duplication rows. The image also shows the variable types, which are categorical (13), boolean (6), and numerical (2).

This section shows all the dataset variables. In addition, it provides useful characteristics and information about the variables.

The outputs below show some of the important variables:

The interaction section has the following output:

These plots are the Phik (φk), Kendall’s τ, Spearman’s ρ, and Pearson’s r.

This section shows if there are missing values in the dataset.

This section displays the first 10 rows and the last 10 rows of our dataset. 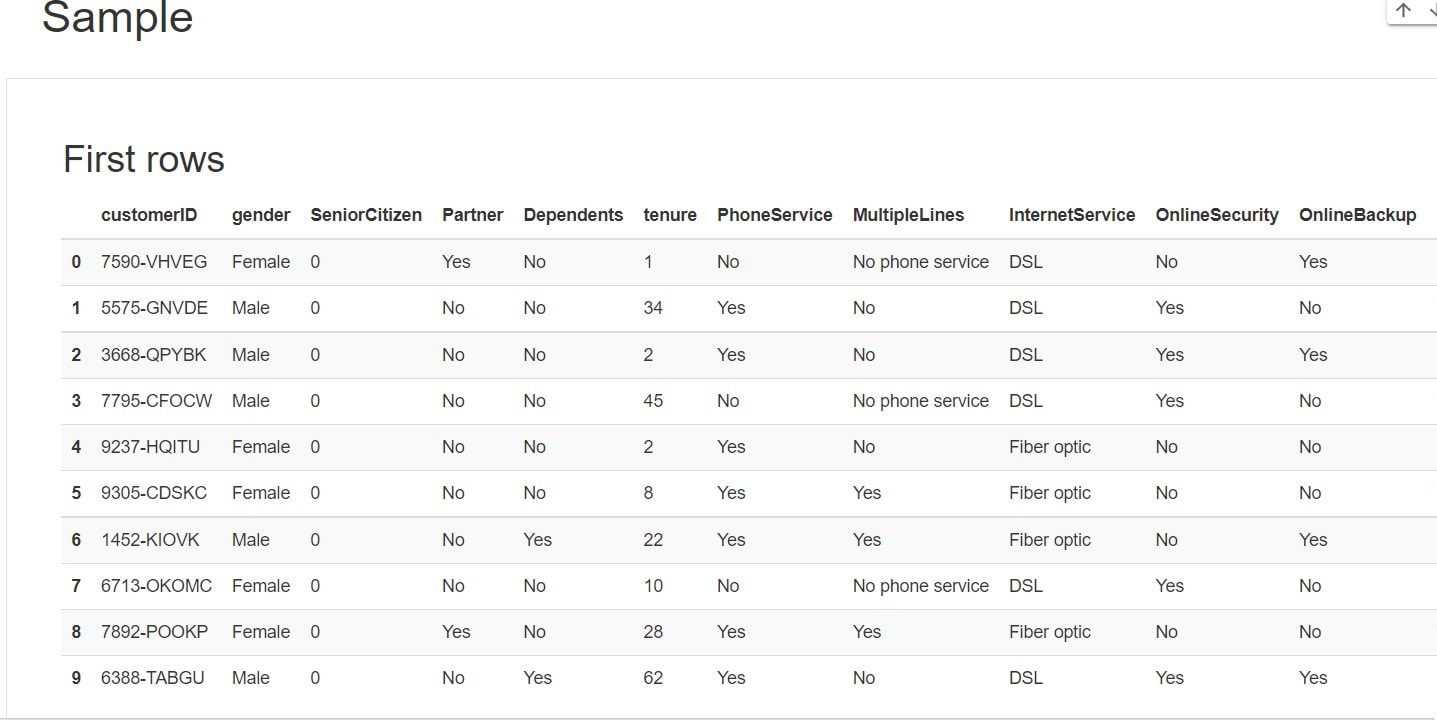 This marks the end of automated Exploratory Data Analysis using the Pandas Profiling. The library provides a descriptive analysis of our dataset and better understands the churn dataset. Let us now specify the X and y variables of our dataset.

The X variables represent all the independent variables in a dataset which are the model inputs. The y variable is dependent, which is the model output.

To add the X and y variables, use this code:

From the code above, the Churn variable is the y variable, and the remaining variables are the X variable.

Let us import the method used for dataset splitting.

We will split the dataset into two sets using the following code:

We use test_size=0.30 from the code above, which is the splitting ratio. 70% of the dataset will be for model training and 30% for model testing.

Using Pandas Profiling, we were able to see that the dataset has three variable types. The variable types are: categorical (13), boolean (6) and numerical (2).

We need to specify the columns that belong to these variable types. We use the code below:

The code selects the columns that have categorical and numerical values.

We select all the unused columns using the following code:

As mentioned earlier, the Scikit-learn Pipeline steps has two categories. Transformers and Estimators. The pipeline will have a sequence of transformers followed by a final estimator.

From the code above, we have imported the following transformer methods:

For a better understanding of the dataset standardization process, read this article

For a better understanding of OneHotEncoder, read this article.

Let us now create our first transformer using these methods.

The first transformer will drop the unused columns.

The unused columns are in the drop_feat variable. The remainder='passthrough' will enable the model to use the remaining columns in the dataset.

We import the Pipeline class as follows:

The Pipeline assembles all the initialized transformers and the final estimator. It then executes them as a single process to produce a final model.

To add the drop_transformer, use this code:

Next, we fit the pipeline.

It fits the model to the training set. It produces the following output:

The output shows the drop_transformer added to the Pipeline class. The next step is to use the transform method to drop the unused columns.

To see the transformed dataset, use this code:

The numeric transformers will perform data imputation and standardization.

To initialize these transformers, use this code:

From the code above, SimpleImputer will perform data imputation. strategy='mean' replaces the missing values using the generated mean in each column. The StandardScaler() method performs data standardization.

We then combine these initialized transformers.

We use the following code:

Let us add it to the Pipeline class.

To add the col_transformerto Pipeline class, use this code:

Next, we fit the pipeline to the train set.

To see the transformed dataset, use this code:

Applying the transformers to test dataset

To see the transformed test dataset, use this code:

The last step in the Scikit-learn Pipeline is to add an estimator. An estimator is an algorithm that trains the machine learning model. We will use the LogisticRegression as the estimator.

To add the estimator to the Pipeline class, use this code:

From the image above, the Pipeline class has all the transformers (col_transformer) and the final estimator (LogisticRegression).

Let us fit the model into the dataset.

To fit the pipeline, use this code:

The pipeline will identify patterns in the training set.

Getting accuracy score on the training set

To get the accuracy score, use the following code:

It is a good accuracy score and shows the model has a 79.533% chance of making correct predictions.

Let us evaluate the model using the testing set.

Getting accuracy score on the testing set

We get the accuracy score using the following code:

After this process, we implemented our transformers using Scikit-learn transformer methods and classes. Then, we stacked these transformers together, and the other added a final estimator. Finally, we trained the customer churn model using the Telecommunication dataset.

The model had a good accuracy score using the training and the testing dataset. To access the complete Google Colab notebook for this tutorial, click here.