Florence Akinyi is a Computer Science undergraduate with a passion for the magical field of Computer Science. She holds interest in exploring various fields of CS ranging from web and app development to Artificial intelligence and Cyber-Security. She loves getting lost in the world of books and in the beauty of nature. In her free time she engages in community works.

Linear Time Invariant (LTI) systems are a significant part of the signal processing toolbox that defines the action of a physical system on the signal.

Filters are examples of the LTI systems. In this system, the input is called the “Excitation”, and the corresponding output is the “Response”. The basic principle of such a system is linearity and time invariance.

When you combine all the inputs and their corresponding outputs, it’s linearity. When the system depends on the time, but not on the time function, it is time invariance. A graphical user interface (GUI) associates the user and the system without having to know what the system entails. It abstracts the functionality of the system, thereby acting as an interface for navigating.

In this tutorial, we will create an LTI system analyzer with a simple GUI. The analyzer should be capable of analyzing time, impulse, and ramp response. It will also make bode plots, magnitude plots, and pole-zero plots.

To follow along with this tutorial, you’ll need to have:

By plotting a graph of the input and output graph, if we get a straight line, we call it Linearity. LTI systems are characterized entirely by a single function called the system’s impulse response. The system impulse response is the response of an LTI system for a unit signal input at applied at t=0.

For any input x(t) or x(n), the output can simply be obtained by convolution of input and the impulse response h(t) or h(n) as shown:

Convolution is the addition of two signals to form a third signal. This is how your complicated convolution becomes the easy multiplication in the frequency domain. To understand more about Laplace transform, you can refer to here.

For discrete systems, we have:

There are various analyses performed on LTI systems.

Some basic analyses are shown below: 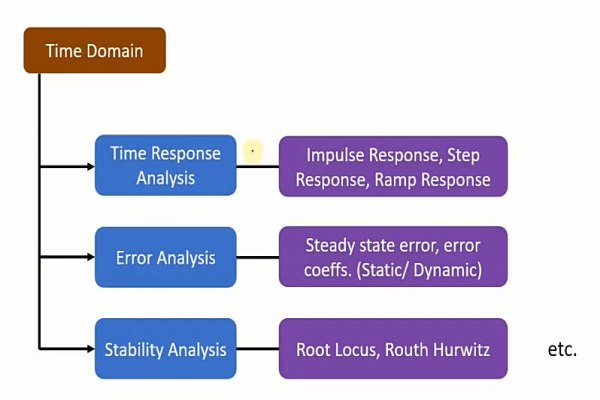 If we consider the time domain, we have the three analyses:

We consider the steady-state error/error coefficients for error analysis, concentrating on the root locus for stability.

Considering the frequency domain, we have: 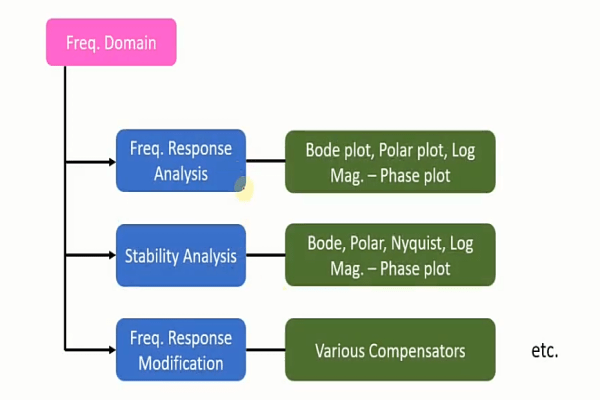 Our objective is to develop a GUI in Matlab to implement the following analysis of any LTI system: 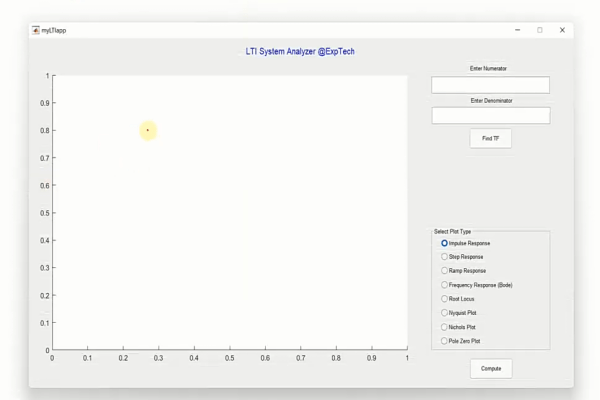 The above GUI image is a sample of what we are going to build using Matlab. The axes show the plot. When you enter the numerator and the denominator and press the push button find TF, the transfer function is displayed below the push button.

In the numerator and denominator edit box, only enter the coefficient of your function.

The figure below shows the expected behavior: 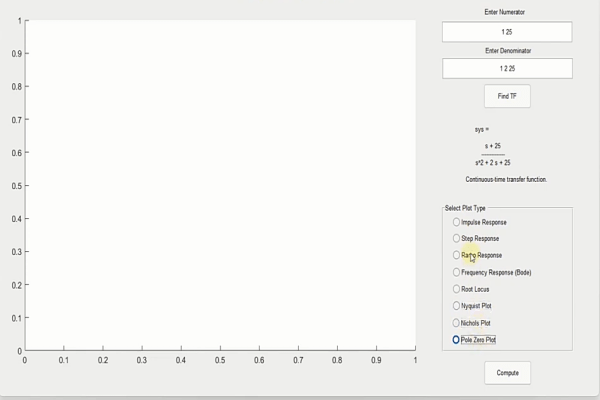 When we click find TF, we expect the results above:

To open the guide, we execute the command guide on the command window and open a blank GUI.

You can read more about the MATLAB GUI here. It is highly recommended to read through this article since it introduces you to building a GUI and explains various functions that are used for building them.

Double-click the component to add the labels and the tags for each component, and a new window property inspector as shown below: 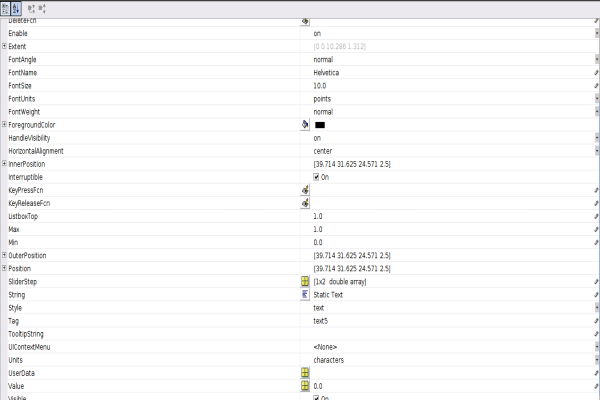 This property inspector enables you to modify/edit the properties of various components according to the desired values.

While doing this, ensure you take note of the tag of each component. This tag is used to link the GUI and the components.

Note that you can change this tag to anything you wish as long as you can easily remember them.

The string of the components can be the same, but the tags should be unique since the callbacks functions are identified using tags.

Callback functions are the codes that render the functionality of the codes. After adding all the component labels, click the run icon on the top of your GUI to give you the final layout, as shown below: 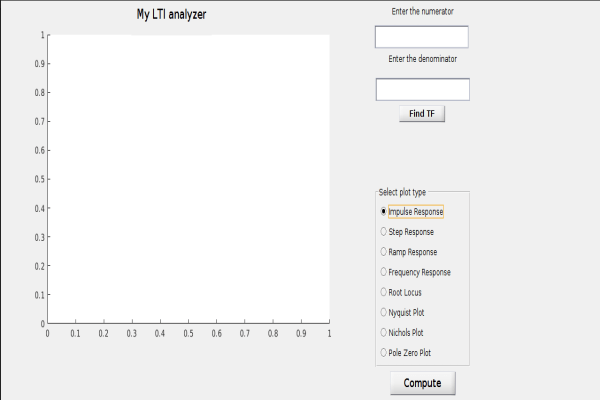 When you click the run icon, Matlab autogenerates a script containing the GUI code. This autogenerated code is where we are writing the callback for our components.

We only add codes to the callback section, not the CreateFcn. 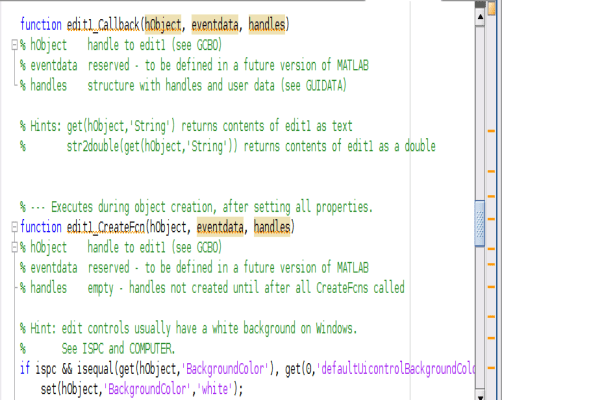 To do this, go back to the GUI layout and right-click on the button group, and select the view callback. It opens a new selection and on this new selection, select selectionChangedFcn. 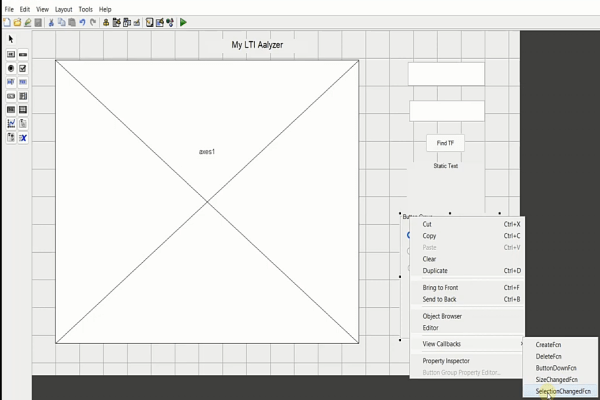 When you do this, Matlab writes the callback for the components.

Edit1 and edit2 callback (Enter the numerator, enter the denominator)

This code is similar to that of editbox2. They all perform a similar function of getting the input from the user:

We only change the variable from num to den, since we accept a value for the denominator.

When you press this button, the transfer function should be displayed in the text6 box. The callback is:

Here, we are using a switch control statement based on get(eventdata.NewValue, 'Tag') that assigns the respective radio buttons strings based on the tag. Then, you update the handles.

Here, we use the switch control statement to write the response of each plot type.

For example, if the user chooses 1 which is the impulse response, then that is the output that they should get.

This code is similar to that of case one. The only difference is instead of using the impulse function, we used the step since it is a step response.

Case 3 is for the ramp response. Now, Matlab has no inbuilt function for calculating this. But, we can get it from the step response. This is possible by multiplying the den by $\frac{1}{s}$ then finding the transfer function of this modified function.

step(tf(handles.num, handles.den)) gives us the first step response of our function using the step function. This response is then initialized by T=t0 since we use it to find the second step response (ramp).

Using the denominator of our first step response function, we get the second transfer function [y, t]=step(tf(handles.num, den1)) and then plot the output using the plot function.

case 5 is for the locus response. Matlab has an inbuilt function rlocus for computing it.

Both case6 (nyquisit) and case7 (nichols plot) have inbuilt functions for executing them:

Case8 is the pole-zero plot. Here, we use the pzmap function. Matlab’s default pzmap creates a very dull-looking plot. This is because the markers are small and are difficult to see and so we modify their plots.

We have modified the marker colors h(2).Color='b' and h(2).Color='r' to differentiate. We also make the marker sizes large h(2).MarkerSize=15. pzmap is an inbuilt function that uses the transfer function as the argument.

Before running your program, these callbacks have to be inserted in their respective callbacks.

You can find the full code here.

When you click on the Find TF, we see the transfer function displayed as shown below: 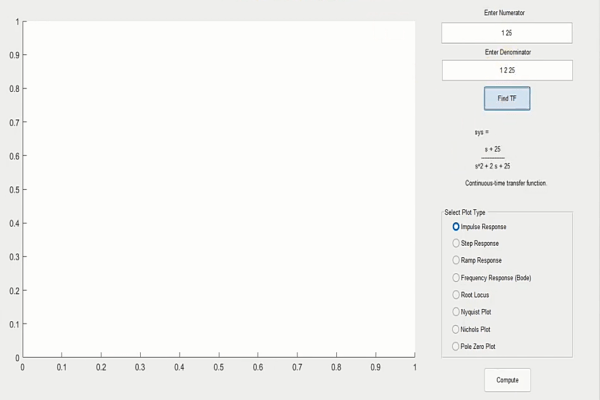 When you select, for example, impulse response and press the compute button, we see the plot is displayed in the axes. You can do this for other plot types. 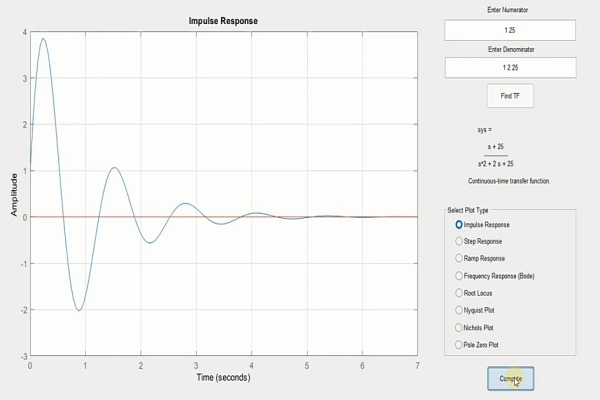 If you choose bode plot, you will have: 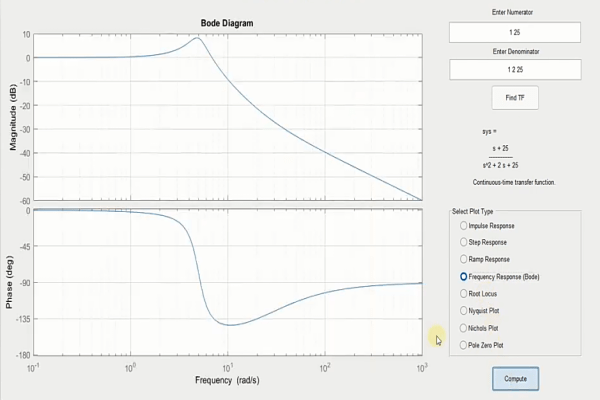 For more details on the LTI systems, you can check here.

In this tutorial, we learned to analyze LTI systems easily by just inputting the numerator and the denominators. Also, it can help you when doing some numerical analysis and use it for verifying your answers.

Furthermore, the numerous in-built Matlab functions make the creation of this GUI easier.