Michael Kunze invented the term LAMP stack in 1998. It is used as a kernel for websites that are hosted by Linux. It can also create web pages, web applications, static pages, dynamic pages, etc.

All the layers use Free and Open-Source Software (FOSS). Linux Operating System, Apache Web Server, MySQL Database, and PHP programming language are the LAMP Stack’s primary components. We can consider different software alternatives for each layer based on various prerequisites. 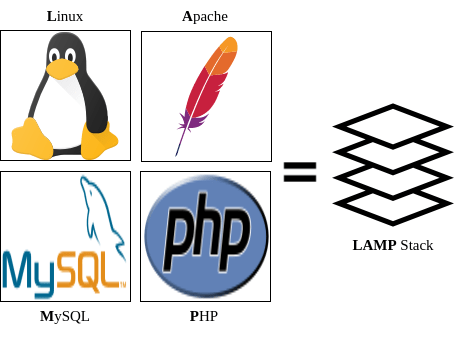 Solution Stacks are a combination of software or application programs used to form a computing platform. They are intended to provide web applications the appropriate framework. Technically, multiple developers develop, maintain, and handle the various components of a stack. Yet several developers can run all the components of a solution stack.

They are referred to as Full-Stack developers. The stacks are often named after the components used in them, which result in an acronym. This naming style helps to remember the elements used and to describe the stack components as a whole. In this article, one stack we will discuss is - the LAMP Stack.

All the layers of the stack are dependent on each other. They work together to provide a perfect structure for any web application. Let’s take a detailed look at all four layers.

Linux: The OS (Operating System) makes up the first layer. The stack paradigm base is set by Linux, that serves as the host for web applications. Operating System is the stack’s lowest layer, and all other layers operate on top of this layer. Making it the backbone of the LAMP stack.

Linux is preferred because of its customizability and easy-to-use technology. However, the OS layer is not strictly restricted to Linux. We may use other alternatives such as Windows, Mac OS, Unix-like. The stack name changes based on the OS used - WAMP (Microsoft Windows), MAMP (Mac OS), SAMP (Solaris), XAMPP (cross-platform) to name a few.

Apache: The web server is the second layer of the stack. A web server is a server software that fulfills client demands on the World Wide Web. The correspondence between client and server is then achieved using the HTTP (HyperText Transfer Protocol).

Its main purpose is to accept the users’ incoming HTTP requests and provide them the relevant web pages depending on their search query. Apache HTTP server is the preferred software for this layer. It is one of the most popular web-based HTTP clients.

Internet Information Services(IIS) by Microsoft is an alternative server software for Apache. This operates on the Windows operating system, resulting in a WIMP Stack (Windows + IIS + MySQL + PHP). According to a survey by Netcraft, as of November 2020, Apache now powers 28.9% of the world’s top million websites.

MySQL: The third layer is the database layer. This layer contains Database Management System (DBMS) software. This layer facilitates data storage, and for the LAMP framework, it’s provided by MySQL. A query is a search for information or data stored in the database.

Here, MySQL acts as a container and stores everything that can be queried by the user. This layer can collectively include user accounts, user details, product names with descriptions, and even website statistics. Web administrators may need to regularly change their website content, and users may need to modify their content. Database layer’s inclusion can do this.

For instance, the comments section for any application is solely meant for the users. The users provide their content as comments, so the database can update itself dynamically.

Other alternatives can be considered such as PostgreSQL, which results in a LAPP Stack (Linux+ Apache+ PostgreSQL+ PHP) and even NoSQL databases such as MongoDB.

The codes written in scripting languages are dynamic and embedded in HTML. It also helps extract the data from the third layer, i.e., the database layer.

The data is then sent back to the user as “search results” through the second layer, i.e., the web server. Web applications are operated within this part of the LAMP stack. Other scripting languages used for web programming are Perl and Python.

A thorough look at the LAMP arrangement tells us how the components work together.

Let’s assume we search “Sports news” in the browser. It all begins when the user requests web pages (about sports news) from their browser (Chrome, Firefox, Safari, to name a few). These requests are received by the web server (Apache in this case).

The request is transferred to PHP by Apache. As discussed above, PHP, which is embedded into the HTML code, manages dynamic pages, tracks user statistics, and analyzes their data. The code written in the PHP file is executed, and the data from the database is sent back together as HTML pages.

These HTML pages are shown as search results in web browsers. Let’s consider another instance where we need “Yesterday’s Sports news.” Websites that provide news have an archive system where the old data is stored. In this case, the archive system is stored in the MySQL database.

If the user prompts yesterday’s news, PHP reruns the file code and interacts with MySQL to retrieve the old data. Then it is sent back to the browser through the web server. Finally, all these functions need one main component to work with - the operating system.

The operating system acts as the backbone of any stack (Linux in this case). A simple flowchart below may help you better understand the working of the LAMP stack. 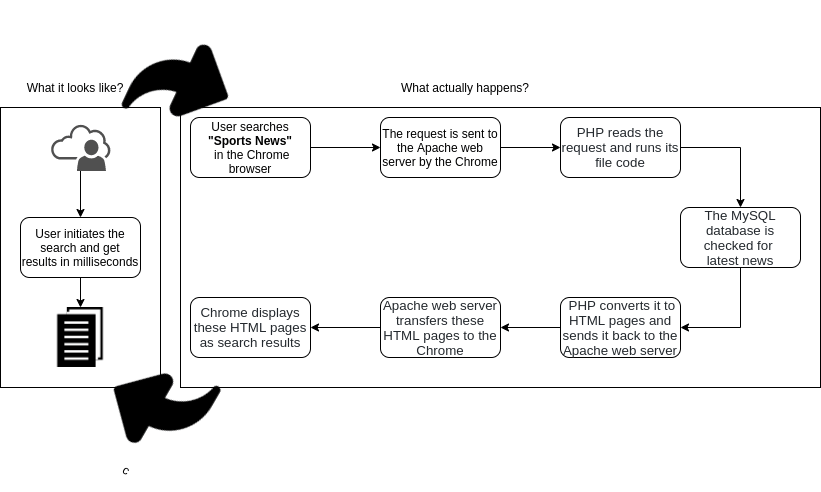 Web applications such as Wikipedia and WordPress are built using the LAMP framework. However, Wikipedia uses a personalized structure of LAMP, which includes an add-on - the LVS (Linux Virtual Server).

LVS handles the network traffic distribution systematically by diverting the incoming HTTP request to the available server. This helps with the smooth transmission of data and reduces network latency.

All four components of the LAMP stack are FOSS (Free and Open Source Software), so money does not need to be spent on proprietary software. The source code of FOSS can be shared and reused for additional developmental purposes.

This helps make modifications and enhancements to improve the websites further. The LAMP framework is so stable that even after personalizing and customizing the stack, it still works smoothly. This makes the LAMP stack ideal in web application development.