An intelligent agent (IA) is an entity that makes a decision, that enables artificial intelligence to be put into action. It can also be described as a software entity that conducts operations in the place of users or programs after sensing the environment. It uses actuators to initiate action in that environment.

What is an Intelligent Agent (IA)?

This agent has some level of autonomy that allows it to perform specific, predictable, and repetitive tasks for users or applications.

It’s also termed as ‘intelligent’ because of its ability to learn during the process of performing tasks.

The two main functions of intelligent agents include perception and action. Perception is done through sensors while actions are initiated through actuators.

Intelligent agents consist of sub-agents that form a hierarchical structure. Lower-level tasks are performed by these sub-agents.

The structure of intelligent agents

There are 5 main categories of intelligent agents. The grouping of these agents is based on their capabilities and level of perceived intelligence.

These agents perform actions using the current percept, rather than the percept history. The condition-action rule is used as the basis for the agent function. In this category, a fully observable environment is ideal for the success of the agent function.

These agents have higher capabilities than model-based reflex agents. Goal-based agents use goal information to describe desirable capabilities. This allows them to choose among various possibilities. These agents select the best action that enhances the attainment of the goal.

These agents make choices based on utility. They are more advanced than goal-based agents because of an extra component of utility measurement. Using a utility function, a state is mapped against a certain measure of utility. A rational agent selects the action that optimizes the expected utility of the outcome.

These are agents that have the capability of learning from their previous experience.

Learning agents have the following elements.

The following diagram shows how these components are positioned in the AI system.

Inputs (percepts) from the environment are received by the intelligent agent through sensors. This agent uses artificial intelligence to make decisions using the acquired information/ observations. Actions are then triggered through actuators. Future decisions will be influenced by percept history and past actions. 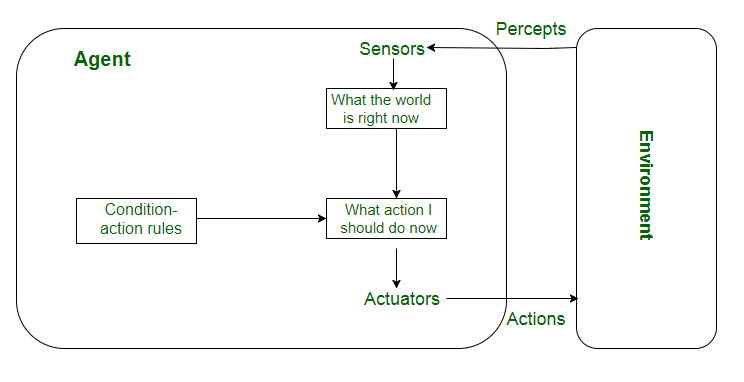 Intelligent agents in artificial intelligence have been applied in many real-life situations.

Some companies have automated certain administrative tasks to reduce operating costs. Some of the functional areas that have been automated include customer support and sales. Intelligent agents have also been used to enhance office productivity.

Intelligent agents have also been applied in healthcare services to improve the health of patients. In this case, the patient is considered as the environment. The computer keyboard is used as the sensor that receives data on the symptoms of the patient. The intelligent agent uses this information to decide the best course of action. Medical care is given through actuators such as tests and treatments.

AI agents are also used to enhance efficiency and cleanness in vacuum cleaning. In this case, the environment can be a room, table, or carpet. Some of the sensors employed in vacuum cleaning include cameras, bump sensors, and dirt detection sensors. Action is initiated by actuators such as brushes, wheels, and vacuum extractors.

Intelligent agents enhance the operation of self-driving cars. In autonomous driving, various sensors are employed to collect information from the environment. These include cameras, GPS, and radar. In this application, the environment can be pedestrians, other vehicles, roads, or road signs. Various actuators are used to initiate actions. For example, brakes are used to bring the car to a stop.

Intelligent agents make work easier by performing certain time-consuming and difficult tasks on behalf of systems or users. These agents are making the automation of certain tasks possible.

With increased technological advancement, there will be enhanced development of intelligent agents. This will further translate into complex AI-driven devices that will solve current global challenges. There seems to be no limit to this intriguing technology.