Huffman coding is a lossless way to compress and encode text based on the frequency of the characters in the text. In computer science and information theory, Huffman code is a special type of optimal prefix code that is often used for lossless data compression.

The algorithm was developed by David A. Huffman in the late 19th century as part of his research into computer programming and is commonly found in programming languages such as C, C + +, Java, JavaScript, Python, Ruby, and more. The thought process behind Huffman encoding is as follows: a letter or a symbol that occurs frequently is represented by a shorter code, and a letter or symbol that occurs rarely is represented by a longer code. This leads to an efficient representation of characters that require less memory to be stored. This means Huffman coding can be used as a data compression technique.

In this article, we are going to cover the following:

Huffman coding is based on the frequency with which each character in the file appears and the number of characters in a data structure with a frequency of 0. The Huffman encoding for a typical text file saves about 40% of the size of the original data. We know that a file is stored on a computer as binary code, and that each character in the file has been assigned a binary character, and character codes usually have a fixed length for different characters. Huffman binary code, such as compiled executables, would therefore have a different space-saving. A binary file in which an ASCII character is encoded with a frequency of 0.5 would have a very different distribution and frequency from its ASCII counterpart.

To compress a file with a sequence of characters, we need a table that gives us the sequences of bits used for each character. This table creates an encoding tree that uses the root/leaf path to create a bit sequence that encodes the characters. We can follow the roots and leaves to create a list of all characters with the maximum bit length of the encoded characters and the number of occurrences.

To construct an optimal tree, we use a greedy algorithm. Huffman encoding trees return the minimum length character encodings used in data compression. The nodes in the tree represent the frequency of a character’s occurrence. The root node represents the length of the string, and traversing the tree gives us the character-specific encodings. Once the tree is constructed, traversing the tree gives us the respective codes for each symbol.

The optimal tree upon completion is given in the image below: 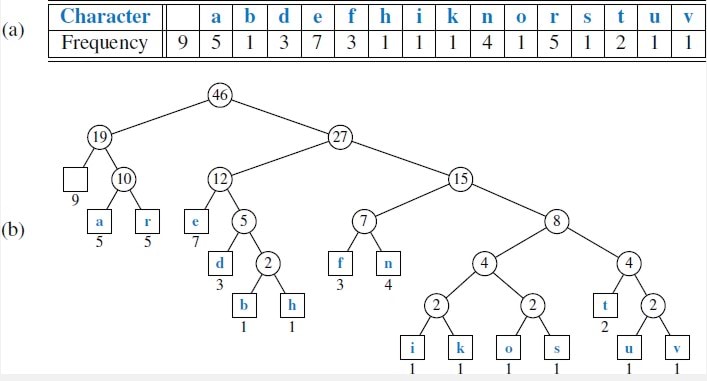 We will develop and implement a program that uses Huffman coding in the next section.

We first define a class called HuffmanCode which is initialized with probabilities. Let us look at the flow of the code implemented below:

Let us look at the algorithm used to compute the Huffman codes.

Let us now look at the code. There are a couple of functions defined inside the class which will be explained in the section below.

We have a couple of auxiliary functions such as find_position and characteristics_huffman_code. find_position is used to insert bits to the existing code computed in the n-3 previous iterations, where n is the length.

The second auxiliary function defined is characteristics_huffman_code. This function generates the mean length of the codes, entropy, variance, and efficiency. Let us look at each of these in detail

In this article, we have discussed what Huffman coding is, some of its applications, and have also considered a code snippet that encodes a given text based on the frequency of characters. I hope you have enjoyed the article. I suggest you implement the code and use this guide as you code-along.