How to Perform Threading Timer in Python

Threading allows multiple tasks to run concurrently. For example, when task A is running, I do not have to wait for it to complete. Meanwhile, tasks B, C will also be running. When the tasks are running simultaneously, they require multiple CPUs.

To run threads concurrently Python uses a technique known as task switching. As a result, Python switches between each task rapidly. Making it seems like multiple tasks are running in parallel, making it useful in event-driven tasks. The thread being lightweight, it requires less memory thereby saving on CPU resources.

How to perform threading timer in Python

A thread has an entry, an execution, and an exit point. The Python library contains a timer, a subclass of the “threading” class used for code execution after a limited period.

Threading in Python Timer() starts following the delay defined as an argument. The Timer class thus calls itself delaying the execution of the following operation by the same amount of time specified.

To follow along the reader will need the following:

After every specified number of seconds, a timer class function is called. start() is a function that is used to initialize a timer. To end or quit the timer, one must use a cancel() function. Importing the threading class is necessary for one to use the threading class. The calling thread can be suspended for seconds using the function time.sleep(secs). 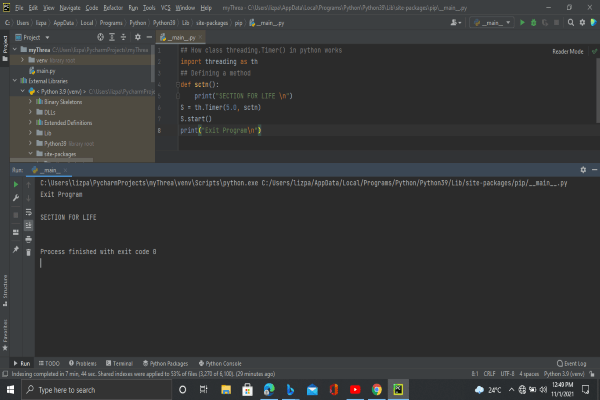 In this second example, I will show you how to implement the suspend method cancel(), which we had seen earlier to end a thread.

The latest threading module included with the current Python 2.4 provides a much more powerful and higher-level support for threads than the previous thread module.

The threading module exposes all the methods of the thread module and provides some additional functions as depicted below:

Creating and using the timer class

The beauty of threading is that you can tell the computer to perform a task some other time or do it simultaneously. You can also execute the code simultaneously on different threads, making it extremely powerful. A timer class always runs in intervals.

The Python Timer class is used to perform an operation or have a function run after a specified period has passed. The threading class has a subclass called the class timer. In technical terms, we will create Timer objects when we need time-bound actions (methods), in technical terms.

To use Timer class we will first have to import the time module. The args parameter is always preferably used to declare arguments to the functions to be called.

While working with a Python decorator, will know how to extend the Python Timer for it to be reused. The importance of using decorators is that it gets implemented once, and the function gets timed every time.

When the code is run the output should be:

In this article we have learned the following: