A lover of technology. An upright individual not afraid of getting out of the comfort zone and trying out new things.

How to Consume Data from an API in a React application

API is the acronym for Application Programming Interface, which is a software intermediary that allows two applications to talk to each other. APIs typically serve data. You can either build your API or use third-party APIs. You need to make network requests to communicate back and forth between the API and your application.

In this tutorial, you’ll learn how to consume data from an API in a React application.

To follow along in this tutorial, you must have a basic understanding of how to use React and JavaScript.

You can learn more about React from here.

Step 1: Understand the data from the API

Before consuming data from an API, it’s important to understand the data that the API provides. Data from an API is commonly presented in a JSON format. This makes it much easier for it to be consumed in the application.

In this tutorial, we will be using OMDb API. You need an API key to gain access to this API. This API key can be generated from the OMDb API’s website. 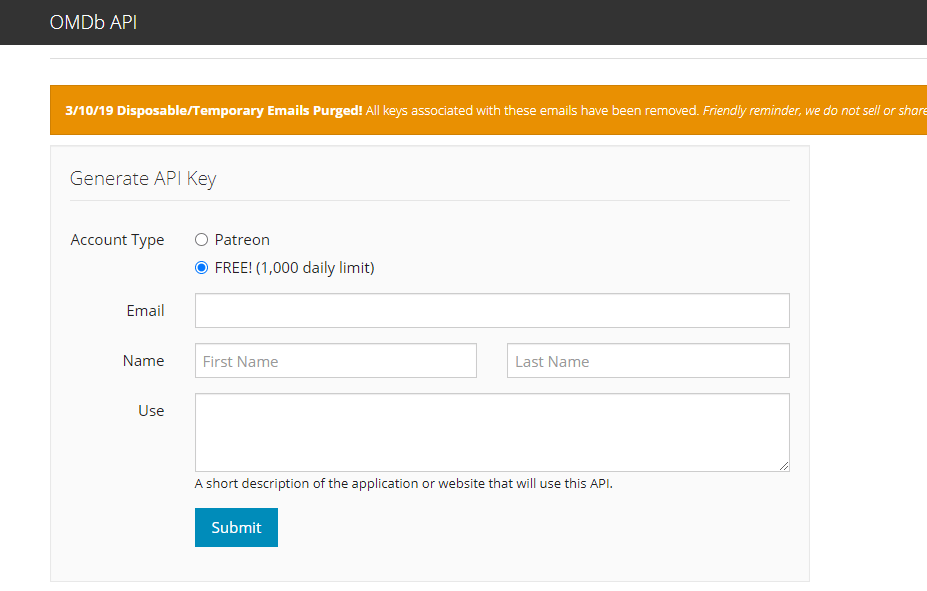 The API key will be sent to your email, as shown below.

Note that the API key must be included in the API request, as shown:

When we navigate to the above link in a browser, the endpoint will return the JSON data as shown below.

In the above JSON response, we have data like the Title, Year, Rated, Released, Runtime, Genre, etc, of the movie Guardians of the Galaxy Vol. 2.

Once you run the above statement, it’ll take a few minutes to install the required dependencies. Once the project is created, you can open the folder in your preferred code editor.

All the files that we’ll be working with are located in the src folder. These files will be compiled and shown to the user.

The image below shows the overall structure of the React application.

Use npm start to start the development server. By default, the react projects are usually hosted at http://localhost:3000/.

We’ll write all of our code in the App.js. Modify the App.js file to look like this before we start.

We should import useEffect and useState into this component.

The useEffect hook allows React to perform a specific action when the state changes. In our case, we will use useEffect to make network requests to the API when the component mounts for the first time.

The useState hook will help create a state and a function to update that state. When you update a state, the component will re-render.

Let’s create a state for the movie. The movie state will hold the object or data returned from the OMDb API. The setMovie helps in updating the movie state.

Next, let’s create a state to hold the search input from the user. This value is updated by the setSearch function whenever the user enters a value in the input field.

The search query value is added to the search URL.

The App component will also has several functions.

This method will be called whenever the search button is clicked. It will request the API and return a movie object.

A Promise is a proxy for a value not necessarily known when the promise is created. It allows you to associate handlers with an asynchronous action’s, such as eventual success value or failure reason.

A Promise can either be in one of the following states:

When a Promise is pending, it can either be completed successfully or rejected. The then method helps handle any of the resulting states.

Here is an example of handling a promise:

As shown above, we handle the Promise if it is rejected in the catch block.

The getMovie is an async function. An async function is a function declared with the async keyword. Async functions are instances of the AsyncFunction constructor, and the await keyword is allowed within them.

The await keyword allows you to wait for a Promise to get resolved.

The above function will wait for the promise to be returned from the network request to be resolved and will print the response from the request.

You can learn more about async, await, and promise from here. This tutorial uses async and await methods.

We can handle server and network errors using a try/catch block. We send a network request inside the try block. If an error occurs, the catch block will be executed.

Here is the code for the getMovie function.

This method is also executed when the component is rendered for the first time using the useEffect hook to load some initial data.

After we fetch the data, we should display it to the user. In the App.js file, we should include an input field and a button for search. The page also has an image, title, and paragraph tags. Here is the code for our app’s layout.

As shown above, the getMovie method is called whenever the button is clicked.

The onInputChange function is called when the value of the input changes.

Errors are a common occurrence when dealing with an API. For this tutorial, we need to notify the user in case a movie is not found in the database. One key variable we can use to track the data is Response.

The API returns the Response with a value of True when a movie is found and False if it’s unavailable. We therefore, check the state of this variable.

To do this, we need a new method and an if-else statement. Create a method named checkResponse in the app.js file. Add the following code.

A No Movie Found message is displayed in case the response is False.

Note the Response variable stores a string rather than a boolean.

We need to replace the following code:

Here is the App.js code with the error handling part included.

If you have successfully reached this stage, congratulations. Follow the steps in the video below to test out the web application.

In this tutorial, we have learned how to fetch and consume data from an API. We use async and await when performing network operations. You can refer to the final code from this GitHub Repository.