Carol is a software developer and data engineer. She loves writing code and tech tutorials.

How to Build a Client Server Application using Rust

A web app is a service built on top of the Internet to allow computers to share and exchange data easily and reliably. In this case, the web services will be referred to as a client-server model. Communications are established between the two to exchange data. Clients will ask for data, and the computer that serves this data is called a server.

In this tutorial. we will discuss the concept of the client-server model as we implement the whole scenario using Rust.

Rust is a very low-level/systems-level programming language like C++ or C. It focuses on safety, speed, and concurrency, ensuring you have a design that lets you create high-performance programs. To start using Rust, you need to get a Rust C, which is the Rust compiler.

If you are using Visual Studio 2013 or older, then you have to install the Microsoft C++ build tools. Please ensure the Windows 10 SDK and the English language pack components are included when installing the Visual C++ Build Tools.

Alternately, you can install a new version of Visual Studio, and during installation, select the “C++ tools”. 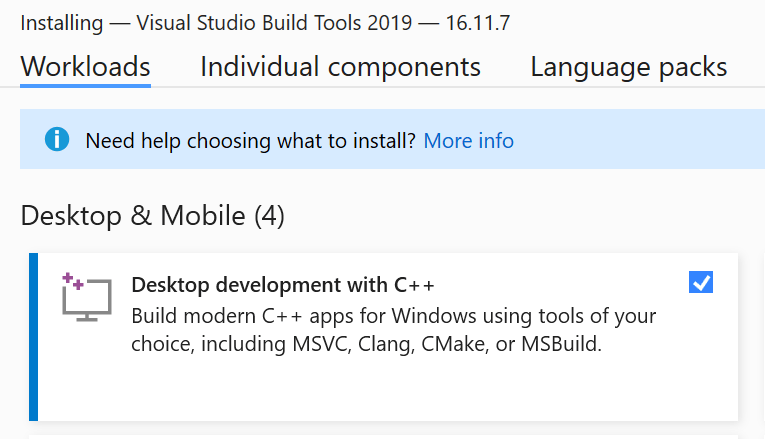 Wait for the installation to finish. Then go ahead and Download Rust C and install it on your computer. Check the Rust doc and select the Rust installation that fits the environment you are using.

This will install along with the Rust cargo. Cargo is a Rust package manager that allows you to access remote Rust packages. Cargo is closely related to NPM for Node.js, composer for PHP, or PyPI for Python.

Once Rust is installed, you can run the following to verify if the toolchain for the Rust development environment is correctly installed.

Let’s see how you can set up a basic Rust project. To create a Rust project, you use cargo to initialize your application.

You can also use cargo new my_app. This will create a new project in a folder called my_app.

A Rust application structure will be created in any of the above methods. This has a Cargo.toml file that has your basic application configurations and Rust packages/dependencies that you will install. This looks similar to the package.json file for Node.js. It also creates an src folder where your Rust code goes. This folder has a main.rs with a basic Rust Hello, world! application.

To test this, you can run cargo run inside the folder you initialized the Rust project. This command will compile, run the application for you and print the result on your terminal.

If you have a problem setting up Rust, check this tutorial and learn how to install the rust utilities and tools to compile and create your rust programs.

We need a couple of Rust modules to set up this server and client. These include:

Create a server with Rust

Create a project folder and name it client_server_app. To start setting up a Rust server, initialize a Rust project. To do this, run cargo new server. This will create a server folder with the Rust program configurations. Let’s dive and start writing some Rust code for a Rust server. Head over to the server’s src folder and start working on your main.rs file.

Add these modules to your main.rs file, as shown below.

Before setting up a server, the server needs to handle the client’s messages. The server must first access these messages then decide what operation to perform.

First, the server will access the streams/client messages and hold them in the stream’s state. The server will accept any message with a range of 0 to 512-bit in size. These messages are mutable and can be sent by different clients. This will allow multiple clients to connect to this server at once. TcpStream will allow accepting new clients’ connections to this server. If the connection is valid, Ok(()) will be executed to verify that this connection to the stream address actually worked.

Once these connections are established, the server will read messages into our set buffer. This will take the message that we’re receiving, handle all the characters that are not whitespace inside this buffer as a String. Then, to complete the read-write operation, the server will convert this String into an actual utf8 string and then print the message to the server’s terminal.

The server will constantly loop around the connected clients. This can create permanence overhead. Therefore, we need to set a time::Duration that allows the server to sleep for a moment when looping through the sent messages.

Here we are instantiating our server using the TcpListener. This way, the server may listen for new connections and assign them to a server socket address. If it fails to bind with the new connection, then we’re going to return an error message.

Once the connection is made, we want to basically set what should happen when our server receives a message. We will collect all the incoming messages to our stream and bind them to a server socket address. We then put these messages into a heap in the order they were sent. The server will then read and write each message from the set heap stack.

You can now run the server and test if it is working. Navigate to the server directory and run cargo run.

Create a client with Rust

Let’s now create a client to send some messages to the server. To start setting up a Rust client, initialize a Rust project. To do this, navigate to the client_server_app folder and run cargo new client. This creates a client folder containing the Rust application settings. Let’s get started on some Rust code for a Rust client. Go to the client’s src folder and begin working on your main.rs file.

Add these modules to your main.rs file, as shown below.

The client needs permission to write messages and send them to the server. Therefore, we need a local host and a port number to be able to communicate with the server.

Once the client connects to the server, it needs permission that allows the sender to enter a mutable message input. The server is now supposed to print this message. These messages are read as a string, which is then converted to a utf8 buffer.

Now you just need to add buffering so that the server can read messages from the client stream.

Let’s test this out. Open a new terminal and run the client using cargo run.

Ensure your server is still up and running in a different terminal. Head over to the client terminal, start typing some messages, and click enter to send.

Head over to the server terminal, and you can see the server received the exact messages you sent.

When you connect to the network, your computer sends data to a server. The server then checks this data to make sure that it is valid. If the data is invalid, this will throw an error. In this tutorial, we have built a handy application that allows the server and client to exchange data between them using Rust programming language. I hope you found this helpful!