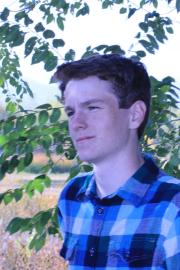 Computer vision is how computers can identify high-level information from images or videos. In this article, we will look into one of the more basic algorithms in computer vision – finding straight lines in images.

While it sounds basic, it illustrates many techniques that are used in more complicated computer vision algorithms.

Before we dive into lines, we need to first think about what steps are needed to get there. We have an image, and we want to extract information from it.

To do this, we need to first determine which aspects of the image are important, and this will depend heavily on what our end goal is. For illustrative purposes, we will be focusing the edges in a given image and will disregard other properties such as color or texture.

Step one of the line detecting process: Making an edge image

We will use a method called Canny edge detection. Without going into depth, here’s a quick summary of how it works:

Let’s see how this works using a real example. Take the following image of the section logo:

It might look like we are done and that we have found the straight lines, but that’s because the Section logo is made up of only straight lines.

So, what if instead, we look at a more complicated image? The edge images, in this case, can only take us so far in finding straight lines. 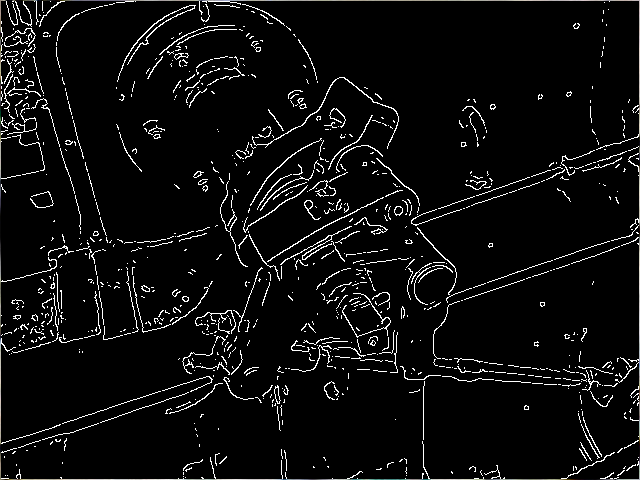 Before we start to find straight lines in the images, we will need to understand what a line is. The most common way to define a line is, of course, $y=mx+b$.

We, however, will not be using this definition. Instead, we will use what is called the Hesse normal form of a line. 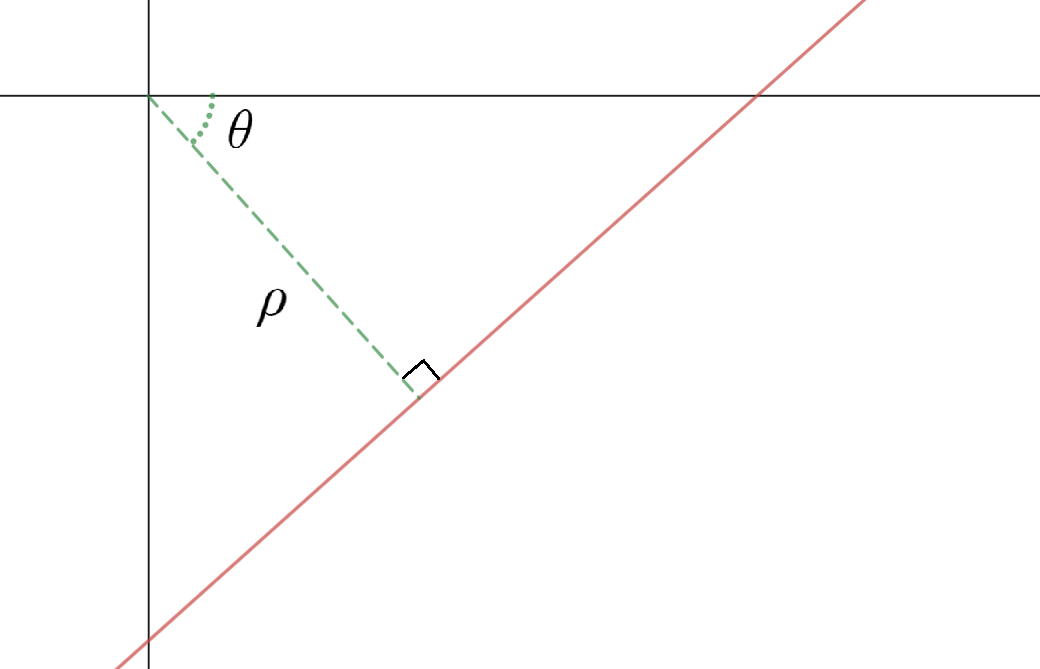 Additionally, this form gives us a lot of benefits over the slope-intercept form; namely, we can represent verticle lines (we would set $\theta = 0$). The rest of the benefits will become evident when we talk more about the Hough transform.

There are still cases where we would want to have the slope-intercept form of a line. This can easily be calculated: $m = \cot(\theta)$ and $b = -\rho \cdot \csc(\theta)$.

Let’s look at the edge image and what we can do with it. Right now, it’s just a bunch of pixels that represent edges. Each pixel can only be a 1 or a 0 (an edge or not an edge). Because our image is of a discrete size, we can think of our edge image as being a set of edge points or pixels. We will say that each of these points are in image space, a location in the image.

To determine what lines exist in our images, we will look at each edge pixel and essentially ask, what are all the possible lines this point could be in? This, in essence, is what the Hough transform is.

We made it easy for ourselves to figure out all the possible lines because we are using the Hesse normal form of a line. We can just iterate over every possible $\theta$ (with a discrete step size) and then solve for the resulting $\rho_\theta$s.

The whole process will end up looking like the following for each edge pixel. In this graph, the orange and purple points represent edges in image space.

I made this as an interactive Desmos plot here

In this image, the plot on the right is the result of the Hough transform. The plot shows Hough space with the $\rho$ values (Y-axis) vs. the $\theta$ values (X-axis).

Solving for intersections is costly and difficult. So, instead of plotting the Hough space, we will add points from the plot into “buckets”. We will define Hough space to be a matrix of buckets that represent chucks of the continuous Hough space shown in the desmos plot.

Each entry of this matrix will count the number of edges that are in the line (we’ll call these votes), and each bucket represents all lines where the $\theta$ and $\rho$ lie within the range that the bucket resides in. This means that the bucket that contains the intersection of the 4 Hough space lines in the desmos plot will have 4 votes.

This allows us to not just solve for intersections, but to also know how many points reside in any possible line. This is useful because any two points can form a line but that doesn’t mean that they really are a line in the image. That would only be the case if the number of votes a particular bucket has is above some threshold which we can set.

If we go back to our Section logo edge image and apply the Hough transform to it (or more specifically, to each edge) then we get the following result. (Note: I normalized the vote counts and applied a heat map so that the details are more visible.)

You will notice that this looks a lot like the Desmos plot, which should make sense. The main difference is that it is flipped. This is because matrices/images store the $(0,0)$ entry at the top left corner and then higher entries towards the bottom right. Therefore, while this image means the same thing as the Desmos plot, when we show it as an image, it appears flipped.

So far, we have our Hough space matrix that has peaks where the lines are. All we need to do now is extract the lines from this matrix; easier said than done.

The most accurate way to do this would be to use gradient ascent. However, for demonstrative purposes, we can just pick the spots with the most votes and filter out similar lines. Regardless, the complexity of the Hough transform is $O(n^2)$ because we have to run the Hough transform for each pixel.

Once we find a peak, which is just a $(\theta, \rho)$ point in Hough space, we can convert it into a line in image space. Then we are done; we have successfully found a line. (See below for a drawing that shows the lines found on the image.)

There is still one important thing to note about the Hough transform – it is only effective if a high number of votes fall into a small subset of bins. This means that there can not be a lot of noise in the edge image. Furthermore, the bin sizes must be properly sized depending on the accuracy/variance of the line being detected.

When we finally run the full algorithm to get out our line, we can then plot the lines on the image. If we use our Section logo limited to 16 lines we get the following:

The Section logo is made up of straight lines, so this example doesn’t show the full extent of the abilities of this technique. If we instead use a more complicated image, we will get a better understanding of how well this method works.

Take this image of cracks in ice, for example: 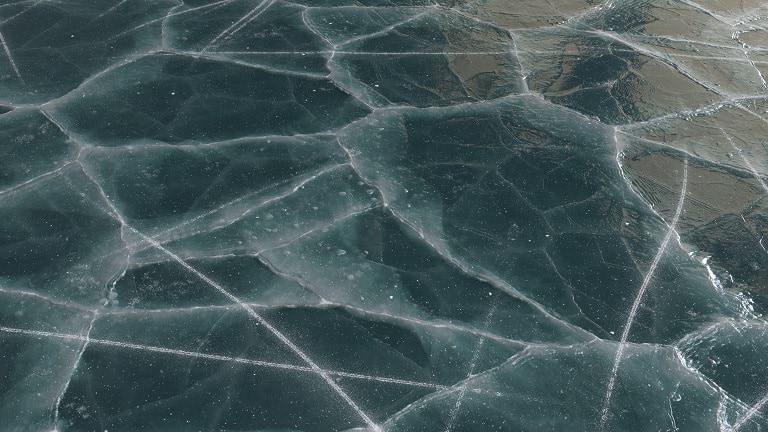 None of the edges are 100% straight, but they are straight enough that we would expect them to be detected. For the edges to be detected, we will have to lower the “accuracy” for each possible line. We can do this by making the Hough space buckets larger in the $\rho$ dimension. This allows us to still detect straight lines, but to also allow for some variance in the position of each edge within.

And with all that done, here is the resulting image with 10 lines: 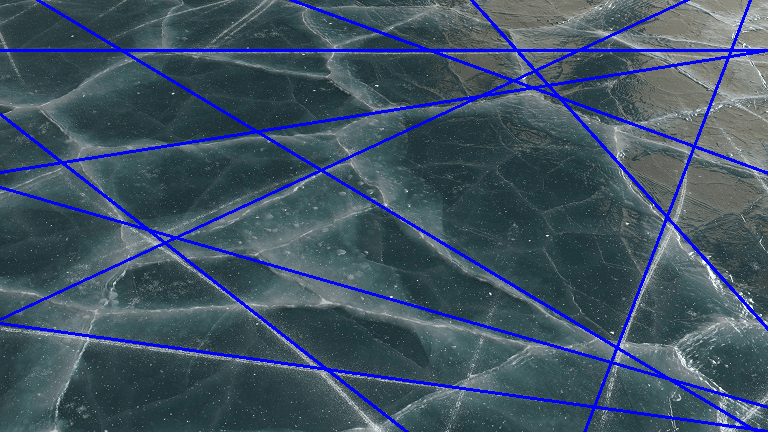 I would say that worked pretty well. You will notice how not all of the lines line up exactly with the image. This is because we decreased the line’s $\rho$ accuracy.

If you’d like to explore further, you can play around with the program I wrote in python with these and more images. All the code to make all of the images shown in this article can be found there.

In this article, we looked at the standard Hough transform, which is specialized for lines. However, the Hough transform has since been generalized for more purposes. Some good examples of this are finding circles/ellipses in images, finding any shape in images, and finding complex objects using image keywords.