A Primer on Bayesian Optimization to Optimize Hyperparameters

In the two previous optimization articles, we carried out basic experiments (these are listed below). These experiments involved building many models with varied hyperparameters. The experiments of the two methods (grid and random search) were independent of each other.

This independence has a downside. It means that we cannot use information from one experiment to improve another. However, there is a more intuitive method of hyperparameter optimization.

Before reading any further, I recommend some basic understanding of Baye’s Theorem.

I also encourage you to have read up on grid and random search. This will offer a more intuitive understanding of optimization as a whole. 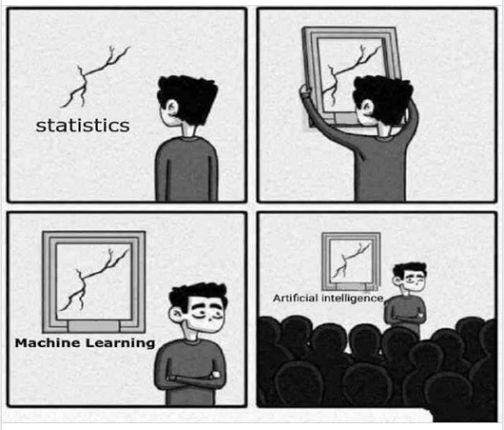 Bayesian statistics refers to a branch of Statistics that applies probabilities to problems. It gives tools that assist in understanding the probability of an event occurring in the evidence of new data. We can say it assists people to upgrade their beliefs with the provision of new data.

For example, Don and Frank have both scored goals in their previous five soccer matches. Don scored four goals, while Frank scored two in five games. If you were to bank on one of the two to score in their next match, you would probably choose Don, right?

But what if we told you that half of Don’s goals came against lower-tier opposition? And that in the games Frank failed to score, his team had a man less due to being sent off?

Plus, in the games that Frank scored, he came on as a substitute for 15 minutes each game? In light of this new information, who would you put your money on?

This twist shows us that Frank’s chances of scoring in the next game he starts have increased considerably. From the example, we have used the concept of probability on a basic statistical problem. This defines Bayesian statistics.

We call it the surrogate function. It is the true objective function represented in terms of probability. This is as a result of previously-evaluated selected hyperparameters. We shall discuss this function further in the next section.

To carry out Bayesian optimization for hyperparameter search, we follow the steps below:

We will go through the mentioned steps in detail during an in-depth tutorial in the future. For now, our scope is on the basics of Bayesian optimization.

An example would be the Gaussian process.

This process refers to a set of infinite Gaussian functions. These gaussian functions provide flexibility as well as a vast function collection. This allows for the creation of the surrogate function over the domains of the true objective function.

The prior assumes that similar inputs produce similar outputs. There are scenarios where we lack knowledge about priors for hyperparameter search. The previously described prior is useful in such situations. A Gaussian process predicts a Gaussian distribution for approximated values. This is instead of predicting a single value.

We can derive certain functions from the surrogate function. These functions guide the choice of the next evaluation points. We call them acquisition functions.

Let’s define an acquisition function using the expected improvement method. The hyperparameter set that generates the best model performance will always be tracked. A new set of hyperparameters may provide an improvement after subsequent experiments. A new set may lead to stagnation as well.

Let’s represent the expected improvement of a point $x$ mathematically.

Where $y_{max}$ represents $max_iy_i$, which is the best value of the function $f$ and EV represents expected value. It is worth noting that this formula is only valid when there are exact samples of the function values $$ y_i = f(x_i) $$. 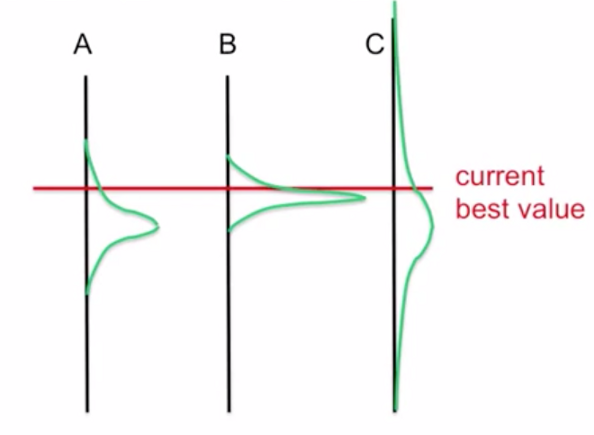 Expected improvement seeks the greatest first moment of the area of the Gaussian graph above the current best value. In this case, this is represented by distribution C.

This implies that the greatest chance of getting better hyperparameter settings is from C. A offers the worst settings.

Bayesian optimization is quite efficient. It carries out hyperparameter selection in a very informed manner. Priority is given to hyperparameters that show more promise based on previous results.

This makes Bayesian optimization more efficient than both grid and random search. We can find the best set in a shorter time. I hope the trilogy of optimization articles has simplified these concepts for you.

Until next time, happy reading!