Back in February, Google announced an update that takes page load times into consideration as one of its signals in Google’s mobile search rankings. The change, which Google is calling the “Speed Update” began in March and will go into effect across July.

While factors like the relevance of content will still be considered, very slow websites on mobile devices will begin to rank lower in Google’s search results. It’s important to be prepared for these changes by optimizing your site content now.

In its original announcement, Google emphasized how important page speed and optimized content is to good business, writing, “If there’s too much friction, they’ll [visitors] abandon the site and move on”. In a set of studies run in collaboration with SOASTA Research last year that focused on ‘The State of Online Retail Performance’, Google found that 53% of mobile site visitors will leave a page that takes over three seconds to load.

On average, mobile conversion rates are lower than desktop (even though over half of web traffic comes from mobile traffic). Google linked this to the fact that the average landing page on mobile devices takes 15 seconds to load. “In short, speed equals revenue”, Google cautioned.

Their research found that the automotive, retail and technology sectors had the slowest loading pages. Loading a web page is more resource intensive than ever across all industries, however. Google/SOASTA noted that 70% of all the mobile landing pages they analyzed took over five seconds for the visual content above the fold to display on the screen, and it took over seven seconds for visual content both above and below the fold to fully load.

The other major piece of analysis, stemming from a 90% accurate deep neural network the research team trained to model the human brain and nervous system, led to the prediction that as page load time moves from one to ten seconds, the likelihood of a mobile site visitor bouncing goes up by 123%. Likewise, as the total number of elements on a page rises – specifically from 400 to 6,000, the likelihood of conversion decreases by 95%.

Getting Up to Speed

Digital marketing expert Jim Stewart told Internetretailing.com recently that businesses have limited time to get their websites up to speed before they see their Google rankings drop. “It’s all about user experience. You’ve got a week to go through and check your mobile site”, Stewart warned, “make sure it’s as fast as possible – because this is a speed update.”

The need to prioritize speed is particularly important for less well-known brands (brands with high relevance, but slow load speeds will still rank highly) and those with mobile-first websites (as Google will deploy mobile-first indexing if a site primarily has mobile users).

Irrespective of the Google Update, increased mobile performance drives conversion rates, which equals increased revenue; hence there is really no time like the present to seek out performance optimization tools and techniques. Performance Optimization Tools Available at Section

There are multiple actions that developers can take to prioritize and increase the speed of mobile sites. Features that are key to bettering site speed include HTML dynamic caching, static content optimization and front end optimization, all of which we offer at Section through our modular Edge Compute Platform.

HTML dynamic caching is a highly beneficial technology for making websites faster. When dynamic caching is utilized for the entire HTML document, both back end load time and Time to First Byte (TTFB) are dramatically improved. However, dynamic caching is not commonly deployed. Many websites don’t do it either because they cannot obtain visibility of the HTML document performance or because of the risk of caching dynamic content without being able to test cache configuration before going live. At Section, we provide code-level configuration and a local development environment for testing. Section offers developers full control over the ways in which you can cache dynamic content and the option to instantly clear cache once changes have been applied.

We also offer static caching for both objects and images - this can significantly reduce page load speeds, specifically by serving static objects directly from the cache back to the request instead of retrieving them from your web server, thereby reducing overhead.

Another of our offerings is Google’s PageSpeed for front-end optimization. The majority of websites spend 80% or more of their load time on front end elements. PageSpeed improves web page latency by implementing best practices for front end optimizations into one tool using a set of configurable filters. The filters improve performance in a number of ways, including via optimizing caching (via local storage cache or outlining JavaScript, for instance), minimizing round trip times and reducing the payload size.

We also offer Varnish Cache (3, 4, 5 or 6), a reverse proxy that deploys rules you can determine in VCL (Varnish Configuration Language) to accelerate websites and applications by overseeing HTTP requests to cache objects or redirect users.

For sites looking for detailed information on measuring and improving website performance, we also have an eBook available to download for free: 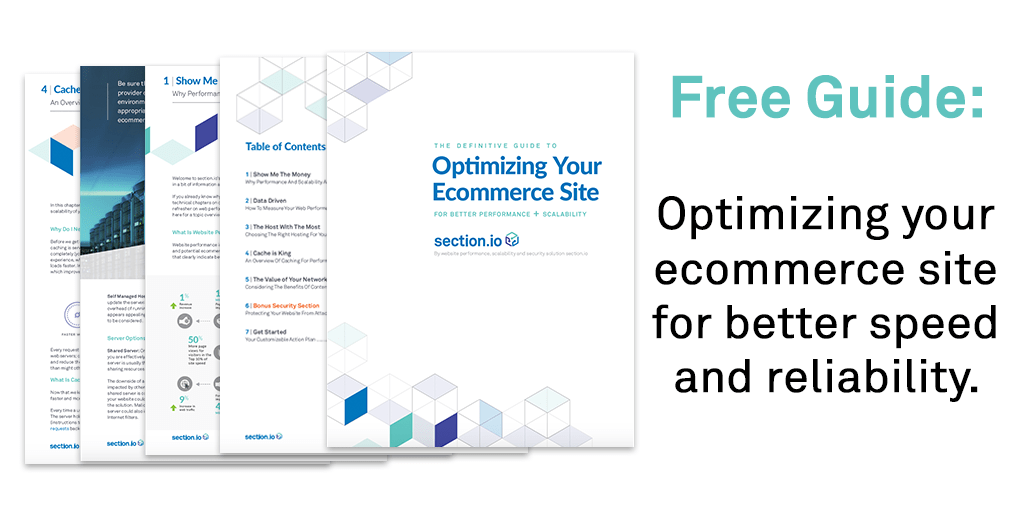