Why is Docker so Popular

Docker is an open-source container technology used by developers and system admins to build, ship, and run distributed applications. Docker has been a game-changer since its release in 2013.

It has become a massively popular containerization technology. In this article, we will discuss why Docker is a big deal.

Before the arrival of Docker, developers used virtualization technology to develop applications, which worked fine in their own environment. The problem was when the same application reached production; it wouldnt work correctly due to the difference in the computing environments. This technology didn’t support microservices architecture. For example, large applications couldn’t be broken down into small services.

With the introduction of Docker, a developer can build and deploy an application in containerized environments. This ensures that applications run the same regardless of where they are or what computer or environment they are in. Docker containers, in essence, can be deployed to any computer, infrastructure, or cloud with no compatibility problems.

These containers act like microcomputers with specific jobs, each with its own operating system and its own isolated CPUs, memory, and network resources.

This was a massive step for the microservices architecture. Unlike the virtual machine, a Docker container does not require you to pre-allocate resources. A container takes the resources according to the need of the application. Thus achieving optimal utilization of the available computing resources.

The popularity of Docker

Since the introduction of Docker and Docker containers, the growth has been relatively tremendous. Let’s check some metrics that show how Docker trends its popularity among developers.

Every year, stack overflow releases survey results of how developers cope with different technologies in the world of computing. Let’s check at the 2020 survey which included 65000 respondents.

The survey shows that Windows and Linux are the most popular platforms. Notably, there was an immense growth of container technologies such as Docker and Kubernetes.

Docker was the third most popular platform and correlated technologies. About 35% of the respondent uses Docker. 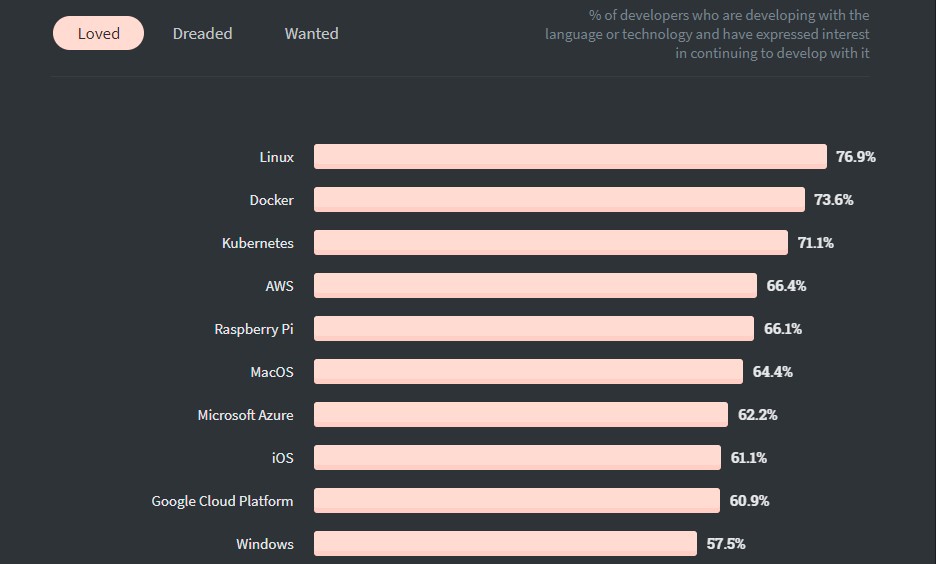 It also appeared that Docker is the most wanted technology, and most developers want to learn more about it.

This metrics are a testimonial that Docker is widespread, and the popularity is growing rapidly.

Reasons why is Docker so popular

Why does everyone loves and seems to be interested in Docker?

Docker allows you to break down your application into smaller services. Each service is like a microcomputer. Each with a specific function and can be isolated from other services.

The advantages of this are:

In short, a service can be easily added, removed, stopped, and restarted without affecting others on the same host machine.

Docker containers, unlike virtual machines, can be distributed on any platform without causing compatibility issues. Your application will remain system agnostic, making it easier to use, build, manage, and deploy to any host system or cloud.

Docker is a form of virtualization in which (unlike virtual machines) the resources are allocated directly by the host. This helps you to run many Docker containers instead of only a few virtual machines. Each container self assigns resources on the need of the application.

Docker uses a layered file system. This gives Docker the ability to use less disk space as it can reuse files efficiently. For example, if you have multiple Docker images using the same base image, Docker will only keep a single copy of the files needed and share them with each container. This creates vast economies of scale, making your application cost-effective.

Let’s take the case of virtual machines. Where you have a single server, and you want to run multiple services. Imagine that every application will need its own operating system. Basically, you are running multiple operating systems on the same physical hardware. This way, you’re wasting resources such as CPU, RAM, and hard drive.

Usually, when creating an application, you would install many programs and tools onto your application’s server. The whole application is tied to the machine where this server is. Sharing such applications can be tricky. With Docker, you can take the entire application and contain it in a container.

You write instructions indicating how to set up a server just the way you need it to work. You set every technology stack that your application requires to run in a single configuration file. You can redeploy these configurations on any other server and duplicate the application functionality.

This affects the compatibility as well. Let’s say you have Node.js version 5.0.0, and I have the Node.js version 16.0.0. When running this application on these two platforms, something might be affected in terms of version compatibility. With Docker, you set all these version configurations to get your application to work. , if it works on my side, it will work for you or anybody else.

On the other side, this approach encourages CI/CD. This is a DevOps methodology designed to encourage developers to share code repositories on time and more generally with other developers. Developers can then deploy, test, operate, and monitor application code fast and efficiently.

Containerization technologies are here to stay. It is the right way to package your application and move it around your infrastructure. Many developers and companies are adopting these approaches, with Docker leading the way.

Some of the big companies that use Docker include PayPal, Uber, eBay, Shopify, Spotify, Quora, etc.

Docker is revolutionizing the IT world across the board. It is speeding up development, testing, and server deployments. If you haven’t learned Docker, check it and see how you can use it to containerize your next project.