How many words is an image worth? This paper, recently published by Google’s research team, tells us that an image is worth 16 x 16 words. Let me explain what they meant by this to help you better understand.

To understand this article’s content, a reader ought to have a basic understanding about Natural Language Processing (NLP) and Convolution Neural Networks (CNNs).

Transformers were proposed in this paper for machine translation but have since become the main architecture in solving NLP tasks such as speech recognition and text summarization. They are behind the recent developments in NLP, including OpenAI’s GPT-3 and Google’s BERT.

These image patches are viewed in the same way as words (tokens) in the NLP context. Hence, the relation between viewing the 16 x 16 input images as 16 x 16 words.

An overview of the model 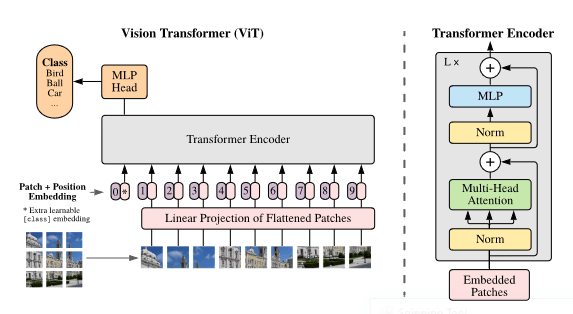 The model’s first step is to divide an input image into a sequence of image patches. The paper divided the images into 16 x 16 dimensions, hence the paper’s title.

These image patches are then passed through a trainable linear projection layer. This layer plays the role of an embedding layer and outputs fixed size vectors.

An important feature to note in the position embedding module is the 0th class. This idea of the 0th class is borrowed from BERT’s class token. Like the other classes, this class is also learned, but it doesn’t come from its image. Instead, it is hardcoded in the model architecture.

The idea behind how position embedding works is demonstrated in the image below:

If we do not provide the transformer with the positional information, it will have no idea of the images’ sequence (which comes first and the images that follow it). This sequence of vector images is then fed into the transformer encoder.

The Multi-Head Attention layer split inputs into several heads so that each head can learn different levels of self-attention. The outputs of all the heads are then concatenated and passed through the Multi-Layer Perceptron.

It is also important to note that transformers apply normalization layers (Layer Norm) before every block and residual block right after.

Finally, an extra learnable classification module (the MLP Head) is added to the transformer encoder, giving the network’s output classes.

When the ViT model is pre-trained on the ImageNet-21k dataset and the JFT-300M dataset, the model trumps the best models on many image recognition benchmarks.

The size of the dataset seems to play a major role in the vision transformer model. Since transformers lack inherent biases present in CNNs, i.e., locality, equivariance, and translation, they tend to generalize poorly on mid-sized datasets such as ImageNet.

But, when trained on the ImageNet-21 and JFT-300M (Google’s in-house dataset), which are larger datasets with about 14M-300M images, it was found that inductive bias was outperformed. They also found the accuracy to increase with the larger datasets.

These results are shown below:

This is because they are all four-legged animals. Thus, the knowledge that classes the cats and dogs should also be similar to that which classes horses and cows.

When evaluated on the Visual Task Adaptation Benchmark (VTAB), the visual transformer model was found to outperform previous models on the natural, specialized, and structured task groups.

They used Attention Rollout proposed in this paper to compute attention maps from output words to input spaces.

The results from their experiments are shown below:

Summary of the Model

In this article, we have explored how transformers are directly applied to image recognition. This is a shift from previous architectures that proposed using attention with CNNs or changing modules in CNNs. We have seen that no inductive biases, such as localization and equivariance, are introduced into the architecture.

Instead, only a standard transformer encoder is used. The only trick they used was to transform an input image into a sequence of 16 x 16 image patches. It is a simple, scalable architecture, and outperforms state-of-the-art architectures, especially when trained on large datasets such as the JFT-300M dataset. It’s also relatively cheap to pre-train the model.

Transformers completely replaced Long Short-Term Memory (LSTM) in NLP. Now, they aim to replace Convolutional Neural Networks (CNNs). It is a promising model that might make CNN’s extinct in the future, but not yet. It is still challenging for the model to perform other computer vision tasks, such as image segmentation and detection.