Variables are a way for programmers to name a value in order to reuse it, update it, or keep track of it. In this article, we will go through naming variables, declaring variables, and initializing variables. We will also learn about the different scopes of variables to ensure that we completely understand them.

To follow along with this tutorial, you need a web browser. You can get Google Chrome (one of the most popular) here.

We will use the JavaScript console to execute JavaScript code in this tutorial. To open it in Google Chrome, press CTRL + Shift + J on Windows and Linux or CMD + Option + J on Mac OS.

Understanding the scope of variables

Scope determines the accessibility of variables from different parts of your code.

JavaScript has two types of scopes:

In JavaScript, a block is denoted by curly braces. The space between the curly brackets is known as a block. For example, the if...else, do...while and for loop statements create blocks.

When variables are declared within a function or a block, they are locally scoped. It means that they can only be accessed inside the function or the block they were declared in.

Local scope variables are divided into:

Before you start declaring variables, you should learn how to name them. Below are some of the rules that you should follow. Failing to follow these rules will cause an error.

Variables can be declared using the var keyword as shown below:

Upon declaring a variable, you can assign a value to the variable such as a string or a number.

Declaring and initializing a variable at the same time is also possible using the following syntax.

Declaring two or more variables in a single statement is also possible. Each declaration is separated by a comma (,).

If you use var inside a block, the variable will not be a block scoped. It will either be function scoped or globally scoped depending upon where the block is present.

The main difference between keywords var and let is that variables declared using let are block-scoped, while var is function scoped.

In the example above, the exe variable only exists inside the block, and referencing it outside the block will cause an error Uncaught ReferenceError: exe is not defined.

A variable declared using the keyword const must be initialized immediately with a value, and that value can’t be redeclared. In other words, using the const keyword lets you declare constants that cannot be changed later once you’ve declared them.

The error: Uncaught TypeError: Assignment to constant variable, informs you that you can’t change the value of pi.

In summary, we have learned about variables and how they are declared and used in JavaScript and have gone through different types of variable scopes. I hope you find this guide to JavaScript variables useful. 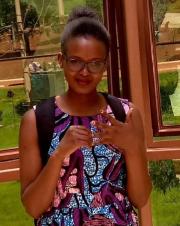 Caroline is an undergraduate student pursuing a degree in Computer Science. She takes particular interest in full-stack web development. When not hiding in a corner coding, she attends karate classes.