Developing brain-computer interfaces (BCI) that can decode and translate brain signals will depend on us being able to decode more of these signals in a way that is useful for people such as those with paralysis.

Can we use the brain’s neural activities from people imagining handwriting to decode letters, words, and even sentences?

In this paper published in the Nature journal by researchers from Stanford, they were interested in investigating whether complex gestures and motor functions such as handwriting can be decoded from our neural activities.

Complex human movements such as handwriting have over the years been a hard task to solve. This is because pulling information from these complex neural brain data isn’t easy. But, they were able to solve this problem using machine learning. It decoded these complex neural signals and converted them into texts and words.

Before we dive in, it is crucial to understand these three terminologies:

It is a dimensionality reduction technique that computes principal components by reducing the dimensions of large datasets into smaller ones.

Though reduced into smaller sets (principal components), these data should still contain most of the important information from the larger dataset. This process is performed on data as it is hard to compute datasets with large dimensions. Read more on it here.

It is a computer-based system that recognizes the intent of a user through the use of brain signals. It decodes the brain’s neural activities and translates them into outputs that replace, restore, enhance, or improve human functions. Read more on it here.

Now that we understand these terminologies, let’s get started!

Recently, there has been a lot of interest in researching how our brains represent the things that we perform in our lives, i.e., walking, speaking, and writing.

Developing brain-computer interfaces (BCI) that can decode and translate brain signals will depend on us being able to decode more of these signals in a way that is useful for people such as those with paralysis. If you’d like to see more of these researches, check out Braingate. It is a research company that focuses on developing BCI technologies to restore mobility and communication.

In this article, we will explore how machine learning is used to decode and translate brain neural signals into handwritten texts. Indeed, it is a first of its kind.

Previous BCI research has focused on restoring motor skills such as reading and grasping. Not much focus has been put in researching the use of BCI to solve complex behavioral tasks. This article aims to tackle that.

The researchers in this study worked with a paralysis patient with a spinal cord injury. He was paralyzed from the neck downwards, including not being able to move his hands. The goal was to make the patient imagine writing with a pen on a piece of paper as if his hands weren’t paralyzed. Write

The figure shows two tiny arrays of implanted electrodes relaying information from the brain of the patient. It controls the hands and arms to an algorithm. The algorithm then translates these signals into letters that appear on a screen.

Let’s try and understand how they do this.

To visualize the neural activities recorded during the attempted writing from the patient’s brain, two machine learning techniques were used.

These techniques are essential, as neural signals are too complex with a lot of dimensions. These signals also contain unnecessary background noise which we may not require in our task. These two techniques are used to visualize and reduce the complex dimensions of the signal enabling us to achieve only the required ones. 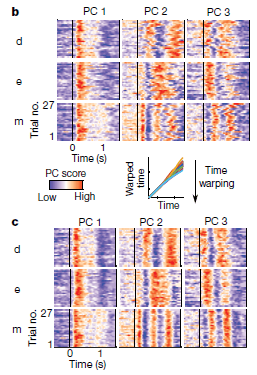 The above example shows the neural activity in the top 3 principal components for three example letters (d, e, and m). 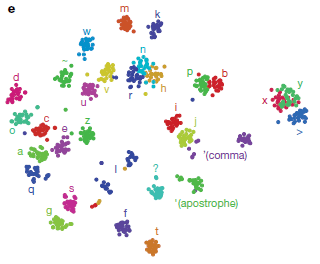 The figure represents the 2D visualization of the neural activity made using t-SNE.

Now that they were successful in representing neural activities in their respective letters, the researchers faced a new challenge. Could they replicate the same success in decoding entire handwritten sentences instead of only letters in real-time?

Let’s see how they went about with this.

They achieved this by using a Recurrent Neural Network (RNN). You can read more about RNNs here.

The RNN is trained to convert the brain’s neural activity data into probabilities. These probabilities describe the likelihood of each character being written within a certain window of time. It assigns the probability of that data being associated with any particular character or sign based on the embedding that we explained earlier.

They performed this in two different ways. Using an online and offline system. 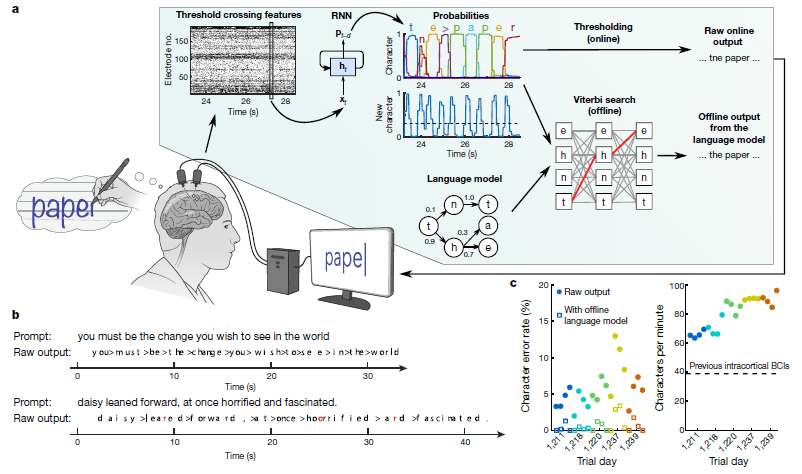 In the online system, they used a threshold system. If the probability of a certain set of data with letters was high enough, then it would be assigned that letter. The assigned letters would then be used in the sentence.

In the offline system, they used a large-vocabulary language model to simulate an auto-correct feature. It fixed errors by predicting the probability that a letter came next in a sequence of letters.

This research shows results for 5 days from one study participant who already had a system implanted in his brain. 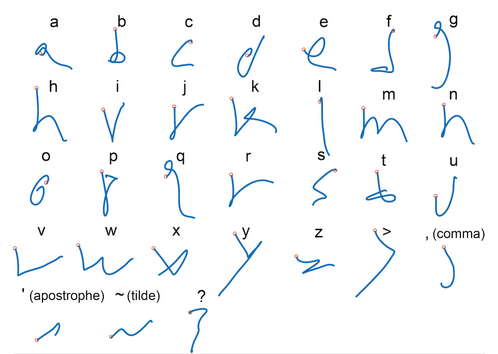 You can find the full code for the paper on GitHub.

I’d like to point out that this isn’t something that will be available to the general public. This is because such a procedure would need implanting electrodes into people’s brains.

It is still in the experimental phase. Only one patient was used to get these results. More tests still need to be done on more patients to see how well this novel system generalizes.

But the findings obtained from this experiment show huge promise and would have a lot of impactful real-world uses. Their biggest hope is that their invention will one day help people with complications such as paralysis. This would enable patients to communicate, both faster and better. It would also offer them inclusion in the usage of impactful technology, whose purpose is to make lives better.

If you’re interested in learning more about similar projects, Braingate is a good place to start.