Kelvin Munene is an undergraduate student undertaking his Bachelors of science in Computer Science. He is interested in cyber security and ethics. He likes playing games as well.

Shared memory helps programs communicate faster. Programs may use one or more processors and as a result, a process may have several threads.

Threading is a process that achieves parallelism. Parallelism is the simultaneous execution of many processes.

Browser tabs are threads. The same threading technology is used in Microsoft Word. This article will discuss how to use Pthreads and OpenMP in parallel programming.

To follow along with this tutorial, you will need to:

Systems may have single-core or multi core CPUs. A multi-core CPU processes one thread per core, the memory area where several threads execute. They use free-access memory to build it. As much as the threads are separate, they share a memory space.

Shared memory does not allocate data. Also, changes to one thread affects all others in the shared memory. As an alternative, jobs in a memory passing paradigm share a single address space, which they read and write in separate threads.

An overview of shared memory process and threads

Multiple applications may access shared memory at the same time. This is possible through the use of shared memory. This helps processes to interact without contacting the kernel.

often, An operating system does not enable one process to access another’s memory. If two processes use shared memory, the constraint must be lifted.

A process is a unit of work in a system. For example, text files are used to develop computer programs, which run as processes. After loading, the program may be divided into stack, heap, text, and data portions.

A thread is a single instance of a sequential computer program that may be implemented at the user or kernel level. However, the thread management kernel is unaware of user-level threads.

Threads are controlled and supported natively by the operating system in the kernel. There is no thread management code in the program. Any application has the potential to be multithreaded. A single process may be responsible for managing the threads of an application.

The Shmctl command is used in shared memory management and distribution. The command returns and modifies information about a shared memory area.

To begin, we need to know the identity of the shared memory section. A struct shmid_ds and the second parameter, IPC_STAT, are required to get information about a shared memory segment.

To delete a segment, we supply IPC RMID as the second parameter and NULL as the third parameter. Segment removal occurs after all processes that were previously connected have been deleted.

The program below illustrates the management and redistribution of shared memory:

The ipcs command offers information about shared segments and interprocess communication. We get shared memory info with the ipcs -m command. This code uses one shared memory segment (1627649).

The output of the ipcs -m command will be:

If a program leaves this memory segment behind, you may delete it using the ipcrm command shown below. The integers in the code represent the memory segment to be removed.

Pthreads and their use

Any programming language may utilize Pthreads, which stands for POSIX Threads. Pthreads enable a computer to do several tasks at once.

The POSIX Threads API creates, manages threads, and introduces a new process flow. The process flow may be scheduled to operate on another CPU, increasing speed.

To understand pthreads, let us first know how to create threads.

To develop a thread, we use the following function:

pthread_create creates a new thread. The new thread starts by executing start routine() with arg as the only parameter.

To close a thread, we use the following function:

Here is a C++ application that illustrates the two actions:

To run the code above in the UNIX system, run the command below:

GCC is the software used to run the C++ code in Linux systems. The -lpthred command tells the compiler that the compiled file is a pthread program. The -o specifies the output of the compiled program.

After the code is compiled, an output file is created and saved in the same terminal directory. For our case, the output file will be saved as output1 as we specified in the command.

To view the output, run the command below:

The screenshot below shows all the processes involved: 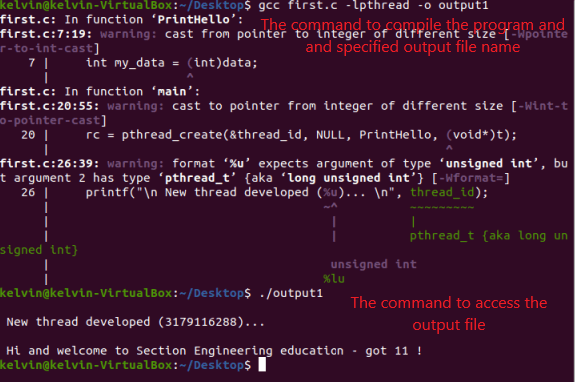 A thread terminates by using pthread_exit or returning from its thread function. However, a thread may seek the termination of another. This is called canceling a thread.

You may cancel a thread by passing it its ID. A canceled thread may be restarted to free up resources.

A thread may be generated as a joinable (default) or detached (optional) thread. A joinable thread is not automatically cleaned away by GNU/Linux as a process.

Instead, the thread’s exit state is stored until another thread performs pthread_join to retrieve it. Afterward, its resources are freed.

A detachable thread cleans up automatically. Detaching a thread prevents another thread from synchronizing or getting its return value through pthread_join.

In certain cases, a thread is all or nothing. An allocated thread may use and release resources. Resources may leak if the thread dies during this function. Allowing a thread to select when and if a task is canceled may help.

There are three methods to cancel a thread:

Asynchronous thread cancellation is possible. The thread may be ended, but not at random.

Cancellation requests may only be canceled at certain stages. Threads that are asynchronously cancellable can be interrupted at any moment.

Asynchronously cancellable threads, on the other hand, may be canceled only at specified times. The thread will wait for cancellation requests.

Asynchronous threads use pthread_setcanceltype to cancel a thread. However, the method’s thread may have issues. The best option should be to usePTHREAD_CANCEL_ASYNCHRONOUS to cancel the thread asynchronously. This variable stores the thread’s previous cancellation type.

The pthread_setcancelstate function prevents a thread from canceling. Like pthread setcanceltype, it affects the thread that invokes it.

Let us look at an example program that protects an ATM transaction with a critical section:

The program above restricts the ATM payment if the initial balance is less than off_account to be used.

After the crucial section, the prior cancel status must be restored rather than being changed to PTHREAD_CANCEL_ENABLE. This approach allows you to securely call the process transaction function from another section. In such a case, your function will be canceled.

Pthreads are useful in the following ways:

OpenMP and its use

OpenMP is an SMP programming package. OpenMP threads share memory and data. This includes C++ and FORTRAN. The OpenMP header file is omp.h.

An OpenMP application’s parts might be sequential or parallel. For example, an OpenMP program often begins with a sequential selection that sets up the environment and initializes the variables.

When an OpenMP application is launched, it will use one thread (in the sequential portions) and numerous threads (in the parallel sections).

The primary thread is the thread that travels from the start to the end. On the other hand, the secondary threads will fork due to the parallel parts of the program.

A particular directive marks a block of code executed in a parallel program. This directive will induce secondary threads to arise when the execution reaches a parallel portion (indicated by omp pragma).

Each thread runs a similar piece of code. It joins the master when finished. When all threads have been terminated, the master resumes programming in the parallel part.

We use OpenMP directives to:

Here is the code to create a thread using OpenMP:

After this line, the main thread forks multiple instances to do the #pragma construct’s task. The main thread’s ID will be 0.

Let us look at the example code. First, save it as second.c.

To compile the code above, run the command gcc -fopenmp second.c -o second and view the output using ./second.

OOpenMP takes care of parallelizing loops with only a few parameters and a loop definition. The directive, work-sharing concept, must be in a parallel section.

The #pragma omp command distributes the loop across threads. It must be used with another block of code.

Let us look at an example program that adds all elements in an array. Save the code as third.c:

From the article above, we have learned multithreading and its implementation using the OpenMP and pthreads. We also learned how to use the Linux terminal to run C and C++ programs.

Use the knowledge gained from this article to understand more about Linux systems.