Pattern recognition is the use of computer algorithms to recognize data regularities and patterns. This type of recognition can be done on various input types, such as biometric recognition, colors, image recognition, and facial recognition. It has been applied in various fields such as image analysis, computer vision, healthcare, and seismic analysis.

This article will take readers through pattern recognition in machine learning and explains how it works. It also discusses how it has been applied in various fields and analyzes its future outlook.

What is pattern recognition?

Pattern recognition is the use of machine learning algorithms to identify patterns. It classifies data based on statistical information or knowledge gained from patterns and their representation.

In this technique, labeled training data is used to train pattern recognition systems. A label is attached to a specific input value that is used to produce a pattern-based output. In the absence of labeled data, other computer algorithms may be employed to find unknown patterns.

Pattern recognition has the following features:

The following image shows how data is used for training and testing.

The training set contains images or data used for training or building the model. Training rules are used to provide the criteria for output decisions.

Training algorithms are used to match a given input data with a corresponding output decision. The algorithms and rules are then applied to facilitate training. The system uses the information collected from the data to generate results.

The testing set is used to validate the accuracy of the system. The testing data is used to check whether the accurate output is attained after the system has been trained. This data represents approximately 20% of the entire data in the pattern recognition system.

The pattern recognition process works in five main phases as shown in the image below: 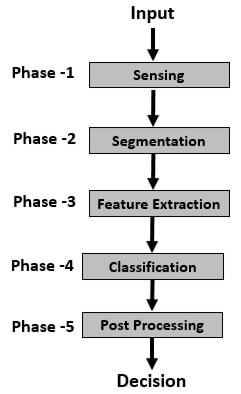 These phases can be explained as follows:

1. Sensing: In this phase, the pattern recognition system converts the input data into analogous data.

2. Segmentation: This phase ensures that the sensed objects are isolated.

3. Feature extraction: This phase computes the features or properties of the objects and sends them for further classification.

4. Classification: In this phase, the sensed objects are categorized or placed in groups or cases.

5. Post-processing: Here, further considerations are made before a decision is made.

The following are some of the algorithms used in pattern recognition.

This algorithm is used to build a statistical model. This is a model whose patterns are described using features. The model can predict the probabilistic nature of patterns. The chosen features are used to form clusters. The probability distribution of the pattern is analyzed and the system adapts accordingly. The patterns are subjected to further processing. The model then applies testing patterns to identify patterns.

These algorithms are effective when the pattern recognition process is complex. They are important when multi-dimensional entities are used. Patterns are classified into subclasses, thus forming a hierarchical structure. The structural model defines the relationship between elements in the system.

These algorithms are used to build a template matching model, which is a simple pattern recognition model. The model uses two images to establish similarity and the matched pattern is stored in the form of templates. The disadvantage of this model is that it is not efficient in the recognition of distorted patterns.

Fuzzy-based algorithms apply the concept of fuzzy logic, which utilizes truth values between 0 and 1. In a fuzzy model, some rules may be applied to match a given input with the corresponding output. This model produces good results because it is suited for uncertain domains.

Hybrid algorithms are used to build a hybrid model, which uses multiple classifiers to recognize patterns. Every specific classifier undergoes training based on feature spaces. A set of combiners and classifiers are used to derive the conclusion. A decision function is used to decide the accuracy of classifiers.

Pattern recognition can be applied in the following areas:

The future of pattern recognition

Pattern recognition is an important technique that enhances the recognition of data regularities and patterns. The number of applications employing this process has grown tremendously over the recent years. These applications have solved various real-life challenges through the use of training data, testing data, and classifiers.

Pattern recognition has the potential to evolve into a more intelligent process that supports various digital technologies. This technique can be a source of advancements in robotics and automation, especially in the improvement of how humanoid robots are trained. 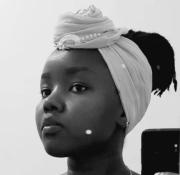 Ann Waweru is a computer science and engineering student at the University of Electronic Science and Technology of China (UESTC), Sichuan Province, China. She is a full-stack web developer and an aspiring data scientist. She also has a passion for Artificial Intelligence and Machine Learning. Her hobbies are playing badminton, hiking, and traveling.