Ian Jorquera is an undergraduate student at the University of Colorado Boulder pursuing a degree in Computer Science. Ian is particularly interested in mathematics and algorithms. In his free time, Ian enjoys skiing and whitewater kayaking.

An Introduction to Error-Correcting Codes - Part 1

The spacecraft Juno has taken countless pictures of chaotic storms on Jupiter, all in stunning detail. But how are these images transmitted hundreds of millions of miles through space, with almost no signs of interference? You might also wonder how DVDs can still play movies with scratches on them.

One of the most common uses of the Hamming code is error-correcting memory. A computer uses dynamic random-access memory, or RAM, to speed up the time it takes to run all your programs. This type of memory stores data in tiny capacitors. Electrical or magnetic interference can cause spontaneous bit-flips in these capacitors, resulting in error. This interference is rare but can cause undesirable consequences. Computers use specialized hardware controllers to correct these errors, which traditionally use the Hamming code.

What are error-correcting codes?

First, let’s define what an error is. For a string of bits, an error is merely a bit-flip. For example, we might have a string of bits 01101. An error in the fourth bit would cause the 0 to become a 1, resulting in the new message 01111. Our goal with error-correcting codes is to locate these errors and correct them.

At its core, error-correcting codes allow for the detection and correction of errors in any form of data. This is achieved by taking a string of symbols, most commonly a string of bits, as the input. We will add additional bits called parity bits. These can help determine if an error might have occurred.

The most classic example of error-correction is the repetition code, where for each bit in an input message, we duplicate each bit multiple times. For example, if you had the message 01101 we could encode it using this repetition method and it would become 000 111 111 000 111. In this case, we repeated each bit three times. If a random bit flip or error occurred, we could correct it by simply taking the most common bit of each three-bit segments.

Let’s say we received the following message 100 111 101 000 110, which includes multiple errors. We would then be able to correct the error and decode the message to the original message 01101. But this method isn’t very efficient as we had to make our message three times longer, adding two parity bits for each bit of the original code. Additionally, it’s important to note that if more than one bit in these three-bit segment was affected by an error we could no longer correct the error.

How can we improve the repetition code? Instead of duplicating each bit to create the parity bits, let’s make our parity bits dependent on multiple bits from the input. For example, consider the two-bit message 11. We could add a parity bit by using the XOR operator to combine the original bits, $1 \oplus 1 = 0$.

Now by adding this parity bit, we have the new encoded message 110. To check if an error occurred in any of the three bits, we can recalculate this parity bit and determine if the received bit matched what we calculated. If they don’t, we will say the parity bit is incorrect. Let’s say the original message 110 had an error in the second bit resulting in the received message being 100. If we try to recalculate the parity, we find it no longer matches the received parity bit, so it’s incorrect. So we know there must be an error. We can’t correct the error in this case but detecting that an error occurred is a good start.

The problem with the previous example is we have no way of actually correcting the error. The reason for this can be visualized in the graph below, where all possible combinations of three bits will be represented by a node. The valid codewords, those whose parity bits are correct, are bold. Each edge will then represent a bit flip corresponding to the connected nodes. 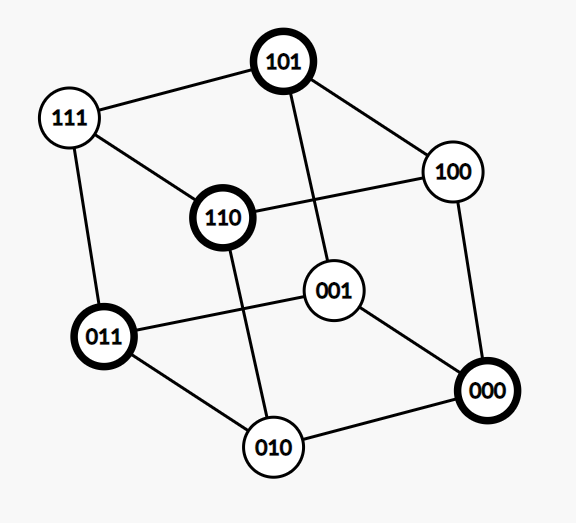 For example, 110 and 000 have a Hamming distance of two. Starting at an invalid code, one with an error, we can see we have no way to determine which of the valid codes was sent. As three valid codes are all a distance of one from the invalid code. This indicates that there would be three equally likely possibilities.

Consider again the received message 100, which has an error in the second bit. We can not accurately correct it as it is equally likely that the error happened in any of the three bits. The valid code words 110, 000, and 101 are all a Hamming distance of one away. 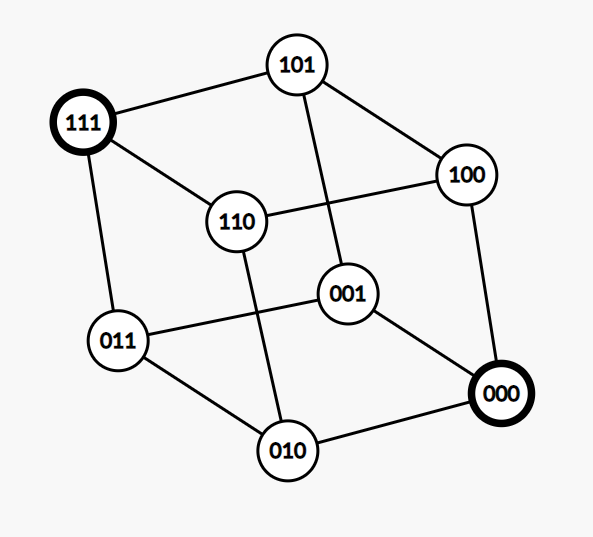 Using the idea of creating parity bits with the XOR operator, we can create what is called the Hamming$[7,4]$-code. We will combine multiple bits to create each of the parity bits for this code. This code will take in a four-bit input and encode it into a seven-bit codeword. This process will add three additional parity bits. For simplicity, let’s call the three parity bits $x_1$, $x_2$ and $x_3$ and the original four bits of the message $m_1$, $m_2$, $m_3$, and $m_4$.

Our goal will be to use these parity bits to help us decode. To do this we can let each of them contain data of three of the four original bits. This will allow us to use which parity bits are incorrect to determine where the error occurred.

If we create the other two parity bits similarly, we will have the following definitions. With this definition, this code will have a Hamming distance of three.

With these parity bits, we can determine where the error occurred in the seven-bit message, by knowing which parity bits are incorrect. It is important to note that we must assume at most one error occurred. Any more than one error will be impossible to correct and our code will end up correcting a different bit. We could imagine creating a graph similar to what we did before. We would see that two errors would then push our message closer to a different valid codeword, which is exactly what we see with the repetition code.

Now that we have our parity bit, let’s break down how we can use them to correct errors. Assuming at most one error, we have eight cases, one for no error and one for each of the seven bits of the encoded message. Each of these cases will correlate to a combination of incorrect parity bits. We can determine these combinations that each error produces by looking at which equations involve which parts of the encoded message.

I have filled a table for each of these cases labeling which erroneous bit leads to which combination of incorrect parity bits. This gives us a way to detect a single error in any of the seven bits of the message.


From this, we can create a decoding process by checking these eight cases to determine where in the encoded message the error occurred. Let's work through a quick example to show how this process looks. Say we want to transmit the message `1011`. First, we need to calculate the parity bits:

A python implementation would be as follows.

To see this implementation used on a random error generator, look here.

With the Hamming$[7,4]$ code, we can correct one error for each 7-bit encoded segment of data. Let’s consider the real-world example with cosmic ray interference here on earth. According to an IBM publication, we expect to see one error per month per 256 megabytes of memory, due to cosmic rays. This might seem low, but for medical devices, this could mean life or death. The average Windows 10 computer uses about 2GB of RAM at any given moment.

With the expected number of cosmic rays provided above, we can calculate the probability of an error for 2GB of memory over an hour to be roughly 0.0107. If we extend this time frame to an entire day we get a probability of a little less than one fourth.

Errors are a fairly regular occurrence considering the amount of data we use, but rarely will they occur simultaneously. This means it is very unlikely we would have an unrecoverable situation. This is the perfect usage for the Hamming code, as we can correct these sparse errors.