How to Implement the Android LifeCycle Callback Methods

The Android lifecycle helps developers understand which states activities go through when a user navigates through an app. As a result, we can do proper operations at the right time and avoid crashes and other bugs.

An Android application has a lifecycle. It crosses through various stages from when a user opens and exits an application.

An application’s state helps you manage when a user opens an activity, pauses, resumes, stops, and destroys it.

Callback methods manage these states. You can override these methods to do a particular operation to give the right output to users.

Let’s say your application is running in the background, and you wish to save some data. In this case, you have to know about the activity lifecycle. This allows you to implement the right callback to handle the situation.

In this tutorial, we will explain different Android application lifecycle callback states. We will discuss all the states that apply in an android activity lifecycle.

We will develop an Android app that showcases where various activity lifecycle callbacks take place. This application will be life-cycle aware to understand which callback is being executed.

Let’s now dive in and discuss different Android application life-cycles and see how we can implement them.

First, ensure that Android Studio is running on your computer.

Then create a new project using the empty activity template. In this tutorial, we will use Java to build an Android application. Therefore, ensure that you select Java as your preferred programming language. 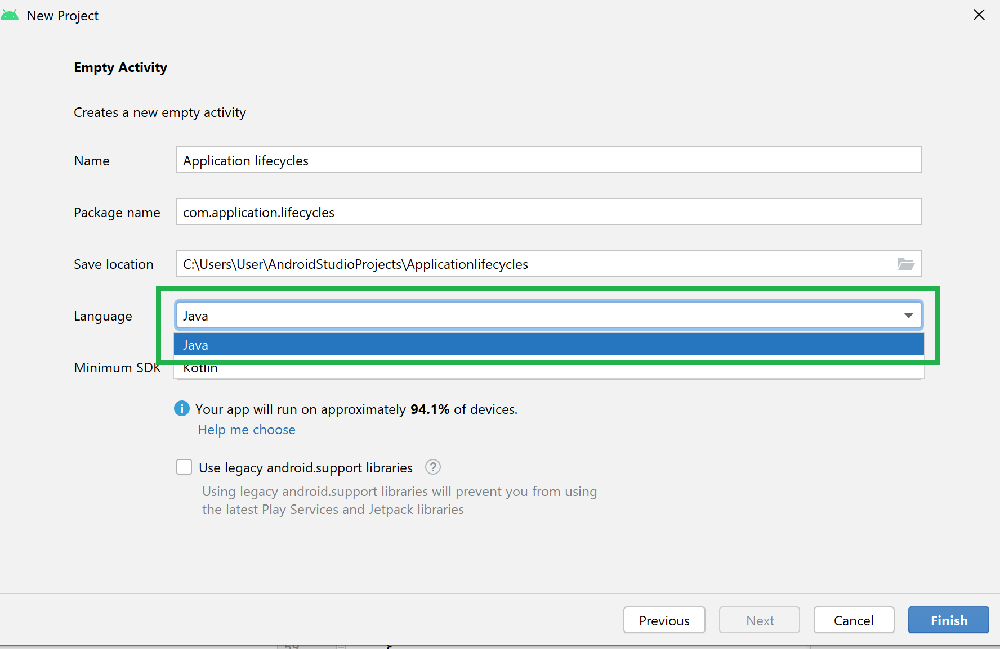 An Android activity goes through six major lifecycle stages or callbacks. These are: onCreate(), onStart(), onResume(), onPause(), onStop(), and onDestroy(). The system invokes each of these callbacks as an activity enters a new state.

Note that it’s not necessary to implement all these lifecycle callbacks in your Android application. As a developer, you should know when to implement each of these callbacks depending on the activity’s complexity.

Here is a simplified diagram that illustrates how users interact with an activity lifecycle. 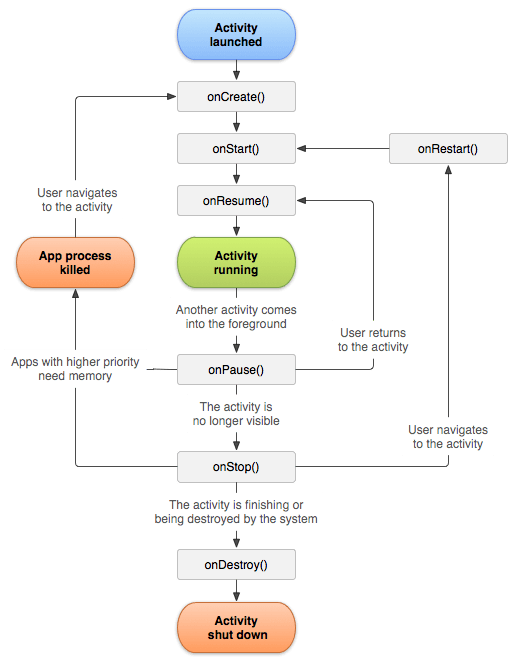 Let’s discuss this activity’s lifecycle and implement them in an actual Android application.

The onCreate() callback is compulsory in all Android applications. It is the first method called when we launch an activity from the home screen or intent. In other words, it is a default callback that is automatically created when you create a new activity.

It’s the only method that developers need to implement activity logic that should only happen once, such as initializing a ViewModel.

Android Studio automatically creates a class named the MainActivity.java file. This class contains an onCreate() callback. It is called when a user first opens the application.

When an application is installed on a device, it is in a doesn't exist state. This means the activity is dead.

Once a user opens the application, the lifecycle begins. The activity is brought to the foreground. In this case, onCreate() is immediately called to fire up the application. It may contain components such as the activity UI.

Here is a sample code that shows how an onCreate() method is implemented. I have added a Log and a Toast that we will use to read the activity’s states later in this guide.

In your MainActivity.java, make sure your onCreate() method has the lines below to print a Toast and Log message.

In this step, your activity is not yet visible. It remains in this state until the onCreate() function finishes, then it quickly moves to the next state.

When an application is started, the system will invoke an onStart() method. This callback is invoked to make the activity visible to the user.

Here is how onStart() is implemented.

onStart() can be called several times during an application’s lifecycle. For example, this method can be called when a user opens another activity and then navigates back to the previous activity.

During the activity’s lifecycle, the onStop() function is called. This means that some resources are released. The onStart() method can be invoked to initialize such resources.

Once onStart() is called, onResume() is immediately invoked. Every component associated with this activity is brought to the foreground state. The activity is now considered interactive.

At this point, the activity remains in the foreground state unless something happens to the application. This may include overly (multi-window mode application) interaction from other applications such as a phone call or when a user navigates to another activity.

onPause() is called when the user switches to another activity or a multi-window mode application. At this point, the activity has lost focus and is running in the background.

This callback will pause the activity and release some resources that this activity was consuming. All un-required operations are paused.

When onPause() is called, you might release some resources from memory. However, make sure that you initialize them again during the onResume() callback.

At this point, most of the activity processes have been stopped. However, the activity is still running in the background.

This life-cycle usually occurs after the onPause() method is executed due to the user switching to other activities or pressing the home button.

In such situations, it is used to release heavy resources and stop intensive operations that are not required while the activity is invisible.

Since onPause() is brief, onStop() can be used to save data to other channels such as databases.

Note: At this time, this activity is not destroyed yet. The activity instances are saved in a back stack. This means all stated are still active, including the views.

When a user opens it again, the application will not reload all instances. Instead, it will retrieve them from memory. This includes UI components such as the TextViews.

Since the activity’s states still exist, the onRestart() method can be called when the user restarts the activity. This means the activity will go back to the main screen and the user can resume interacting with its components.

As discussed, the onCreate() function is only called once in an activity’s life-cycle. So, when the onRestart() method is executed, the activity will resume by executing the onStart() then onResume().

This is the final callback that the activity will receive when it is stopped.

The method is called when there is a change in the configuration states such as screen rotation or language settings. The Android system will destroy the activity, then recreate it with the set configurations.

We will execute this application and read our Logcat messages to see how these different methods are executed. At this point, your MainActivity.java should have the following code: 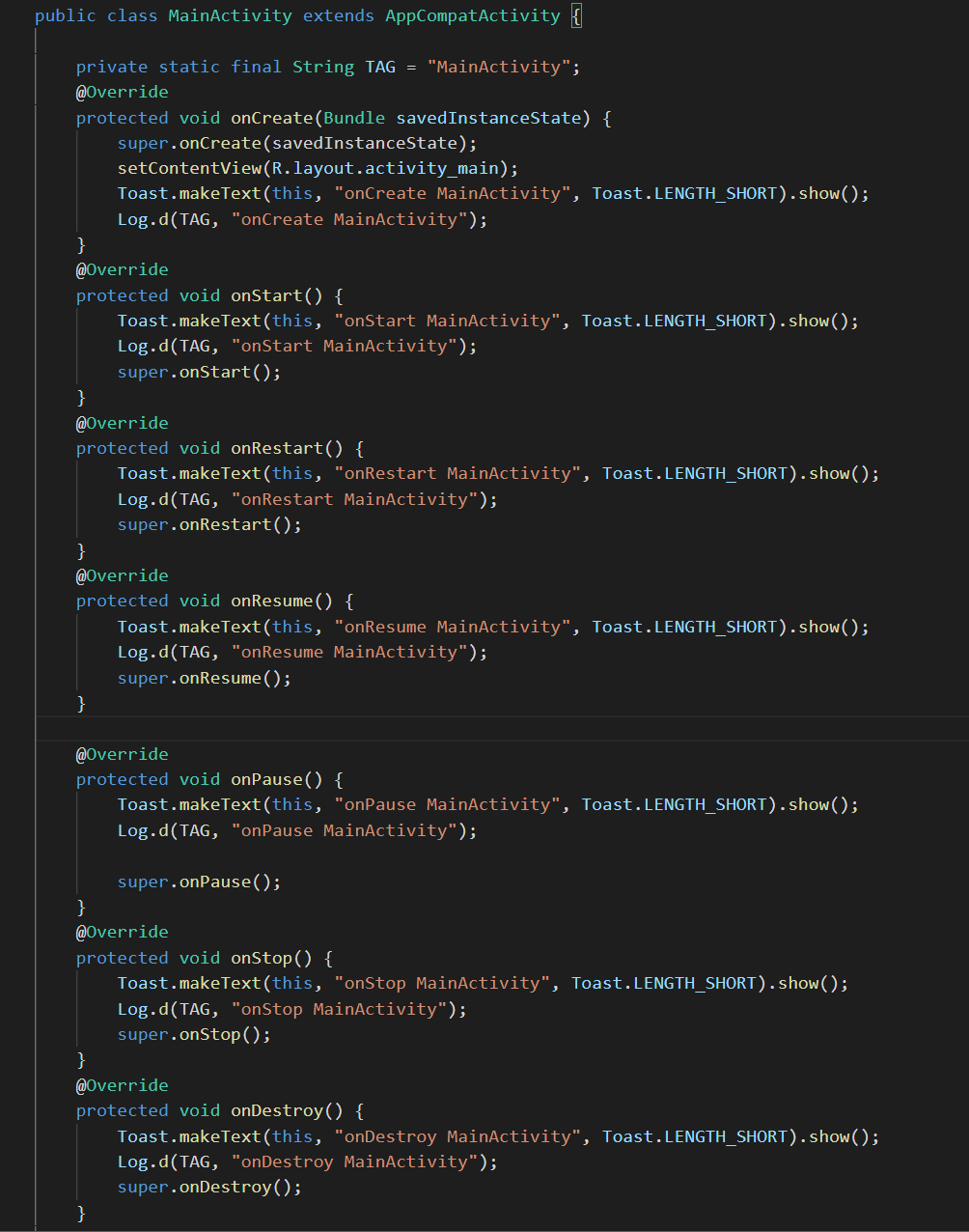 To test the app, we will add another activity so that we can read these methods as they change from point A to B.

In Android Studio, create another empty activity and call it Activity2.java We will add the same code as in the MainActivity.java file. However, we will change the Toast and Log messages, as shown below:

In your MainActivity, add the following method to help us navigate between the activities:

The intent above will assist us in executing and navigating to Activity2. To execute this method, we will add a button in the activity_main.xml, as highlighted below:

This is how the application should look like on your Android device: 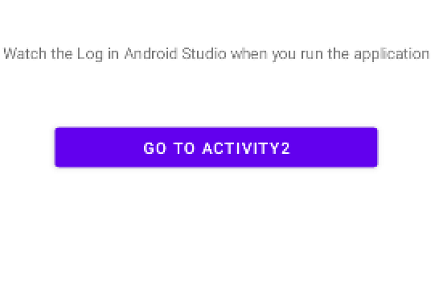 Before running this application, make sure you open the Logcat window in Android Studio:

Immediately after the app is launched, the following methods are executed sequentially:

The app begins by executing the onCreate() function. At this stage, the application’s components are not yet visible.

The onStart() method is then called, followed by onResume(). In this lifecycle, the user can interact with the UI components.

When Activity2 is brought to the foreground, onStop() will also be called on Mainctivity. This is because the Android system is releasing any resources that MainActivity is not using.

Note that MainActivity is not destroyed. This means that its states are saved in the memory, and we can retrieve them. To do so, navigate back to the previous activity and watch the Logcat messages.

As you can see, three methods are executed here: onRestart(), onStart(), and onResume().

When you back press, it means you are exiting the activity, and the callbacks will execute as shown below:

As you can see, when exiting the application, onDestroy() is not called first. The activity still follows its lifecycle.

As a developer, you should wisely choose what to execute when a certain method or callback is executed. You might not end up using all these callbacks in one application.

This tutorial has helped you learn the different lifecycle stages in an Android application.

I hope you find this tutorial helpful.