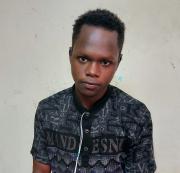 Elvis is an undergraduate student undertaking Bachelor of Science in Computer Science. He is an experienced Spring Boot developer spanning over 2 years.

Getting started with Time Series Decomposition in Python

Time series refers to the data that is sequentially collected over time. Various components usually contribute to any observed time series value at any particular point in time.

Thus a time series can be decomposed such that each component exists independently. Usually, it is challenging to work with a model whose most of the cause of variation is unknown. In time series, some of the causes of variation to the model are deterministic.

Analyzing a model with many causes of variation is computationally expensive. Therefore, we decompose those components whose variation is deterministic. The indeterministic ones, residuals, are then used to analyze autocorrelation.

To gain the maximum benefit from this material, the learner must have the following:

Components of the time series

At any given time, a time series is usually composed of the following components:

Let us understand what these components are: 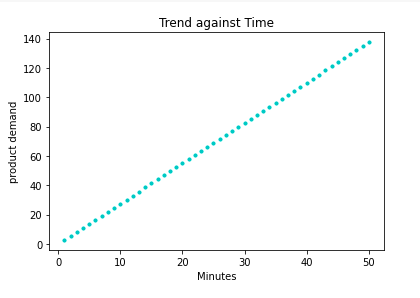 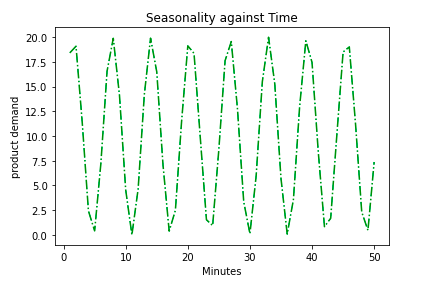 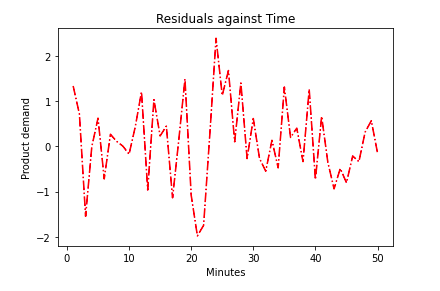 As we said, the time series value is usually a combination of the above components at any point in time. These values can be summed up all components, multiplying them together, or interacting with both operations.

Therefore, we use the following three models when decomposing a time series: 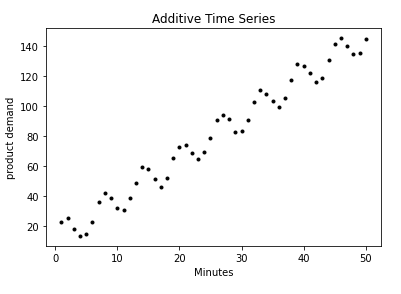 The additive time series model we are talking about is of the form: $O_t = T_t+S_t+R+t$

If the plotted series shows the seasonality and residuals to change with the change in trend, we use a multiplicative model to decompose our series. An excellent example of using a multiplicative time series model is shown in the figure below. 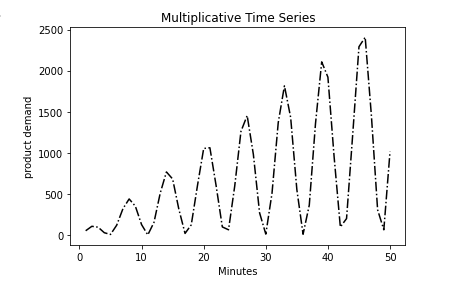 From the time series plot above, we note that the seasonality increases with the trend increase. A multiplicative time series model is of the form:

There are cases where we cannot either use an additive time series model or a multiplicative one to decompose our data. We use a special model known as the Pseudo additive model in such situations. This model is of the form:

In this tutorial, however, we will not consider this model.

Since we know various models we can use and decompose our time series model, let us now look at how we decompose time series in python.

To make this session exciting, we shall stimulate data for each time series component and later aggregate them all using both an additive and the multiplicative model separately to obtain two-time series data for each kind of model.

After this, we shall then decompose these models back to those initial components we created. By so doing, we will have saved ourselves time spent on real-world data preprocessing.

Now, let us get started.

As usual, let us first import the needed libraries for this session.

To begin, let us set the range of our time series.

Let us create the trend component of our time series.

We can plot this trend using the code below. If we do so, we should obtain an output similar to the one provided below.

Now that we have the trend component let us simulate our seasonality component. To do this, we shall adopt the sin function as it is the function that can yield those seasonal fluctuations of time series in the best way.

The remaining component to create is the residual component. Let’s simulate it using the NumPY random function.

We then plot this residual component as follows:

The first thing we shall do with these components is to create an additive model of our time series. So let us run the code below and get this done.

Now our additive time series model is created, and we can go a step ahead and plot it for visualization as follows:

Similarly, let us create a multiplicative time series. To make the pattern more apparent, in this case, we will ignore the residuals in the model. We then create our model as follows:

To this point, we have created our two types of time series. The task in our hands is to decompose these models independently back to their initial components.

In this section, we shall get started by decomposing the Additive time series model we just created.

Let us import the required library.

The code below will decompose our model into its initial components.

We can plot the decomposed components by running the following code.

We shall follow similar steps as the ones we used to decompose the Additive time series except that we specify the model as the multiplicative time series.

So the following code carries out this activity.

We then plot the decomposed components by running the following code block. 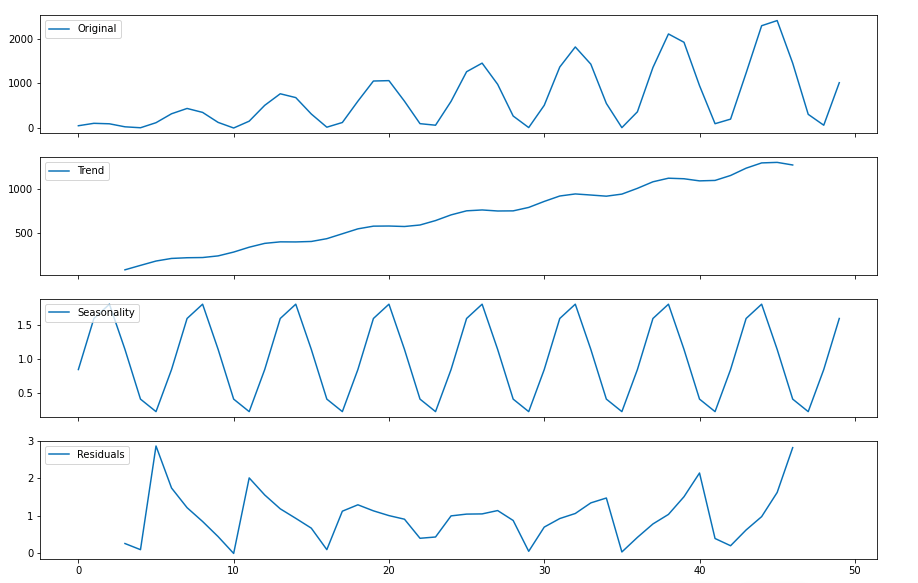 Now, this was a demo, and as we know, we are not data scientists only to deal with the problem we create on our own. Instead, we train ourselves to handle real-world challenges using hidden knowledge in the data.

So, to learn the correlation in real-world data, we shall be required to decompose the data first to eliminate the deterministic causes of variation in the data. So, to train ourselves on decomposing these data, let us first learn where to quickly obtain time-series data for practice.

To fetch time series, one can visit Kaggle, Google trend, and many more. However, here we will not make our way to those sites. Instead, we shall use a famous python library that provides us with the stock market performance datasets for the big companies such as Amazon, Tesla, FB, Ali Babel, and others.

This python library is called yfinance. To access data in this library, we need to make sure it is installed in python.

In the Google colab, we install this library using the code below:

Now that we have installed this package, it does not mean we will access data from it directly. To use the data it contains, we need to load it. So we load it as follows:

We can now access any time series data loaded in the yfinance library. So, for instance, we can access data for the Facebook stock as shown in the code below.

For instance, we can obtain Facebook stock data as follows:

This code should return an output similar to the one below.

Above is multivariate time series for the Facebook stocks data. You can change the tickers’ value and download datasets of other companies such as Amazon “AMZN,” Tesla “TSLA,” etc.

Since the Facebook data we have above is a multi-variant time series, which we will not discuss in this session, let us extract a univariant one by indexing a column, High, and plot it.

This code returns an output similar to the one provided below:

We note that the series has an increasing trend upon plotting the High time series. Also, the time series has no seasonal component, instead, it has a Cyclic component. That is why we accessed data within a year-plus period of more than one year.

Therefore, we will decompose this data using the same procedure we used before, but the frequency, in this case, will be more than 12 months. Let us see this in the code below:

Now we can run the following block code and get those components printed. 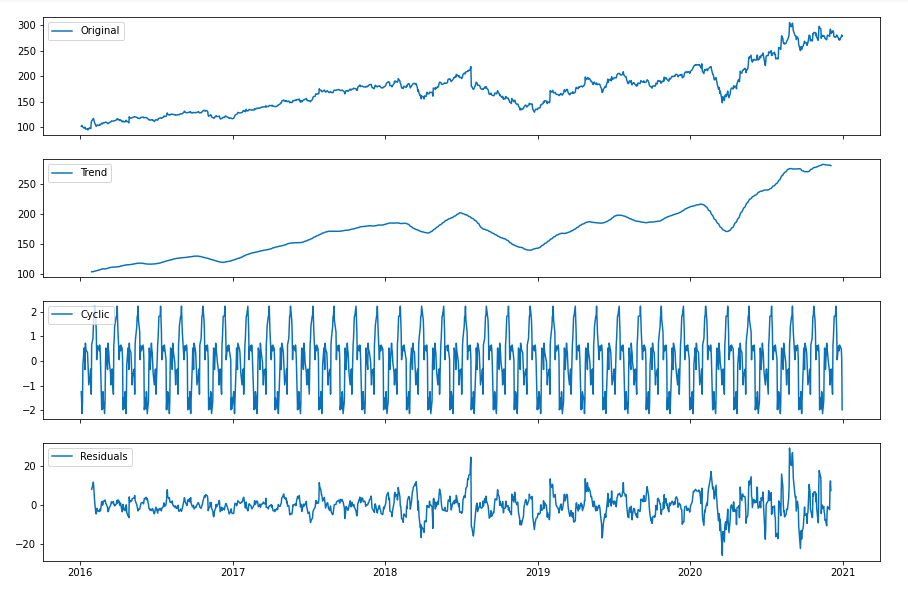 As we can see, setting the time series frequency as 36, the trend was well captured. Also, if we look at the residuals plot, we can see no well-defined pattern. Therefore we can say our time series was well decomposed into its components.

We have reached the end of our study. We learned what time series and its components are. We discussed three types of models used in the time series decompose, and also we described under which situation a particular model is appropriate to use.

Using a simple approach, we simulated a time series data and later decomposed it back to the initial components we had created.

We learned of a library from which we fetch time series data. We fetched data for the Facebook stocks and decomposed one of its time series from that library. This end finalizes our session, and I hope you enjoyed it. 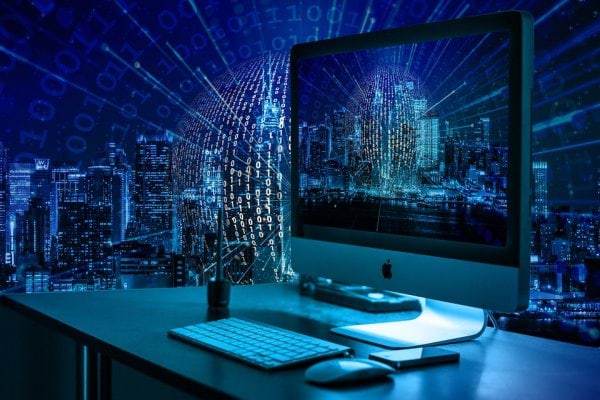