Steganography - An Experiment in Python

In short, this means we use the encrypted RGB data to include other data, which significantly impairs the visual representation of the image. The hidden message is transmitted by increasing the bandwidth of the original message or by manipulating the file format. Since steganography is often used in phishing and as a way for malicious software to exfiltrate data, it is very difficult to detect it.

To understand how image steganography works, we need to take a look at some of the basic ways in which text can be hidden in image files. Due to the nature of image file formats, it is not only possible to hide text strings, but also to hide entire files in jpg or other image formats. In a technique known as secret-key steganography, steganography is applied to a message that already has a key. This ensures multiple levels of security.

In malware, image steganography can be used to hide payloads within the code itself, or it can call additional code or executable programs associated with the attack. The attacker can also identify and replace the methods of the steganography in other ways, for example in the form of a command and control (C & C) script. The recent attack on Jeff Bezos’s phone was one such act. The code was maliciously placed under the media file. Upon downloading, the code started executing in the background and transferred all the data illegally.

There are several simple detection methods based on file scans, such as the steganography tools found on the Internet. But they are poorly developed and not extensive enough to detect such malicious acts.

Military intelligence services, however, use high-quality proprietary tools allowing automation to the process of detecting steganography. A lot of analytical tools can also be used if there is a suspicion that stealth is being used to hide messages.

We will build an example to demonstrate the encryption of data into images. The data is represented using its ASCII value. Each letter is represented using 8bits, or 1 byte. Each pixel in the image has three bits, one each for RGB frames. Each pixel can hold 3 bits. We will encode three pixels together, making a place for 9 bits. Out of the 9 bits, we will store 1 letter in the 8 bits and one (End Of File)EOF bit. If the EOF bit is high, then it indicates that the end of the message has been reached. Otherwise, it indicates the program to read more pixels for decoding.

We have a simple encryption technique included in the algorithm above. Instead of encoding 3 letters together, we can encode any other number of letters. Unless anyone knows this number, decrypting the file is going to be tough.

Let’s focus on encoding the message inside the encoder.py file. The algorithm for encrypting data into the image is as follows:

We will be using the Tkinter library to implement the GUI. It is a fun library to learn. Since this is an article on steganography, covering Tkinter is out of the scope. However, we have ensured to make the code readable by adding suitable comments when necessary.

We use CV2, numpy, and PIL for image processing. These are extensive libraries which can be discussed in detail in another article. For now, I have included comments for the usage of the functions. 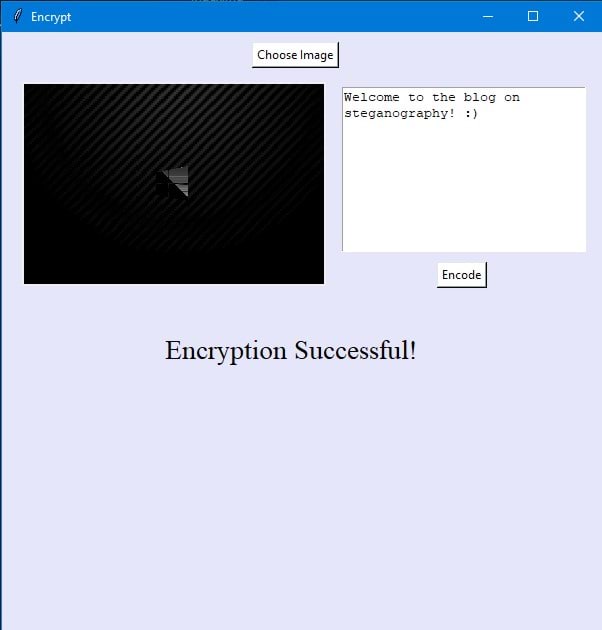 The algorithm to decode the encrypted file is as follows: 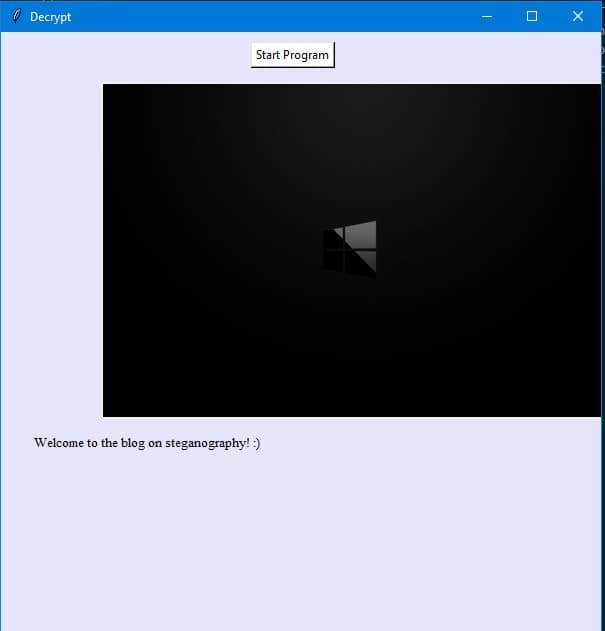 We have learned about steganography and implemented a shortcode using Python’s inbuilt module Tkinter, cv2, numpy, and Pillow library. The above code represents the workflow behind steganographic processes. We hope you enjoyed the tutorial and are inspired to know more about the field of steganography and cryptography. Data security has an unbounded future which is just starting to rise. Stay Safe. Be legendary.