Jacob Muganda is an undergraduate student at Meru University of Science and Technology pursuing a degree in Computer Science. Muganda is particularly interested in Networking and Designing Algorithms. In his free time, he enjoys hiking and cycling.

Setting Up Hotspot On Kali Linux

Kali is a Debian-based Linux distribution used mainly in advanced penetration testing, also known as pen-testing. It is freely available and accessible to professionals and learners.

Kali Linux has a wide range of features and tools for penetration testing. Each distro of Linux has an intended purpose for implementation; Kali Linux majoring in security.

In general, it is a nice idea to disable services that you do not use. Kali makes it easy to do this since network services are disabled by default. As long as services remain disabled, they do not pose any security threat.

However, it would be best to be careful when you enable them because it has no firewall by default. So, if they listen on all network interfaces, they are effectively publicly available, making it vulnerable.

This article will look into the processes used to create a mobile hotspot on Kali Linux and other Linux distros such as Ubuntu.

Throughout this tutorial, we are going to be using Kali Linux to create our hotspot. You can use any other Linux distribution of your choice.

To access the available network drivers, type the following command in the terminal:

The command above works only for wireless drivers.

In the case of using a USB adapter, use the command shown below:

The output is as follows:

To create our hotspot, we need to install the required tools. The first and crucial tool is hostapd, which acts as the hotspot server.

To install hostapd, type in the following command:

The second tool we will use is dnsmasq. It is a lightweight, easily configurable, DNS forwarder designed to provide DNS services to small networks.

It can serve the names of local machines which are not in the global DNS. The DNS server supports both static and dynamic DHCP leases, multiple networks, and IP address ranges. The dnsmasq will act as the server to the DHCP.

To install dnsmasq, type in the following command:

Once done with the installations, we can move to the next step.

We will proceed to check the just-installed processes. If already started, stop those in progress, and deter them from starting during the system’s start-up. This is because it turns off the Wi-Fi and turns it into a Wi-Fi hotspot.

Below are the commands used for stopping and disabling updates of the services:

To stop services in progress, we use these two commands:

To disable services already installed, we use these two commands:

The output is as follows: 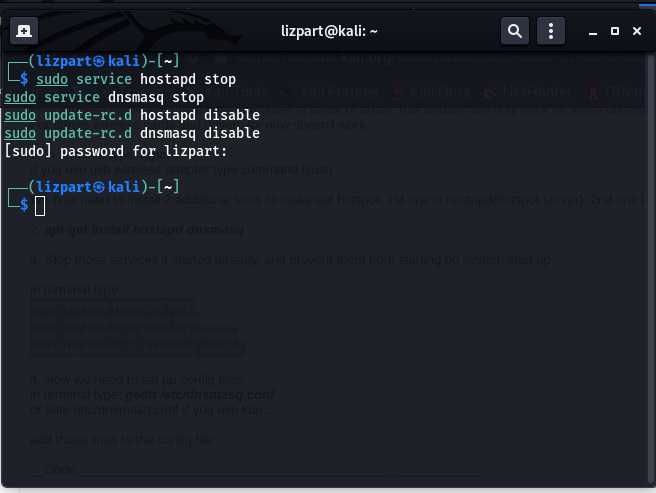 Configuration is vital since it reduces operation tasks, optimizing IP addressing planning, and easily manages user mobility. After installing the services, we will need to configure the necessary files, i.e. hotspot.sh.

We will begin by typing the command below in our terminal:

After running the command, write the code below under hotspot.sh for configuration:

The preceding step in this stage involves performing hostapd configuration. To perform this configuration, type in the following command in the terminal:

To properly configure hostapd, add the following code to our configuration file:

In the code above, wlan0 is your Wi-Fi card. WLAN stands for Wireless Local Area Network. The number 0 is the number allocated to the card. This is because the number of cards starts from zero and goes up (0,1,2,3, etc…).

You can change your SSID name and password with your desired choice. The above configuration will create a hotspot called a Wi-Fi connection with a password.

Note: You can create the configuration file anywhere you want, naming it as hotspot.sh using an editor of your choice.

After completing the configuration, we will stop the running services by typing in the commands below:

In this part, we will be using the graphical user interface to do the configurations. Go to advanced network settings, click on the gear icon to open it up. 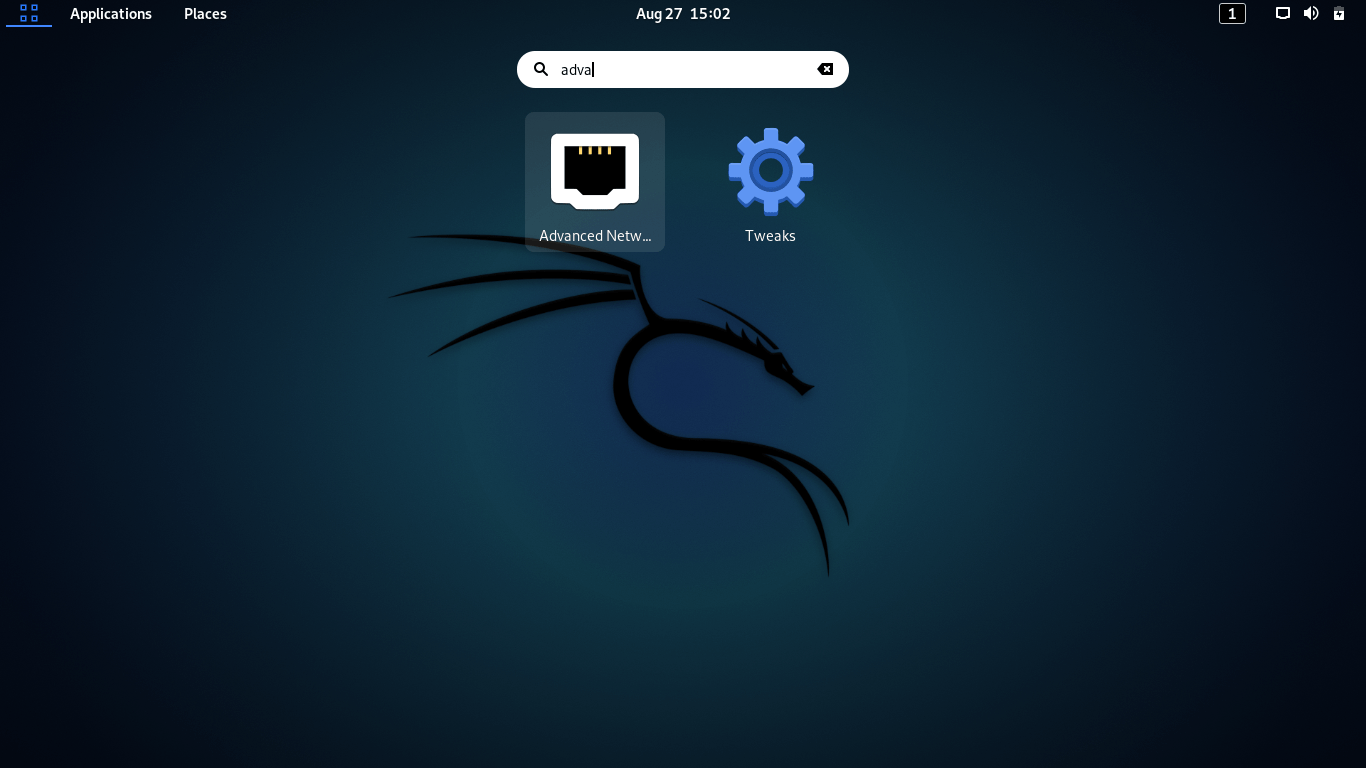 To proceed with our configuration, follow the steps below:

Step I: You click the “+” button in the window, and another window pops up. In this new window, we are going to do the configuration of your hotspot. 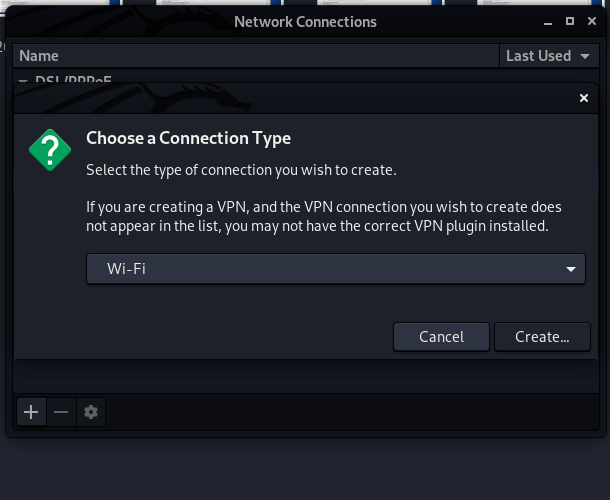 Step II: Under the network type, select “Wi-Fi”. Ensure your configuration resembles the second screenshot below: 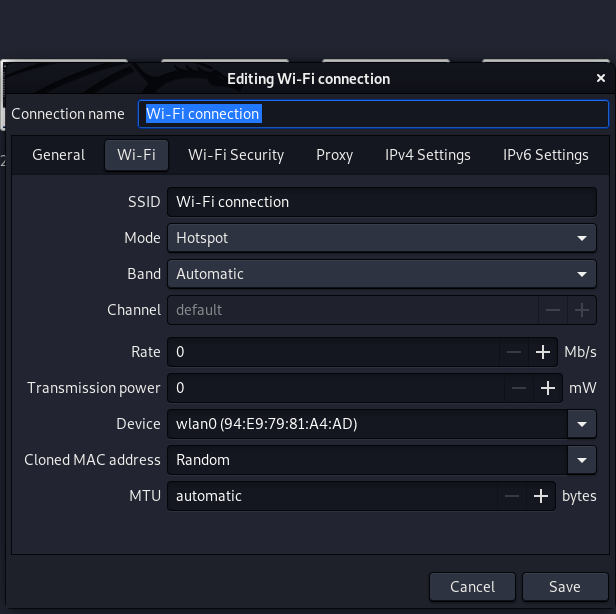 Step III: To set a password, click on Wi-Fi security and select WPA & WPA2 Personal. Below the input box, key in an eight or more memorable digit password of your choice and click save.

Security is an essential feature; this encryption protection is designed for homes and small office networks and does not need an authentication server.

You’ve done it! Close all the opened windows, enjoy your newly created hotspot, and share it amongst computers, mobile phones, etc.