The year 2020 was a challenging one that resulted in some crucial, groundbreaking innovation, and changes across domains. The pandemic has compelled various operations and workforce to go remote, and has left the infrastructure susceptible to increased cyber attacks.

The need for security has undoubtedly been reinforced. Anti-malware software, intrusion prevention systems, firewalls, Virtual Private Networks (VPNs) are some of the rudimentary technologies required to safeguard your resources these days. In this article, we will focus on one such security technique i.e Secure Sockets Layer/Transport Layer Security (SSL/TLS) communication encryption protocol.

In simple terms, encryption is the process of converting data into another form (referred to as Ciphertext) that can be understood only by parties that possess a secret decryption key. To everybody else, it’s gibberish. Google’s transparency report shows a significant increase in the amount of encrypted traffic on the internet over the last few years. As of December 2020, approximately 95% of all traffic across Google was encrypted. Many web browsers have been relentlessly pushing websites to use encryption by marking HTTP sites as unsafe.

Secure Sockets Layer (SSL) and its next substitute, Transport Layer Security (TLS), are encryption protocols designed to ensure the security, reliability, and authenticity of the information exchanged. Although SSL is deprecated and replaced by TLS, the industry uses the two terms interchangeably. To avoid confusion, we’ll continue to refer to TLS as SSL/TLS throughout this article.

The earliest original SSL protocols were developed at Netscape. SSL 2.0 became the first version that was released to the public in 1995. SSL 2.0 had vulnerabilities and consequently, SSL 3.0 was developed and released the following year.

In 2014, SSL 3.0 was found to be vulnerable to the POODLE attack which exploits protocol fallback to steal confidential information like credentials, passwords, session cookies. It was deprecated in 2015. 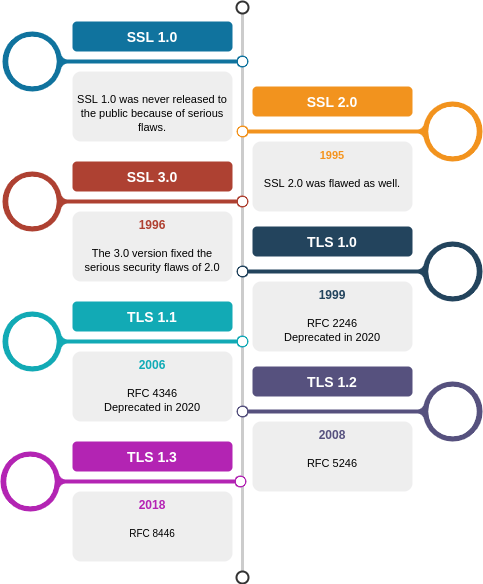 Before we dive into the working of SSL/TLS, let’s familiarize ourselves with a few technical terms:

How does SSL/TLS work?

SSL/TLS handshake is a part of an SSL/TLS exchange wherein the two endpoints exchange messages and establishes the details of their communication. Since SSL/TLS is most widely used to encrypt web traffic, we’ll use a web client and server as examples of endpoints.

The steps of TLS handshake with RSA key exchange algorithm are discussed below: 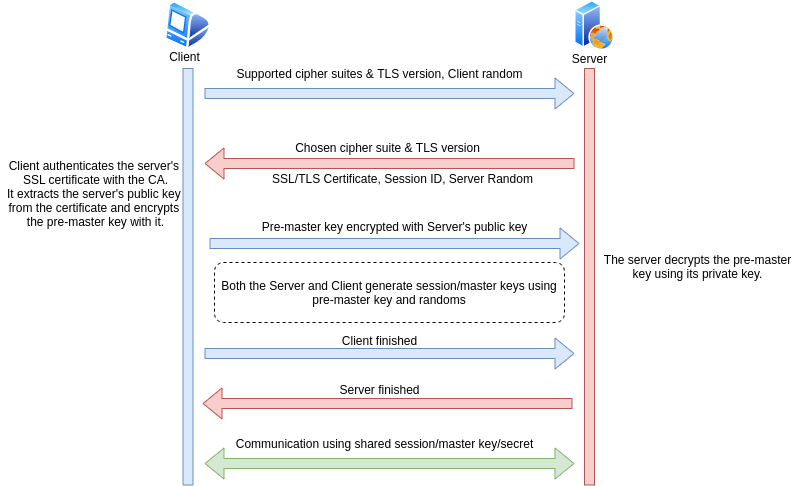 Note: RFC 5246 lays down the messages that are exchanged during the SSL/TLS handshake.

SSL/TLS is a cryptographic protocol used to communicate and interface on the internet. It is widely used for secure web browsing, audio/video conferencing, email and file transferring, voice-over-IP, instant messaging and more. TLS 1.3, currently in use, comes with notable security improvements. It outperforms its predecessors in terms of speed and efficiency. With 85% of the web traffic encrypted today, there’s no doubt that in a few more years, TLS security will be ubiquitous.