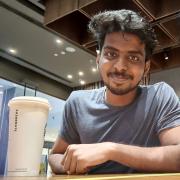 Mohan Raj is a Full Stack (MERN)/ React-Native developer and a last year CS Undergrad in Chennai, India. He wants to help other developers avoid some of the same challenges he faced while developing various features.

In this tutorial, we will be building a Livestreaming app with real-time engagement using React Native and Agora.

By the end of this tutorial, you’ll know:

The fundamentals of React and React Native will not be covered in this tutorial. If you are not comfortable with the fundamentals, this is a helpful tutorial that you can go through before beginning with this project.

Founded in 2014, Agora.io is a service provider for real-time voice and video. Its core technology is real-time communication (RTC). Agora provides SDKs to build apps that require real-time engagement like:

Agora supports up to 1 million users in a live broadcast channel. They also recommend limiting the number of users sending streams concurrently to 17 at most. You can learn more about Agora’s capacity here.

Agora is a paid service, but the first 10,000 minutes are free every month. You can check their pricing here.

We’ll be going through these steps in this article:

If you want to take a look at the final code, check out the GitHub Repo. I’ve made a commit for every step in this tutorial.

Head to Agora and create an account. You can reach the signup page from here.

Fill in the details and create an account or you can signup with Google, GitHub, or Cocos. Once you’ve signed up, you’ll see the dashboard.

You’ll see this form. Fill out the Project Name and set the Authentication Mechanism to Testing. 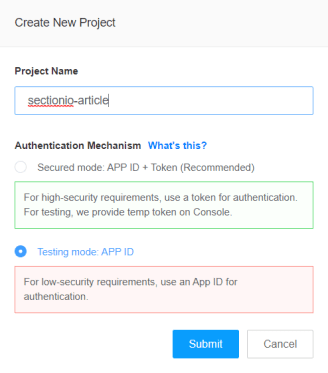 Once you hit on submit, it’ll create a new project and you should see it on the Project Management Console.

Now, click on the closed eye icon near the App ID to reveal it and copy that App ID. We’ll need this later while setting up Agora in our app.

IMPORTANT - We will not be using Expo in our project. Agora’s React Native SDK does NOT work with expo managed workflow. This is because video calling SDKs need native modules that are not supported by Expo.

You can follow this documentation to set up the environment.

To focus more on the Livestream, I’ve prepared a starter code. You can clone it from this repository on GitHub. Follow the Repository’s README for instructions.

In the starter code, the Navigation is set up using a Stack Navigator with the Home screen and a dummy Live Screen. You can find the documentation for the React Native Navigation here.

The Home Screen has 2 buttons, Start and Join. The Join button has a text input associated with it to provide the channel ID to join the stream. When the text input is empty, the join button will be disabled.

This is the Home Screen you’ll see when you open the app.

You can install these in advance or while going through the article.

To install a dependency, run:

After installing the packages, for iOS, go into your ios/ directory, and run:

As you add more native dependencies to your project, it may bump you over the 64k method limit on the Android build system. Once you reach this limit, you will start to see the following error while attempting to build your Android application.

Use this documentation to enable multidexing. To learn more about multidex, view the official Android documentation.

When we create or join a livestream, we need to give a channel ID to Agora.

You can learn more about route props here.

Let’s install the UUID package to generate a channel ID.

In React Native, you will run into an error with the message crypto.getRandomValues() is not supported when you use uuid.

To fix this, you will need to install react-native-get-random-values.

Let’s install the react-native-get-random-values package to fix the issue.

After installing the packages, for iOS, go into your ios/ directory, and run:

In screens/Home.js, import both of those packages.

We must import the react-native-get-random-values before the uuid import to avoid the error.

In the createLive function, we’ll generate a new UUID and pass it as a route prop for the Channel ID.

In the joinLive function, we’ll pass the text input’s value for the Channel ID.

Notice that we are also passing a route prop called type along with the channel. We’ll be using this to determine whether the user is a broadcaster or an audience user on the Livestream page.

When you press these buttons, it should be the same as before. But, we can access the channel route prop in the Live Screen.

You can learn more about the useNavigation hook which is present in the starter code here.

Setting up the live screen

To use Agora, we need to install react-native-agora.

Let’s install it using the commands below.

After installing the package, for iOS, go into your ios/ directory, and run:

In here, we need to import the RtcEngine from react-native-agora.

RtcEngine has a function called create on it, that will create an Agora engine. We need to call that function when the component mounts. It’ll return the Agora engine instance.

The useEffect hook accepts a function that will be executed on any state update. It also accepts an array of state elements, to limit the call of this function, only to the state changes of those elements. When we pass an empty array, the function will only be called when the component mounts.

Inside the function body, you can return a cleanup function that will get executed when the component unmounts.

To learn more about the useRef and the useEffect hooks, refer here.

So let’s import useEffect and useRef from React.

RtcEngine.create('Your App ID Here') takes one argument, that is the App ID that we copied from the Agora Project Management Console.

We need to destroy the Agora engine instance when the component unmounts. If you forget to do this, the App may still be transmitting and receiving video and audio in the background.

Next, we need to enable video in the engine to send and receive video. The Agora engine instance has a method called enableVideo on it. But before we call that method, we need to get permissions from Android to access the camera and microphone.

This step is only for android, not for iOS.

Now, we need to call this in our useEffect before init.

Let’s import it and set the Channel Profile to Live Broadcasting. To learn more about ChannelProfile, refer here.

Remember, we don’t need to set the Client Role if the user is the audience. It’s the default value.

Now that we have set all the config required for the Livestream, we need to join the channel.

Since init is an async function, we can add a .then() to it and join the channel inside it.

To join the channel, the Agora engine instance has a joinChannel function on it. It takes 4 arguments, Authentication Token, Channel ID, Optional Info, and Optional UID. To learn more about joinChannel, refer here.

For the Channel ID, we’ll pass what we get from the route props.

This is because we’ll use the UID of the Broadcaster to listen to state changes and establish the remote feed on the audience’s side.

If the Optional UID is set to 0, the SDK assigns a UID and returns it in the JoinChannelSuccess callback.

To ensure we have joined the channel, we can add a JoinChannelSuccess listener to the engine. Let’s add that in the init function.

Now, when we navigate to the Live screen page, we will see the console.log message from the JoinChannelSuccess callback.

This means we have joined the livestream. But we can’t see the livestream feed yet. The next step is to display the Remote Feed of the Host to the Audience and the Local Feed to the Broadcaster.

On the Broadcaster’s side, we’ll use RtcLocalView to display the feed of the Local Camera.

On the audience’s side, we’ll use RtcRemoteView to display the stream from the Broadcaster.

We shouldn’t be showing these until the user joins the channel. So, let’s create a state for that and set the initial value to false.

Now, we can use the JoinChannelSuccess listener to update the state.

We can use this state to display a loading screen.

If the user has not joined, we’ll return the Loading Screen.

When the joined state is set to true, we need to show the livestream.

The RtcLocalView requires only one prop, that is the channelId prop. The rest are optional.

The RtcRemoteView requires 2 props. One is the channelId and the other is the uid prop.

The uid prop decides which user’s stream in the channel is to be displayed on this view.

We can also pass styles to the RtcLocalView and RtcRemoteView. Here, we will pass our host’s UID, which is 1.

You can learn more about the Share component here.

Let’s write the function to call when we press the share button.

Let’s add a button to the Live screen page.

Let’s add another button in the Live screen to switch the camera when the user presses it.

The Agora engine has a method called switchCamera on it to toggle between the front camera and back camera.

Agora provides a listener called RemoteVideoStateChanged. This listens for any state changes in the video of all the users in the livestream.

When a video state changes, it provides the UID and the Video State of that user. To learn more about the RemoteVideoStateChanged listener, refer here.

Let’s add a state for the broadcaster’s video state and set the initial value to Decoding. The react-native-agora package provides an enum for all the remote video states.

You can learn more about the VideoRemoteState enum here.

Let’s add the RemoteVideoStateChanged listener in the init function.

We only need to listen for the host’s video state, and we know the Host’s UID (is 1).

Let’s add a function to provide a text message for each state.

We can display the remote feed or the state message based on the broadcaster’s video state.

Styles for the Video State message:

Congratulations, 🥳 You did it.

If you’d like to learn how to build a Video Conference app with React Native and Agora, refer to this article.