Convolutional Neural Networks (CNNs) have been used over the years to solve problems in computer vision. But, over the last year, we’ve seen transformers with self-attention modules replacing CNNs. A good example is the Vision Transformer.

Can we do away with both CNNs and attention mechanisms to only using Multi-Layer Perceptrons (MLPs) to solve computer vision problems in machine learning?

No CNNs, no self-attention mechanisms, only MLPs?

Well. This paper by Google shows that neither CNNs nor self-attention modules are necessary to solve computer vision tasks. As this article will show, it’s impressive to see that this pure MLP architecture attains competitive scores compared to state-of-the-art models on image classification benchmarks.

This article will explain how they achieve this. But before I explain the model, let’s first understand the working of an MLP.

Before reading this article, I recommend that you read my two previous articles. The Vision Transformer and the Basics of Convolution Neural Networks articles. This article builds upon concepts introduced in those articles.

MLPs have been around since the 1980s. They have been used as classifier algorithms and to solve simple regression problems. They have found applications in image recognition, machine translation, and speech recognition.

MLPs borrow their main concept from the human brain. The general architecture of an MLP consists of three layers:

Like most artificial neural networks, MLPs also use backpropagation to train the network.

Here is an overview of the MLP architecture 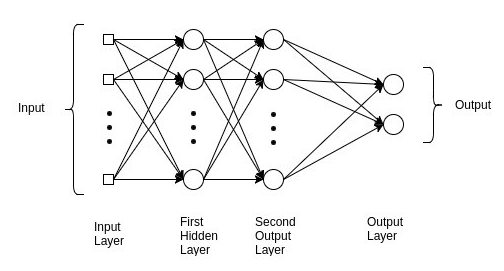 Before this research on the MLP-Mixer, MLPs were deemed insufficient in solving advanced problems. It has been replaced by the likes of Convolution Neural Networks and Recurrent Neural Networks to solve complex problems. But, with a few tweaks to the original MLP architecture, the research team at Google was able to use this simple, but powerful architecture to build the MLP-Mixer.

Let’s now take a look at the MLP architecture. 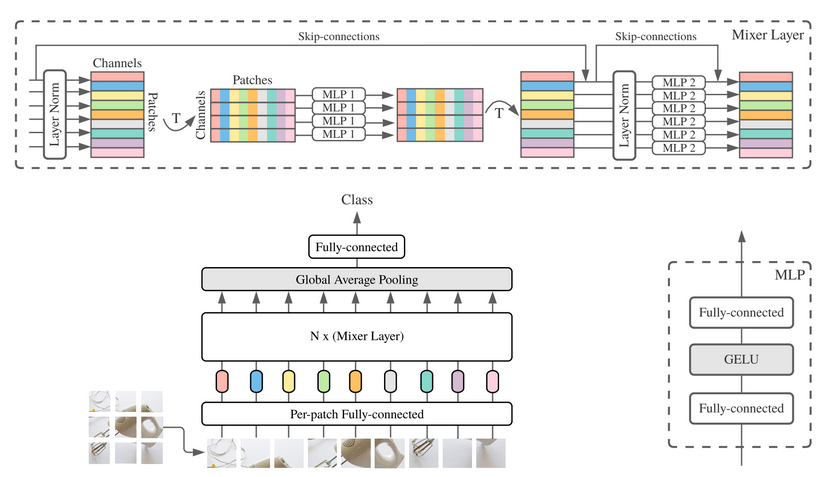 In this layer, input images with dimensions (H, W) are divided into a sequence of S, non-overlapping image patches. Each patch is of dimension (P, P). So, to get the number of patches required for each image, you divide the dimension of the input image by that of each patch. Thus, S = (HW/P2).

These patches are linearly projected through a projection layer. This projection layer is simply a fully connected layer with an output dimension of C. This results in a 2D input table with image patches (tokens) named X on the paper which is used on the mixer layers.

The mixer layer contains two types of MLP layers. It is important to note that the idea of these two layers is borrowed from CNN.

These two MLP layers are alternated by reshaping and transposing the layers. This enables the interaction of both input dimensions.

The outputs of the channel-mixing and token-mixing MLP are the same dimension as the input. For example, an input of (8X4) will result in an output of (8X4).

As shown in the diagram above, each MLP block contains two fully connected (FC) layers and a non-linearity function known as Gaussian error linear unit (GeLU).

This is the last layer in the MLP-Mixer architecture.

It consists of a standard classification head, a global average pooling layer, and a linear classifier.

All these components combined are what make up the MLP-Mixer architecture.

For the experiment, they first perform pre-training on two public datasets. The ImageNet-21K and ILSVRC2021. They use the Adam optimizer with a batch size of 4096.

They performed data augmentation techniques on the input images such as RandAugment. They used dropout, stochastic depth, and mixup which have become common practices when training such large networks.

When fine-tuning the model, they used a batch size of 512 together with the SDG optimizer instead of the Adam optimizer.

They experimented with model sizes; small, base, large, and huge. This is achieved by playing around with the number of parameters in the model.

With all these variations in the model architecture, they compared their results with state-of-the-art architectures such as the Vision transformer (ViT), Big Transfer (BiT). Results from their experiment show that the accuracy increases with the model size. Additionally, in terms of speed, the model runs 2.5 times faster than ViT and BiT.

Though these results are not extraordinary compared to current models, it is amazing to see how this simple architecture competes with advanced architecture.

It is remarkable to see how a simple MLP-based model can compete with state-of-the-art models. Attention-based and CNNs in our case. Though some of the ideas behind the novel MLP-Mixer model are borrowed from works of literature on CNNs and Transformers, it is still interesting research. It would be amazing to see if this design could work to solve problems in other domains such as Natural Language Processing.