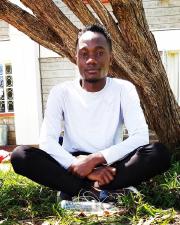 Bejamin is a Computer Science student at JKUAT with an interest in Machine Learning and Deep Learning. He likes playing chase, taking nature walks and learning new things.

Understanding Probability Distributions and their Simulations in R

R has functions for obtaining density, distribution, quantile, and a random value.

When working with probability distributions, one should know four major concepts:

Fortunately, R has functions for obtaining density, distribution, quantile, and a random value.

The general R naming is given as:

Where the name in all the four cases above represents the name of the given distribution.

Random value generation is a regular activity in machine learning. For example, to estimate the posterior distribution parameters in Bayesian statistics, we need to generate a random sample from an appropriate distribution, which can sometimes be difficult or impossible to achieve.

To draw samples in such cases, we use Monte Carlo simulation methods. For the learner to advance to such a level, first, they must know how we generate random variables from a certain distribution.

This article will cover the continuous and discrete probability distributions and how we simulate them and draw samples from the simulated distributions in R.

A continuous probability density is a probability distribution where the random variable X can take on any value within an interval.

There are various types of continuous probability distributions. Let’s look at each of them below:

To generate random samples from this distribution, we use the runif() method in R. This method takes three parameters, n, a, b, where n is the number of samples we want to generate, and a and b is the lower and upper bound of the distribution respectively. 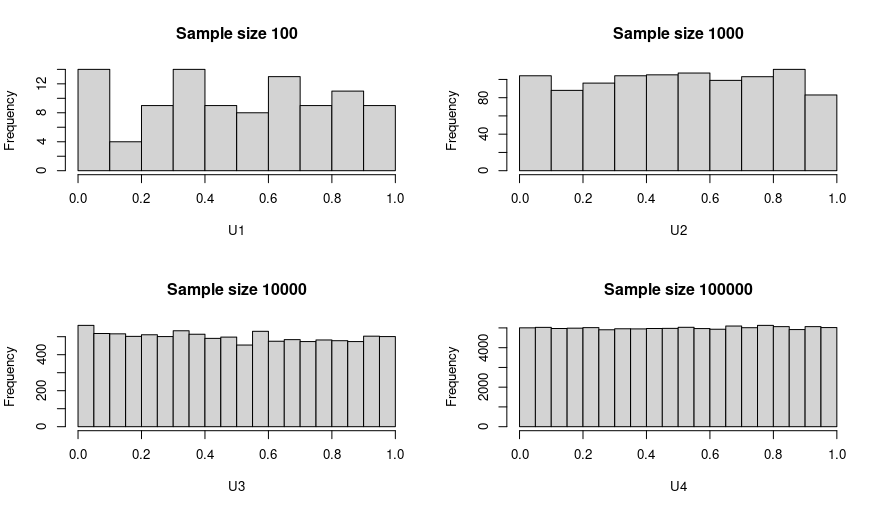 This is a probability distribution in which values are symmetrically distributed around the mean. The normal distribution has a pdf of the form:

Let’s generate a sample of random variables and visualize the results with a density histogram. 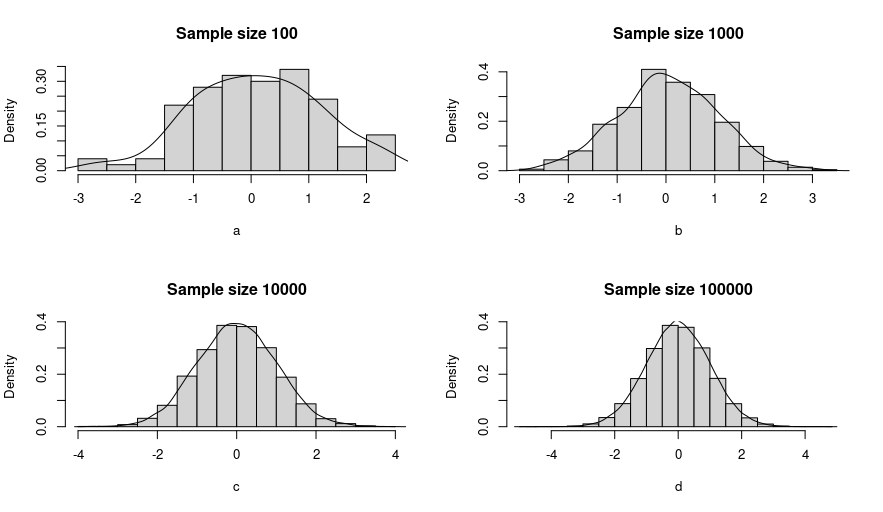 As we see from the above plot, the random sample generated follows a normal distribution.

The application for the normal distribution is widespread in elementary statistics. Let’s look at some of its applications and understand how we handle them in R.

Assume that the test score of a college exam fits a normal distribution. Also, the mean test score is 72, and the standard deviation is 15.2. Determine the percentage of students scoring 84 or more in the exam?

Solution If we solve this by hand, then:

We then standardize this probability distribution as follows:

The solution value for this can be read from the standard normal table.

To solve this problem in R, we first need to know where on the normal pdf we want to compute the area from.

We are interested in the area below the curve from $Z = 0.789$. The following code helps to solve this problem:

This output means 21.51% chances for students scoring 84 or more in the exam.

Let’s look at a different scenario of application of the normal distribution.

Suppose that $IQ$s are normally distributed with a mean of 100 and a standard deviation of 15.

When we standardize this, we get:

We can still read this value from the standard normal table.

In R, we run the following code and get our problem solved:

To solve for (ii), first, let’s try to arrange our problem so that we can easily mimic the logic.

Since we are interested in the area between 110 and 125 below the pdf curve, we can express this as:

Now, let’s look at another type of continuous distribution.

To calculate the p-value of a Chi-Square, we use the pchisq() method. This method takes two parameters, the number of samples and the degree of freedom.

The pdf of the Student t distribution is of the form:

To obtain the tabulated t-values, one can use the command:

Where p is the probability and df is the degree of freedom.

The exponential distribution has a pdf of the form:

To generate values from this distribution, we use the rexp() function in R. This method takes two arguments, n for the number of samples we want to generate and $\frac{1}{\lambda}$, the rate of the exponential distribution.

For instance, suppose we want to generate at most five random variables from an exponential distribution is given $\lambda$ equals 3. The following code to carry out this task:

Now that we know how to generate random variables from the exponential distribution, let’s look at how to solve its probability problems in R.

Suppose the average checkout time of a cashier in supermarket cashier is 3 minutes. Determine the probability of a cashier completing a customer checkout in less than 2 minutes.

By hand, we would have solved this problem as follows:

Instead, in R, we only need to execute the following command.

These are the most popular continuous probability functions in R. We will look at the discrete distributions in the next section.

In this section, we will consider:

The binomial distribution is used in modelling the events that take binary values, that’s, True and False. The binomial probability mass function(pmf) is of the form:

The general command for generating random numbers from this distribution is:

n - is the number of observations that we need to generate. size - number of trials. prob - the probability of success in each trial.

Application of Binomial distribution Suppose that there are 12 multiple questions in an English question paper, and each question has five possible answers, and only one answer is correct.

To solve this problem, in R, we run the following command:

The pmf of a poisson is given by:

To generate random variables from this distribution, we use the command: rpois(n, lambda)

If 12 cars are crossing a bridge per minute on average, find the following:

In R, we run the command:

These are the main discrete distribution that is widely used in the application.

We have learned how we work probability distributions in R. We considered both the continuous and the discrete cases.

We generated random variables in both cases and solved some real-world problems using the R software.