This is because servers often receive many requests at a time; if the server was to be synchronous, requests would be processed one at a time which would lead to a bad user experience since the user might have to wait for a long time.

To follow this article along you will need the following:

Create a file named input.txt with the following text:

Then create a Javascript file named main.js and write the following code in it.

In the program above, we first import the built-in file system module. We then use the readFileSync method to read the file we created earlier.

This function is synchronous, thus blocks the thread. The console won’t output the result until the function is done reading the file.

Run the program through this command,

The program runs successfully and produces the following output;

What if the file had a very large amount of data that would take almost a minute or two to complete? Also, we might need to do some other tasks that do not depend on the output of the read file function.

In this case, waiting for the function to finish reading is not the best solution. It would be best to continue with the other tasks and come back to the function as soon as it is done computing.

This brings us to asynchronous functions.

This brings about a programming style known as parallelism. This is where two or more tasks are executed simultaneously hence the execution time depends on the longest running task.

Lets look at an example of an asynchronous function.

The file system module also gives us an asynchronous function to read a file. However, unlike the synchronous version, readFile does not return anything so we can not store the result.

Let’s use the text file we created earlier.

Replace the code in main.js file with the following code.

Notice that the console prints the program ended even though we have not acquired the result of the read file function. This is because the output can only be accessed at the callback function which we have not implemented yet.

Let’s head on to the callbacks now.

Replace the readFile function with the following.

The callback function that we have added receives two parameters, error and data. The error parameter becomes null when the file has been read successfully.

Therefore, we first check whether the error parameter contains any value. If true, the callback returns and prints an error in the console. Otherwise, the function prints out the content of the file.

You should see the following:

Notice that the program prints “Program ended” before printing the content of the file. This is because the asynchronous function takes some time to complete hence the next statement which prints the “program ended” finishes executing first.

As soon as the read file function finishes reading the file, the callback function is called and the necessary parameters are passed to it.

Async functions on the other hand give us a way of doing tasks in parallel thereby minimizing execution time. This intern makes servers run faster, providing a good user experience. Hope this gives you the information you need to get started. 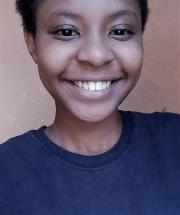 Monica Masae is a student at University of Nairobi. She is a self-taught programmer, with a great passion in web design and development.