In Artificial Neural Networks, we have not seen the concept of the multimodal neuron perception being used. We have only seen neurons responding to the same class of images because we train them as image classifiers.

Before you start reading about the use of multimodal neurons in artificial neural networks, it is crucial to understand what DeepDream, a computer vision program created by Google, entails. The idea behind DeepDream is to leverage Convolution Neural Networks (CNNs).

These CNNs produce dream-like hallucinogenic appearances by overprocessing images. This concept is demonstrated in the link provide in the example images. The next concept that is important to understand in the multimodal neuron model is using the CLIP model by OpenAI, a model which connects texts and images.

The CLIP model learns using a Contrastive Learning approach between image-text pairs. The goal is to make the model efficiently learn visual concepts from natural language supervision. Learn more about the contrastive learning approach on this article.

The human brain contains multimodal neurons. This discovery was made fifteen years ago by a team of researchers and was discussed in this paper. These neurons respond to different sensory inputs’ versatility, resulting in enhanced detection or identifying a unique stimulus.

In biology, we expect neurons that respond, not to specific individual words or features but abstract concepts. For example, biological neurons would respond to “Halle Berry” photos, drawings and sketches of Halle Berry, and texts of Halle Berry. In Artificial Neural Networks, we have not seen the concept of the multimodal neuron perception being used.

We have only seen neurons responding to the same class of images because we train them as image classifiers. Besides, these models do not generalize well to other modalities such as sketches and texts.

In the main paper, they present an overview of the different neurons that they find. They have gone through these neurons and have used their feature visualization technique previously used in their CLIP model, with every single one of them.

A few examples of the neurons they found include:

They found neurons that respond to the faces of specific persons. For example, the images below show content associated with Donald Trump, Lady Gaga, Ariana Grande, and Elvis Presley. Besides faces, these neurons could also respond to texts, architectures, poses, and logos associated with the same persons.

They found neurons that respond to words, facial expressions, and any content associated with an emotional or mental state. These emotional states include sadness, surprise, shock, crying, happiness, and sleepiness.

This example is shown below:

This has been demonstrated below:

This example is demonstrated below:

Overall, though it is not a perfect model (yet) as it experiences typographic attacks, I think this is exciting new research, and I’m excited to see where this goes. There are still many more categories of neurons they found in this paper.

I have only scratched the surface. Feel free to read more on not only these categories but multimodal neurons as a whole. You can also experiment with their different feature visualization techniques. 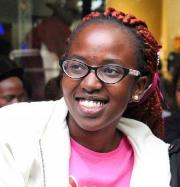 Wilkister is a master’s student studying computer science. She is passionate about technology and loves to code.