Appium is an automation testing tool that can be used to validate mobile browsers and mobile applications. This tool is widely used in mobile automation testing because it is free and can support both iOS and Android platforms. Mobile apps have become an important element in our lives because they provide us a smart way of doing things like shopping, paying bills, chatting, and booking flights.

Many mobile apps are constantly being developed to solve various real-life problems. Before these apps are commissioned for use, they are tested to validate their usability, quality, and functionality.

This article takes readers through Appium mobile automation testing tool and discusses its key features. It also provides an overview of Appium architecture and explains how it works.

Automation in testing increases the speed and accuracy of testing. It is an effective way of checking defects in new mobile applications.

This testing performs various aspects of testing such as usability, security, performance, quality, and functionality. It also tests the ability of a new application to interact with other applications.

This software has been limited to mobile application testing, with a specific focus on iOS, Firefox OS, and Android applications. Various programming languages are supported in Appium automation testing. These include Python, PHP, Java, and Perl.

Automation tests in Appium can be run on mobile devices, simulators, and emulators.

A simulator is an imitation of the condition and operation of an application. Similarly, an emulator is software or hardware that allows a computer system (host) to run applications designed for another system (guest).

The following are some of the main types of mobile apps that can be tested using Appium automation testing:

To use Appium, you need the following prerequisites:

Why is Appium widely used?

Appium is widely used because of its unique features and the certain benefits it offers mobile app developers. The main features that make developers choose Appium over other mobile automation testing tools are:

Appium is also chosen by testers and developers because it offers the following additional benefits:

The following diagram shows the architecture of Appium: 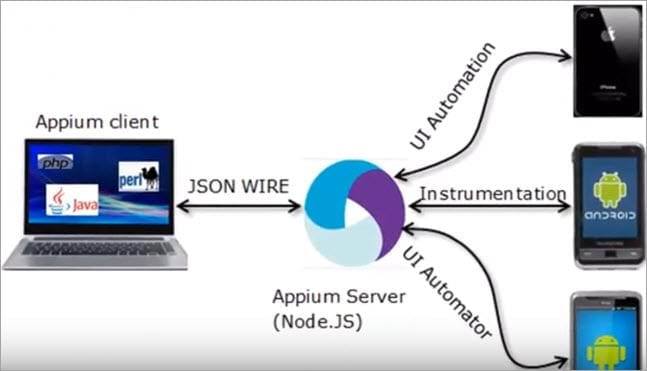 This is an HTTP server that receives command requests (HTTP requests) from the client component (in JSON format). This server uses a Node.js server. The commands are then executed on mobile devices.

This component should be installed on the computer before scripting the automation code. The Appium server acts as an intermediary between the Appium Client and the end device. It is connected to platforms such as iOS, Android, and Windows.

This refers to an emulator or a mobile device that is connected to the Appium server. The test cases are executed on this device.

How does Appium work?

Appium works using the three main components of its architecture (client, server, and end device). When this tool is installed on your computer, it sets up an HTTP server that generates a REST API to enhance communication with the client.

The XCUI test allows users to write tests on iOS using Objective-C or Swift. The UI Automator is an Android testing framework that builds user interface (UI) tests using APIs. After the requests have been executed, the Appium server provides HTTP responses to the client.

Appium works differently on iOS and Android. Let’s look at how it works on these two platforms.

How does Appium work on Android?

The following is a brief sequence of how Appium works on the Android platform:

How does Appium work on iOS?

The following steps show how Appium works on the iOS platform:

In this article, we have learned about mobile automation testing with Appium.