Daniel is an ambitious and creative statistician pursuing his degree in Applied Statistics at Jommo Kenyatta University of Agriculture and Technology, Juja, Kenya. He is passionate about building tech products that inspire and make space for human creativity to flourish.

Getting started with Linear Regression in R

The R language is mainly used for statistical and data analytics. It’s also used in developing machine learning applications. In this article we will talk about linear regression and how to implement it using R.

In this tutorial, we will explore an introductory theory behind linear regression and learn how to perform, interpret and evaluate its accuracy in R.

Linear regression is a modeling technique that is used for predictive analysis of continuous variables such as sales and product price. It shows the existence linear relationship between two variables.

The relationship between one explanatory variable X and one study variable Y is explained using simple linear regression.

This is a linear regression that explains the relationship between two or more explanatory variables (X) and one study variable (y).

It is mathematically presented as:

This error arises when some of the observations do not fall on the regression line. Even if it is not possible to get rid of the error term, we have to minimize it as low as possible.

Using the technique of Least Squares, we find the values of β0 and β1 which give a regression line with a minimum sum of squared error.

There are some cases where X increases and y remains the same. This means the correlation between the two variables is zero.

Least Square is a technique that is used to estimate unknown parameters, β0 and β1 by minimizing the sum of squares of the vertical difference between the observations (y) and the predicted values (ŷ).

The approach minimizes the sum of squares:

First, let’s install all the required packages together by running the code below:

In our case, we shall use a dataset called marketing. This dataset is available in the datarium package we have already installed in the Rstudio.

The marketing dataset has data about the influence of three advertising media on sales. Those media are YouTube, Facebook, and the newspaper.

The dataset has 200 observations and 4 columns. The first 3 columns show the advertising budget in thousand dollars with the fourth column showing sales recorded.

We load our data as shown below.

To check out the size of our dataset:

Since our data is now loaded, it’s important to understand some of its properties. We begin by using the head() function to display a sample of our dataset.

We can also use the summary() function to look at the basic statistics of our dataset, as shown below.

Since we are interested in building a linear regression that shows how sales vary with an advertising budget, we need to have a look at the trend of all three advertising media.

This is as shown below. 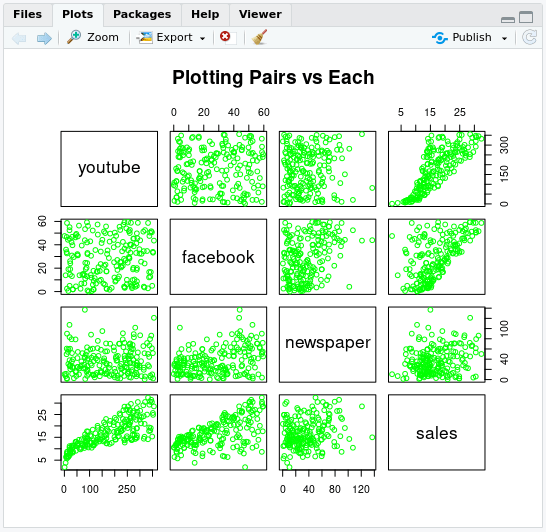 The last row of our plots shows a linear relationship between sales and advertising channels (YouTube and Facebook). This means the Youtube and Facebook advertisement budgets have a positive linear impact on sales. However, the newspaper in the third plot shows no particular trend with sales.

Step 3: Preparing our data for the model

Most of the data we have come across are not clean and therefore requires us to do some work on them before we can use them in building our prediction model.

If we don’t clean up the data, we end up creating a model that is not significant for prediction purposes. Let’s start by checking if our data contains outliers.

To achieve this we run the code below. 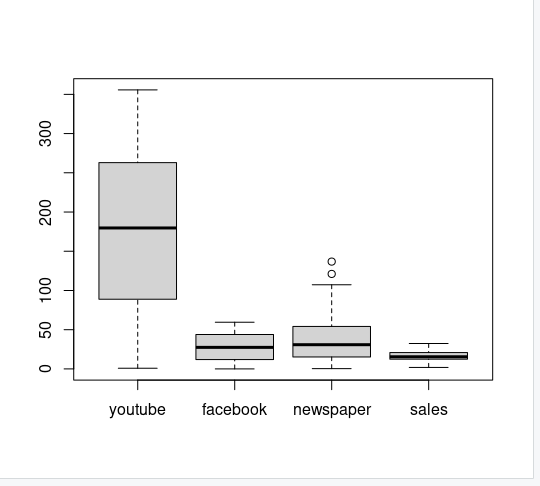 As we can see, newspaper is the only advertising media that reports presence of outliers (values that are far away from the majority of data distribution). We need to remember (as we saw in step 2), the linearity assumption does not hold between newspaper and sales.

Therefore, the newspaper is not one of the variables explaining the change in sales. We, therefore, eliminate it from our model otherwise it will be noise to the model. Our variables of interest, that’s, YouTube and Facebook channels are free of outliers.

The output is FALSE for all values in our dataset. This means that our data has no missing values.

For our case, we shall use a splitting ratio of 75%:

When creating our model, we use the lm() function.

To obtain our model properties, we pass it to the summary() function. ie: 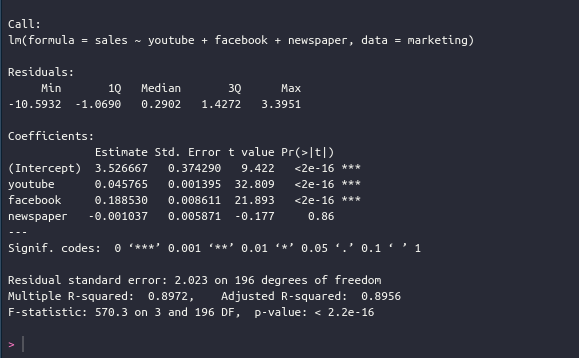 First, we start by examining whether our model is significant or not. We consider the F-statistics and the associated p-value at the bottom of the model summary. If the p-value is utmost 0.05 then the model is statistically significant.

Our model, with a p-value < 2.2e-16 which is a small value compared to the benchmark p-value < 0.05. This shows that at least one of the three explanatory variables in our model is significant to the model.

From the estimate column, it’s seen that the change in YouTube and Facebook advertising budget has a positive impact on the sales. For example, spending 1 dollar on YouTube advertisement will lead to a 0.001395 increase in sales units.

This value is negligible and therefore the newspaper has no significant influence on sales.

Since newspaper advertisement is not significant to our model, we remove it from the model.

This gives our final model as:

Step 6. Analyzing the accuracy of our model

Now that we have our model, let’s test how good it is. To do this, we shall use our test set that we splitted apart in step 3 and use our model to predict sales values for those data points.

Because we have the actual sales values for the same points, we shall compare them and see how our model performs:

Running the code above, we get the graph below. 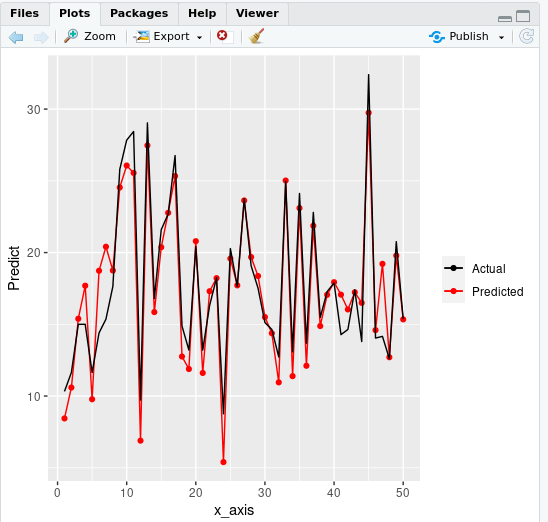 The black points in the graph above are the plots of the actual sales of our test set, while the red ones are predicted sales of the same dataset predicted using our model.

Comparing the two plots, it’s clear how our actual values (black) and the predicted values (red) are close to each other. This indicates that our model is good.

Since this is just a qualitative way of evaluating the performance of our model, we need to find a statistical value that tells us how accurate our model is.

To achieve this, we use the following metrics:

It turns out, the R-Squared error for our model is 0.8813498 which is a higher value in the range of 0 to 1. The higher value of the R-squared indicates that the model is adequate.

Now that we have made it to the end of our study, we need to understand that linear regression is an important model in the world of prediction analysis and therefore it needs to be made as accurate as possible.