Kernel SVMs are a class of Support Vector Machines (SVMs) that use kernel functions to classify data.

It is a generalization technique of the linear SVM on nonlinear data. Indeep, the Kernel SVM offers more flexibility when dealing with a linearly inseparable classification task.

For learners to benefit most from this material, they should be comfortable working with the scikit learn library in python.

You will also need basic knowledge of the linear SVM.

Getting started with Kernel SVM

Before understanding how this algorithm works, we need to revisit the two linear SVM versions.

An example of a Hard Support Vector Machine is shown below. 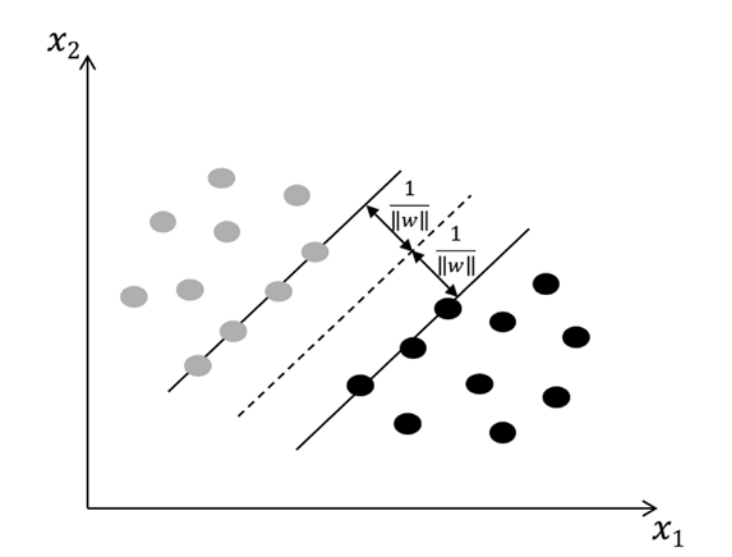 As we can see, there is no misclassification in this case.

An example of Soft SVM is shown in the figure below. 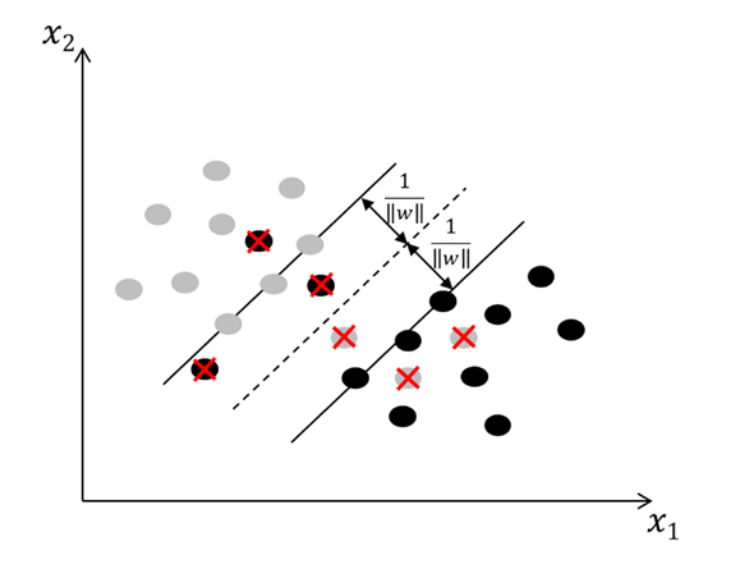 As we can see, there is minor misclassification in the case of soft SVM. 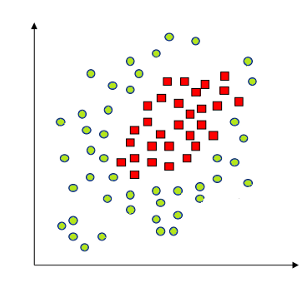 In this kind of problem, we say data is linearly inseparable. Regardless of how we fit linear decision boundaries to the data, the model’s accuracy can only be less than 50%. Thus, we cannot use linear SVM to solve this problem.

In such a problem, the Kernelized form of the Support Vector Machine comes into play. So let us now look at kernel SVMs in detail.

As we saw in the non-linear scatter plot above, it is impossible to classify data points using a linear hyperplane.

However, if we transform the data from two-dimensional to three-dimensional, we obtain a plot similar to the figure below. 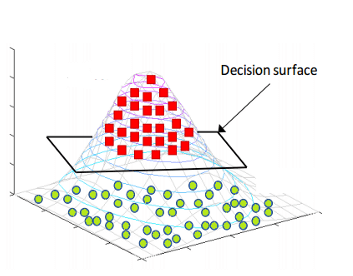 As we can see in the above plot, transforming the data is now linearly separable, and we can classify it using a linear hyperplane.

Since we mapped our data from two to three dimensions, the decision boundary that optimally classifies our data is a plane.

Most non-linear datasets are usually in high dimensional space in the real-world scenario. Mapping these features further to higher dimensional(kernel space) can result in even theoretically infinite-dimensional feature space.

As a result, the processing time and power required on this kernel space are very high, making this approach inefficient.

Therefore, we employ a technique known as the kernel trick to make things less complex. This technique enables us to work in the input space without visiting the kernel space.

Let us understand the intuition behind the kernel trick.

As we already stated, the Kernel trick is a technique that enables us to work in the input space of the data without projecting it to a higher dimensional space.

Instead, it classifies data inputs in the input space as if they were in high dimensional space that we could have achieved through transforming the data.

For instance, suppose we have two vectors, i.e.,

Suppose we map these vectors to higher dimensional space as follows.

Where: The $\phi (x_i)$) and $\phi (x_j)$ are two points we obtained through transforming data to a higher dimension.

To do this, we take the dot product of these two $\phi$ vectors as shown below.

Suppose we deal with a dataset with hundreds or even thousands of features. Transforming the data and carrying out computations in the same manner as above could be very inefficient.

This approach is time-consuming and requires high processing power. Therefore, we need to develop a more efficient way to carry out the desired computations efficiently. The solution to this challenge is the kernel trick.

The good thing with the kernel trick is that we need not transform our data inputs to learn the relationship in their high dimensional space.

The formula below shows how the kernel trick utilizes the original data inputs to obtain the same result we would have achieved by first transforming the data to higher dimensions.

So, with the kernel, we do not need to transform the data to learn the relationship in their high dimensional space.

Let us demonstrate this using a simple example.

Suppose we have a dataset with two features such that:

Here, we first map our vectors to higher-dimensional space, as shown below.

Computing the distance between our two new vectors in high dimensions.

With the kernelized version, we utilized the original dimension of the data. As a result, we obtained the same answer as the first approach, very first and with fewer computations.

This is the basic intuition behind how the kernel trick works. It only utilizes the original data inputs and does wonder.

In practice, we can utilize many types of kernel methods depending on the task convenience.

The Gaussian RBF kernel formula is given as follows.

Where $\sigma^2$ is the deviation of the Gaussian distribution, and $\vec l^i$ is considered as a landmark.

The landmark is usually located at point $(0,0)$. Vector $\vec x$ represents any possible point we can choose on the x and y-axis.

Using the Euclidean distance, the numerator, $x-l^i$, tries to capture the distance between the chosen point $\vec x$ and the landmark $\vec l^i$.

We have a $\sigma^2$ value on the denominator. This value is responsible for the steepness of the curve.

Various types of kernels functions can deal with non-linear classification problems. However, in this session, we shall utilize the Gaussian RBF kernel as our kernel function.

The first thing we shall do is to import the dataset and clean it up before we can implement our model. We can download this dataset here.

To split our data, let us execute the following lines of code.

Here we scale our features so that once with great values, they do not dominate the ones with small values.

Let us run the code below in our workspace.

Step 5: Fitting the Kernel SVM to the training set

Since our data is now ready to use, let’s now fit our model on the training set.

The above syntax trains the model.

Now let us try to use our model and predict the test set.

Upon executing this code, let us proceed and evaluate our model performance on predicting the test set using a confusion matrix.

Let us run the code below.

The above code yield the following confusion matrix.

Our model was able to classify 93% of our data points correctly. This performance score is excellent. Thus kernel SVM classified our data appropriately.

This tutorial revisited the SVM algorithm and showed when it’s suitable for classification and when it’s not. Therefore, the kernelized version was the best approach to the problem.

First, we discussed how the kernel trick works. Then, with a visual example, we demonstrated why going for it, rather than working with higher dimensions, is an efficient approach to the problem.

Now that we looked at only one kernel type, we can check with the reference section below and widen our understanding of the other kernel functions used in machine learning.