Carol is a software developer and data engineer. She loves writing code and tech tutorials.

Is Golang the Best Fit for Embedded Systems?

An embedded system combines hardware and software to perform specific functions, usually within a larger system. Industrial machines, automobiles, cameras, airplanes, and vending machines are some of the possible use cases of an embedded system.

Embedded systems are programmable and utilize languages like C, C++, Python, and Java. In the recent past, there have been numerous suggestions about using Golang as the primary language in embedded systems.

Golang is a relatively new programming language whose popularity has risen rapidly.

The needs of embedded systems are quite different from those of a traditional computer-based system.

We’ll discuss each of these requirements in detail, starting with performance:

An embedded system requires a stable or conducive operating environment.

An example of performance requirements includes a factor such as energy management (power consumption, battery life, and recharge time).

These provisions ensure that a firm or individual can anticipate the effects of sudden voltage drops or degraded hardware components over time.

These internal requirements influence how external parties assess the performance of an embedded system.

The requirements also allow developers to predict the consumption of various resources. As a result, firms can provide adequate reserves for unexpected operating conditions.

Such systems should have no room for failure. For instance, pacemakers should deliver stable performance. This is because a slight deviation puts an individual’s life at risk.

Embedded systems should be safe. Organizations must perform a hazard analysis on their production systems to avoid presenting risks to the users.

In real-time systems, such as those in autonomous cars, safety is a key factor because serious injuries are a common occurrence.

A fault tree analysis is critical in assessing the root cause of safety threats in an embedded system. The safety requirements should determine the system risks and the potential solutions.

The security of embedded systems is important due to the rising cases of cyber-attacks. These security issues can disrupt critical functions in embedded systems. For instance, they can disable power plants and interfere with automatic vehicles.

Many embedded systems include a human-computer interface which makes them usable. These interfaces must consider various requirements to provide the best user experience.

For instance, display screens for devices should accommodate changing lighting situations. Embedded systems can also have multiple options for navigation to cater to the needs of people living with a disability.

Why does Golang fit?

According to the Stack Overflow 2021 survey, Golang is one of the top languages among developers. 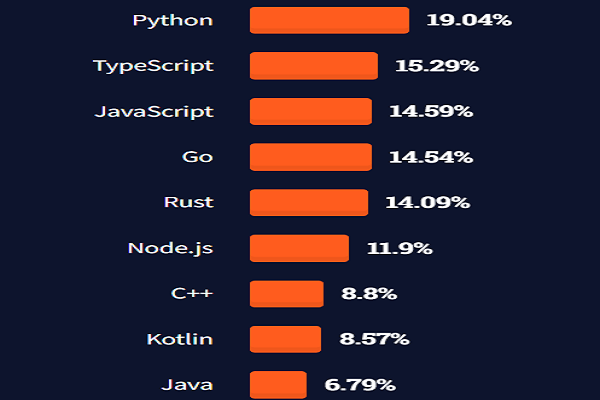 Some of the reasons why Golang is perfect for building embedded systems include:

GO vs C for embedded systems

In this section, we’ll have a look at how Golang supports I/O management, memory management, concurrency, and compilation.

Based on these factors, we will then contrast Go’s performance to C’s - another popular language for building embedded systems.

Golang has an I/O reader that blocks the read method when accessing a file descriptor or the TCP. The read method is blocked until data arrives or the stream closes.

In contrast, C language allows the monitoring of multiple streams simultaneously until at least one of them is readable.

On the other hand, the C language relies on manual memory management. Here, developers rely on functions such as malloc to write an object to memory. In C, programmers have greater control over memory usage.

Concurrency refers to an application’s ability to deal with numerous tasks simultaneously while communicating with other programs. Golang is a highly efficient concurrent programming language.

C language also supports some concurrency. However, it is less efficient when compared to Golang.

Compile-time is critical when evaluating the speed at which programming code is converted to machine code.

Golang has a higher compile time than C. This is because Golang is simple to use and has a more readable syntax. C is known for its slow coding speed and compile time.

Despite its many benefits, Golang has some limitations. They include:

Developers prefer to write code that they can reuse in the future to save on the time and effort of having to rewrite new code.

Furthermore, they may wish to retain some generic code for various embedded systems for safety reasons.

Since Golang does not support this feature, its use in embedded systems is somehow limited.

In software development, extensibility involves leaving some room for future growth. Golang does not support this type of feature.

This makes it challenging to change keywords in built-in data structures. Golang provides little to no allowance for modifying existing embedded systems which hinders future upgrades.

Golang lacks manual memory management and instead relies on automation. Though automation enhances development, it has its downsides.

They are common in small devices like smartphones, and fitness trackers, as well as in large projects, such as railroad systems. Embedded systems rely on C, C++, Python, and Java programming languages.

Golang is increasingly becoming a popular programming language for embedded systems. This is due to its core language features, lower compile-time, TCP packages, high concurrency, and efficient memory management.

Golang appears to be an excellent fit for embedded systems and could overtake primary languages in the future.