Inversion of Control (IoC) is a software design principle that helps reverse control in object-oriented programming. Control here is any extra responsibility a class has besides its primary responsibility.

Imagine this, suppose you have a bakery that specializes in making egg rolls. What is an egg roll without an egg? So eggs are essential in the making of egg rolls. Why egg rolls, you may ask? Well, you could call it plain nepotism.

So how do we get a bakery that obeys the IoC principle? Well, rather than having a poultry farm and involving yourself with all the poultry-related tasks, you order the eggs and get them delivered to you. This time, you don’t have to worry about the chicks and the eggs being healthy or using suitable animal feed. With this new design, you can focus on making egg rolls, which results in a more effective baking process.

This is the big idea behind IoC: separating concerns. Inversion of control makes it possible for a consumer to have more control over the software. It gives it more flexibility and freedom to choose from other options.

Before we begin, you should have:

Some benefits of using IoC

Before we look at some code, here are some things you should have in mind:

Coupling is a measure of how closely bound software modules are to one another. It is the degree to which changes made to a component force a need for a change in other components or modules.

Code fragility is the likelihood that software will break in many places every time there is a change.

Code rigidity is the degree of difficulty in making changes to the software.

When you call something abstract, it means that it is incomplete or not clearly defined. Abstraction is a programming approach that hides implementation details, revealing only the functionality (relevant operations) to the user. It is one of the basic concepts in object-oriented programming.

This principle states that every function, class, or module should have a single reason to change and have only one responsibility.

The Dependency Inversion Principle (DIP) enables us to create loosely coupled systems. Making them easy to change and maintain.

High-Level modules are modules written to solve problems and use cases. They are abstract and a map to the business domain(business logic). Their concern is with what the software should do and not how they should do it.

Low-Level Modules are implementation details required to execute the business policies (logic). They are the plumbing or internals of a system, and they tell us how the system(software) should do various tasks. They tend to be very concrete. 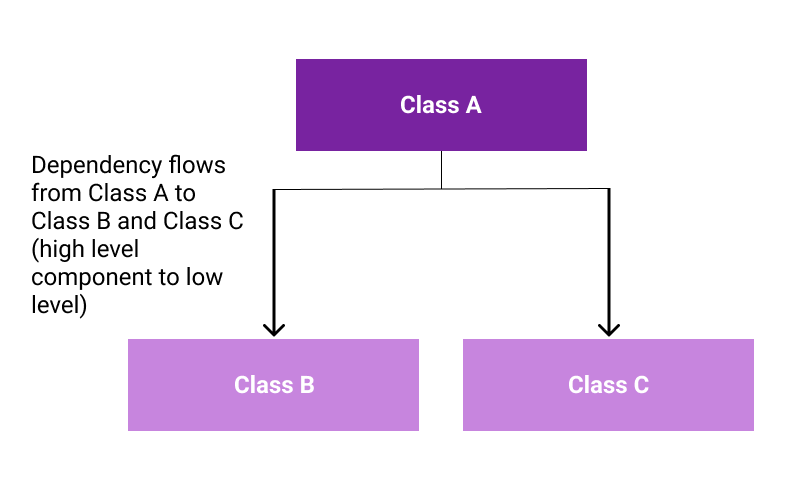 To make this code obey the DIP principle, extract the interface for the low-level modules. Extracting the interface will give us something that looks like this: 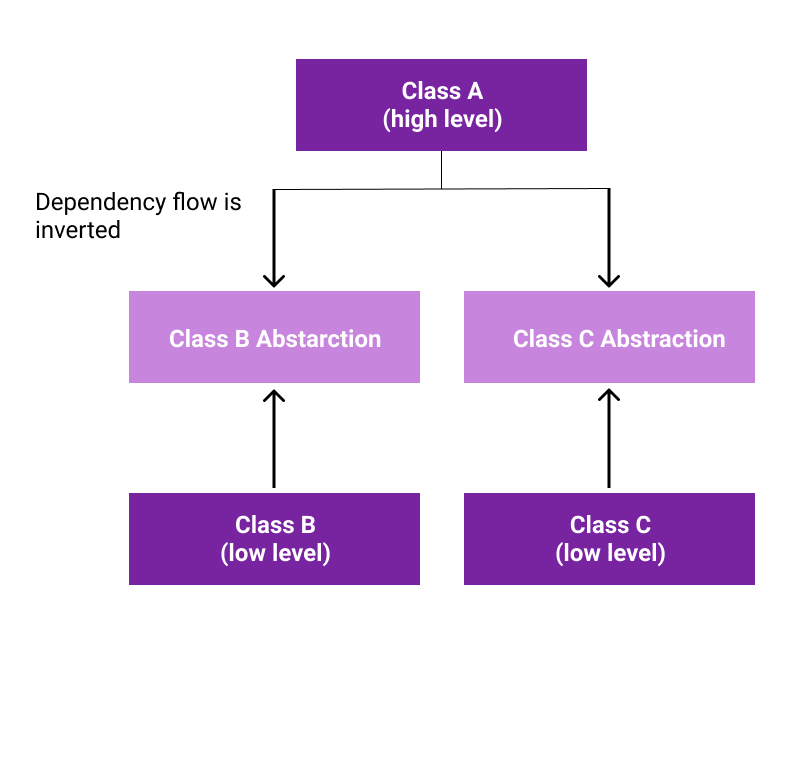 This abstraction could be an interface or an abstract class. Now we can head back to the main focus—Inversion of Control.

Inversion of control only provides design guidelines and not implementation details. A design principle is not constricted to any programming language. You can implement it whichever way you please. However, design patterns recommend an actual implementation. Design patterns are more like reusable solutions to a problem in a given scenario.

Thus, we can apply IoC in object-oriented programming in many ways. Some of which are:

Dependency Injection(DI) is a design pattern primarily used with the Dependency Inversion Principle. It makes it possible for dependent objects to be created outside of a class. It then provides those objects to the class.

For example, we have a class LoginManager that depends on the implementation of UserRepository.

There are a couple of ways to fix this:

LoginManager is no longer responsible for creating its dependencies. It is now the caller’s job in this case—the main function. The main function provides the required dependency, which is UserRepositoryImpl. This way, we can have different implementations of LoginManager and quickly test it in other contexts. 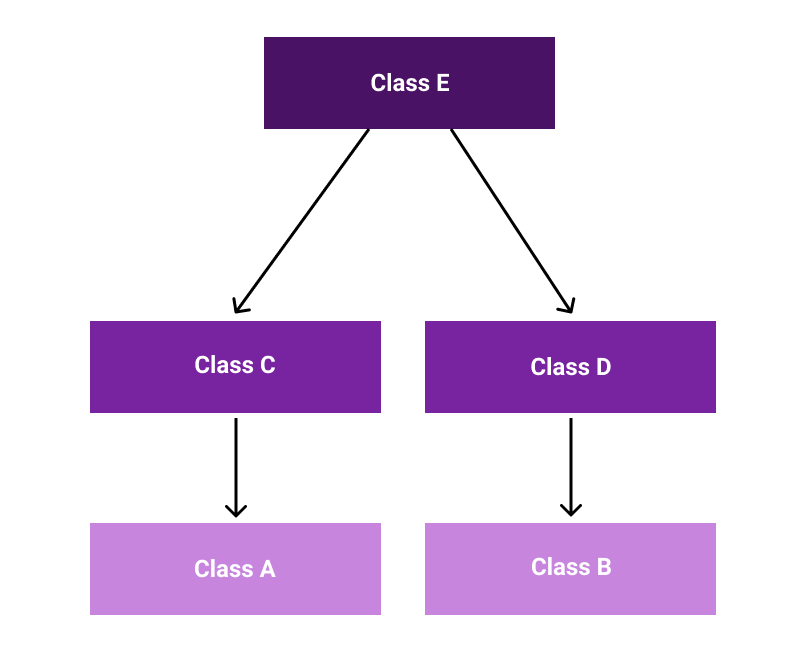 Whew! Right? This is a simple example with just five classes. Imagine what would happen with real-life projects. There could be hundreds of classes that have to be instantiated every single time. That would be a whopping load of redundant work. Dependency injection is a great technique needed for achieving loosely coupled classes. But we can see here that manually doing dependency injection is not such a good idea.

Also, if you want to consider the lifecycle of these objects, supposing you want Class C to be a singleton and create D on every request. Handling this request manually would involve a lot of logic and redundant codes. This is where manual dependency injection comes in. With manual DI, you can create your own dependencies container class. This container will house your application’s dependencies.

The IoC or DI Container now controls the creation and lifecycle of the objects. This way, you don’t have to create instances of these objects every single time you need them anymore. Dagger and hilt can automate this process and generate the necessary code for you.

IoC Containers are primarily used in an application for objects like:

It would be best not to create instances of entities, data transfer, or value objects in containers. You can always create new instances of them when needed, which is okay from an architectural point of view.

A strategy pattern is a behavioral design pattern. It makes it possible to change the behavior of a class or its algorithm at run time.

Assuming we have an interface called LaundryBot, it will have methods for washing, drying, and folding. Different fabric types will use this interface. An example is the CashmereLaundryBot and SilkLaundryBot used for laundering cashmere and silk.

We should have in mind that:

We said an item could either be hand or machine washed and either sun-dried or dried using a dryer (machine dried), meaning that any LaundryBot class would have either of these methods hence if we have a DenimLaundryBot, and a CottonLaundryBot they would both have the same piece of code for their wash and dry implementations of LaundryBot. This is because both denim and cotton will be machine washed and machine dried.

How do we take care of this code duplication?

Now, this is where the strategy pattern comes in. The Strategy pattern encapsulates a set of algorithms that are interchangeable at runtime. How do we implement this in LaundryBot? To do this, we would remove the Wash() and dry() methods from the LaundryBot interface. We would then make them interfaces called Wash and Dry. These interfaces would have methods Wash() and dry() respectively.

Next, we provide concrete implementations of these interfaces. This way, we can encapsulate the different behaviors for each case of wash and dry. To do this, create classes called MachineWash and HandWash that inherit from wash. In the same way, MachineDry and SunDry will inherit from Dry.

We have successfully created a family of algorithms for wash and dry. 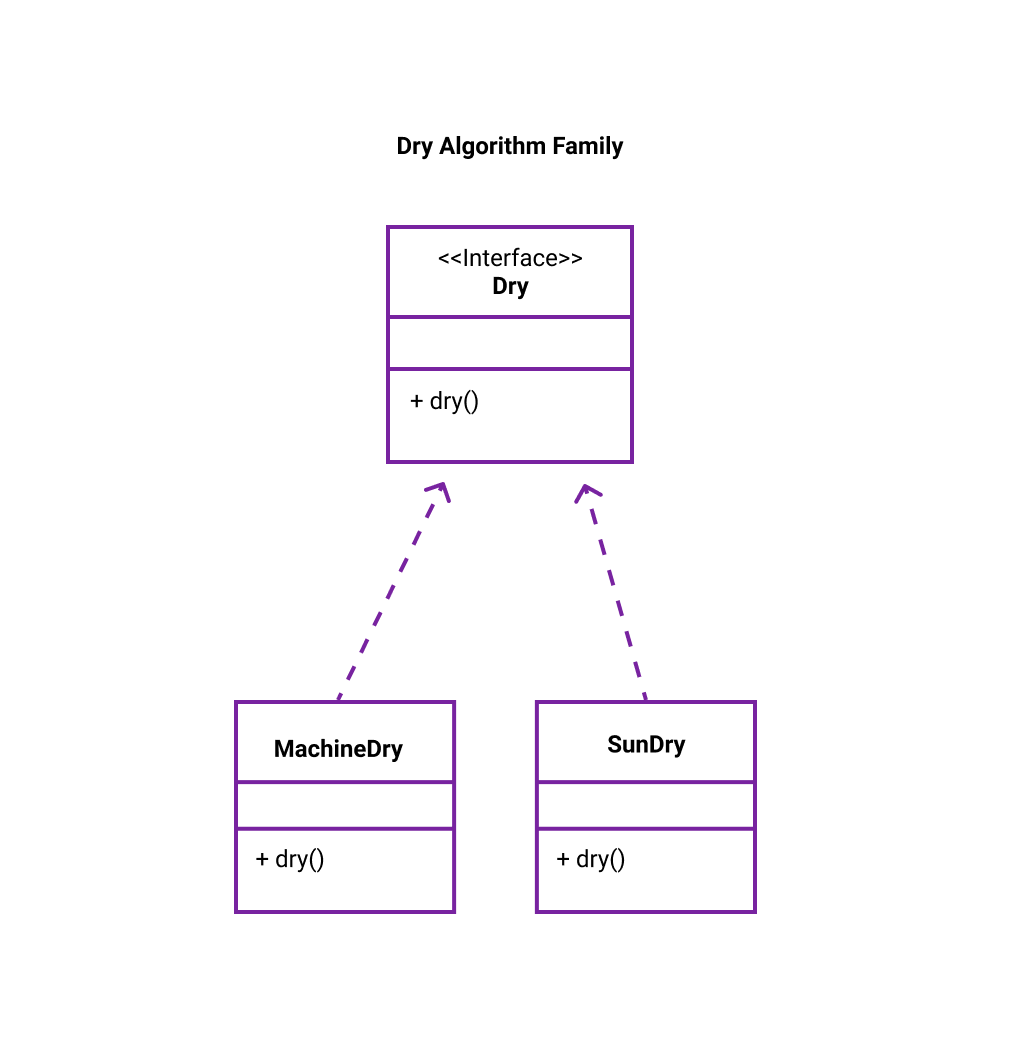 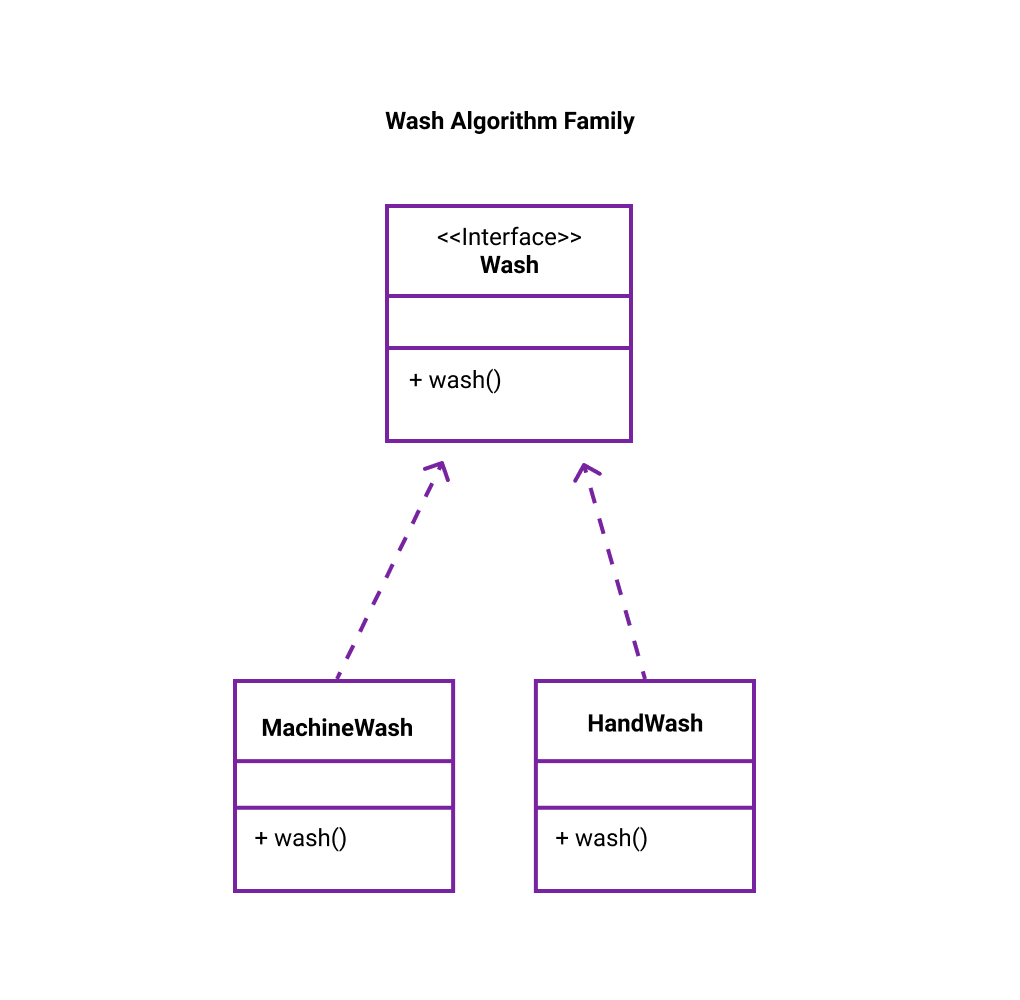 We have created strategies; now, it’s time for us to see how it works. Remember, we removed the Wash() and dry() methods from the LaundryBot interface. This time, rather than having Wash() and dry(), we would create fields of type Wash and Dry.

This way, any class inherits from LaundryBot can choose the particular behavior it wants from the algorithm family. Let’s see how this works. Say we want to create a CashmereLaundryBot. What behaviors of Wash and Dry do we choose? It is advised to wash cashmere by hand to avoid tears and snags; thus, we would use the HandWash behavior.

For drying, cashmere isn’t suitable for MachineDry because the heat could shrink or damage its follicles. The Dry behavior to use for a cashmere then is the SunDry. Let’s see how this looks like in code:

See how the strategy pattern has made it easy to change the behavior of this class? Nice!

Inversion of control is a practical approach to improving code modularity, reducing code duplication, and simplifying testing. Although it is beneficial when developing reusable libraries, it is not appropriate in all use cases.

It is essential to know when to take advantage of the flexibility and freedom inversion of control and when not to. It’s been a long article, but I sure hope this will help you as much as it helped me. 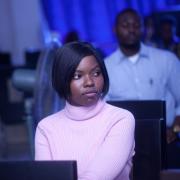 Love Otudor is a Mobile app developer and Technical Writer, passionate about contributing to the growth of communities and empowering more women in tech. She has a personal blog where she breaks down complicated concepts in software engineering into simple edible pieces for beginners.