This article will serve as an introduction to Reinforcement Learning (RL). According to Wikipedia, RL is a sub-field of Machine Learning (ML). That is concerned with how agents take actions in an environment to maximize a cumulative reward.

There are two main prerequisites a reader would need before diving into this article:

In RL we have key concepts or terms that we need to define. These include agents, state, action, rewards, and the environment.

In Reinforcement Learning (RL), agents are trained to maximize total rewards. This is because an RL agent is given rewards for all the correct moves it makes and punished for the wrong moves. This results in the agent trying to maximize the right moves while minimizing the wrong moves.

RL programs learn to map situations to an action taken in order to maximize those rewards. This guides the agent by finding the (best) actions leading to the most rewards.

Let’s consider a simple problem of a child learning to walk. This example will help us better understand reinforcement learning and its key concepts.

In our scenario, the child is an agent. Our environment is the ground on which the child walks on. By taking an action, in this case, walking, the child tries to move from one state to another step by step. The child gets a reward (let’s say a muffin) after taking a defined number of steps (task). The reward isn’t awarded (given) to the child when it’s not able to walk(that said number of steps) or perform the task well.

This is a simple example of a reinforcement learning problem.

There are a couple of popular RL algorithms used in solving problems today. They include Q-learning, Policy Gradients (PG), and Actor-Critics.

We will be going through these algorithms in a bit more depth.

Q-learning is the most popular among the RL algorithms.

This algorithm finds an optimal action-selection policy by using a Q-function. By selecting the best of all possible actions, the algorithm can maximize the value function, Q.

The Q-function takes in the state (s) and action (a) as its inputs.

The Q-table stores the resulting Q values obtained from the output of the Q-function.

The first action performed by the agent is completely randomized. This is because the Q-values are set to zero in the beginning.

Values in the Q-table are then updated for each state-action pair. The process continues until the function Q converges to Q new.

Discount factor, usually denoted by the gamma parameter, this is a real value ranging from 0 to 1. This value indicates how important future rewards are to the current state.

If the discount factor is set to 0.1, the agent will only learn about actions that produce immediate rewards. But, setting it to 0.9 will prompt the agent to check each of its actions based on the sum total of all its future rewards.

Learning rate (LR) is also referred to as the step size. It determines how much new information it accepts over the old information.

There is a need to balance the agent’s exploration and exploitation efforts. This is because the agent must take random actions to bring greater returns in the long run.

Without this balance, the agent might opt for an immediate reward every time. The epsilon-greedy algorithm achieves this balance. The agent will exploit the knowledge it has already gathered instead of exploring.

That’s Q-learning in a nutshell.

Alongside Q-learning, the Policy Gradient method is another type of a reinforcement learning technique.

This technique works in the following ways:

It’s as simple as that.

They are of two types:

Stochastic Policy Gradients (SPG) They integrate over both the state and action spaces.

Deterministic Policy Gradients (DPG) They integrate over only the state spaces.

Due to these differences, SPG may need more samples to compute in cases of high dimensions action spaces. 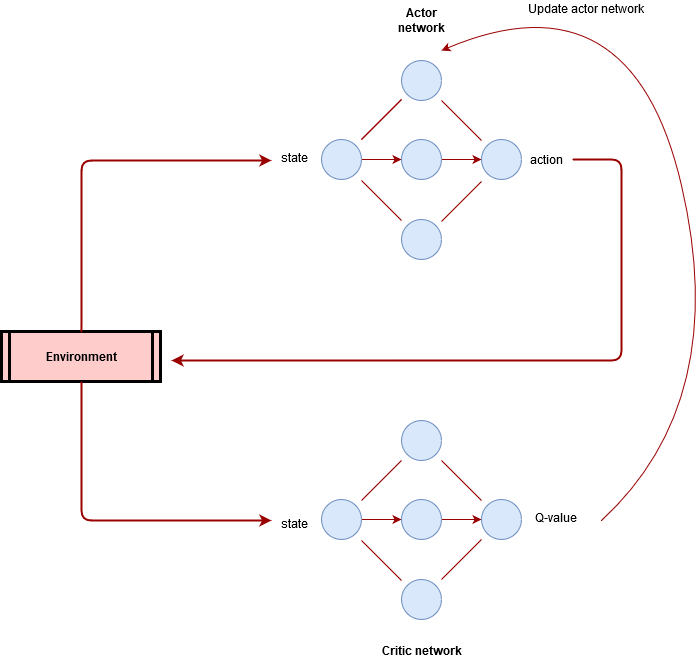 The Actor-Critics (AC) method consists of two separate models as shown above:

Actor: The actor model takes in the current environment state, determines and outputs the desired action.

Critic: It takes plays the evaluation role. It takes in the environment state and the action (from the actor model) returning a score that tells us how good the action is for the state.

This returned score is the Q-value.

This is the idea behind Actor Critics models.

Let’s consider an example that demonstrates the actor-critic network.

Let’s take the examples of a child playing in the backyard with the parent monitoring the child. The child is playing, running around exploring all options in this environment.

The child can play in the dirt, ride the swing, play with water, etc. The role the parent plays is to watch the child and either criticize or reward its actions. Always taking the environment into account.

Some typical use cases of AC models are in the fields of biology and psychology.

The use of AI in computer games has been on the increase over the past couple of years.

In 2016, Deepmind Technologies built AlphaGo. An RL controlled computer program that plays the board game, Go (an ancient Chinese board game).

The computer program was able to beat Lee Sedol, a human professional Go champion 4-1 in a 5 match game.

Later versions of AlphaGo such as AlphaGo Zero and MuZero became even more powerful. They were completely self-taught using RL. This was significant as they were learning to play games without being taught the game rules.

For a deeper understanding of the AlphaGo story, watch a full documentary here.

In the robotics industries, RL-controlled robots are used to perform various tasks.

For example, at Google’s DeepMind, they developed an AI-powered recommendation system. This system was meant to improve the energy efficiency of its data center.

An AI robot was given control over their data center in order to manage part of its cooling infrastructure.

The AI robots exploit the RL technique, a similar approach to that used in AlphaGo, AlphaGo Zero, and MuZero. This is by learning through trial and error.

The algorithm works by:

The use of AI robots in their data center led to a decrease in energy spending by up to 40%.

Another great example is IBM’s financial trading platform which uses an RL agent for trading. It computes a reward based on the profit or losses made in every financial transaction.