A random forest is a supervised machine learning algorithm that is constructed from decision tree algorithms. This algorithm is applied in various industries such as banking and e-commerce to predict behavior and outcomes.

This article provides an overview of the random forest algorithm and how it works. The article will present the algorithm’s features and how it is employed in real-life applications. It also points out the advantages and disadvantages of this algorithm.

What is a random forest?

A random forest is a machine learning technique that’s used to solve regression and classification problems. It utilizes ensemble learning, which is a technique that combines many classifiers to provide solutions to complex problems.

The (random forest) algorithm establishes the outcome based on the predictions of the decision trees. It predicts by taking the average or mean of the output from various trees. Increasing the number of trees increases the precision of the outcome.

A random forest eradicates the limitations of a decision tree algorithm. It reduces the overfitting of datasets and increases precision. It generates predictions without requiring many configurations in packages (like scikit-learn).

Features of a Random Forest Algorithm

A decision tree consists of three components: decision nodes, leaf nodes, and a root node. A decision tree algorithm divides a training dataset into branches, which further segregate into other branches. This sequence continues until a leaf node is attained. The leaf node cannot be segregated further.

The nodes in the decision tree represent attributes that are used for predicting the outcome. Decision nodes provide a link to the leaves. The following diagram shows the three types of nodes in a decision tree. 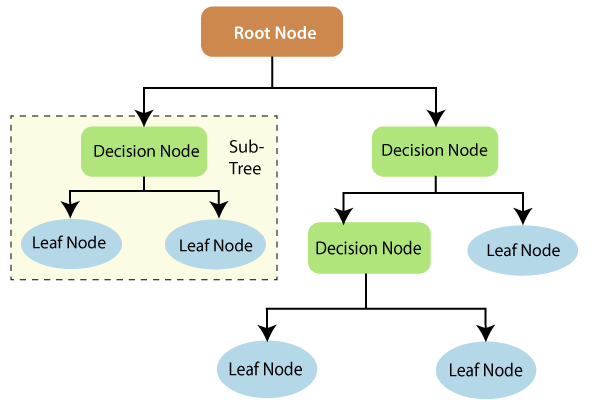 Entropy is a metric for calculating uncertainty. Information gain is a measure of how uncertainty in the target variable is reduced, given a set of independent variables.

Let’s take a simple example of how a decision tree works. Suppose we want to predict if a customer will purchase a mobile phone or not. The features of the phone form the basis of his decision. This analysis can be presented in a decision tree diagram.

The root node and decision nodes of the decision represent the features of the phone mentioned above. The leaf node represents the final output, either buying or not buying. The main features that determine the choice include the price, internal storage, and Random Access Memory (RAM). The decision tree will appear as follows.

The main difference between the decision tree algorithm and the random forest algorithm is that establishing root nodes and segregating nodes is done randomly in the latter. The random forest employs the bagging method to generate the required prediction.

Bagging involves using different samples of data (training data) rather than just one sample. A training dataset comprises observations and features that are used for making predictions. The decision trees produce different outputs, depending on the training data fed to the random forest algorithm. These outputs will be ranked, and the highest will be selected as the final output.

Our first example can still be used to explain how random forests work. Instead of having a single decision tree, the random forest will have many decision trees. Let’s assume we have only four decision trees. In this case, the training data comprising the phone’s observations and features will be divided into four root nodes.

The root nodes could represent four features that could influence the customer’s choice (price, internal storage, camera, and RAM). The random forest will split the nodes by selecting features randomly. The final prediction will be selected based on the outcome of the four trees.

The outcome chosen by most decision trees will be the final choice. If three trees predict buying, and one tree predicts not buying, then the final prediction will be buying. In this case, it’s predicted that the customer will buy the phone.

Classification in random forests employs an ensemble methodology to attain the outcome. The training data is fed to train various decision trees. This dataset consists of observations and features that will be selected randomly during the splitting of nodes. 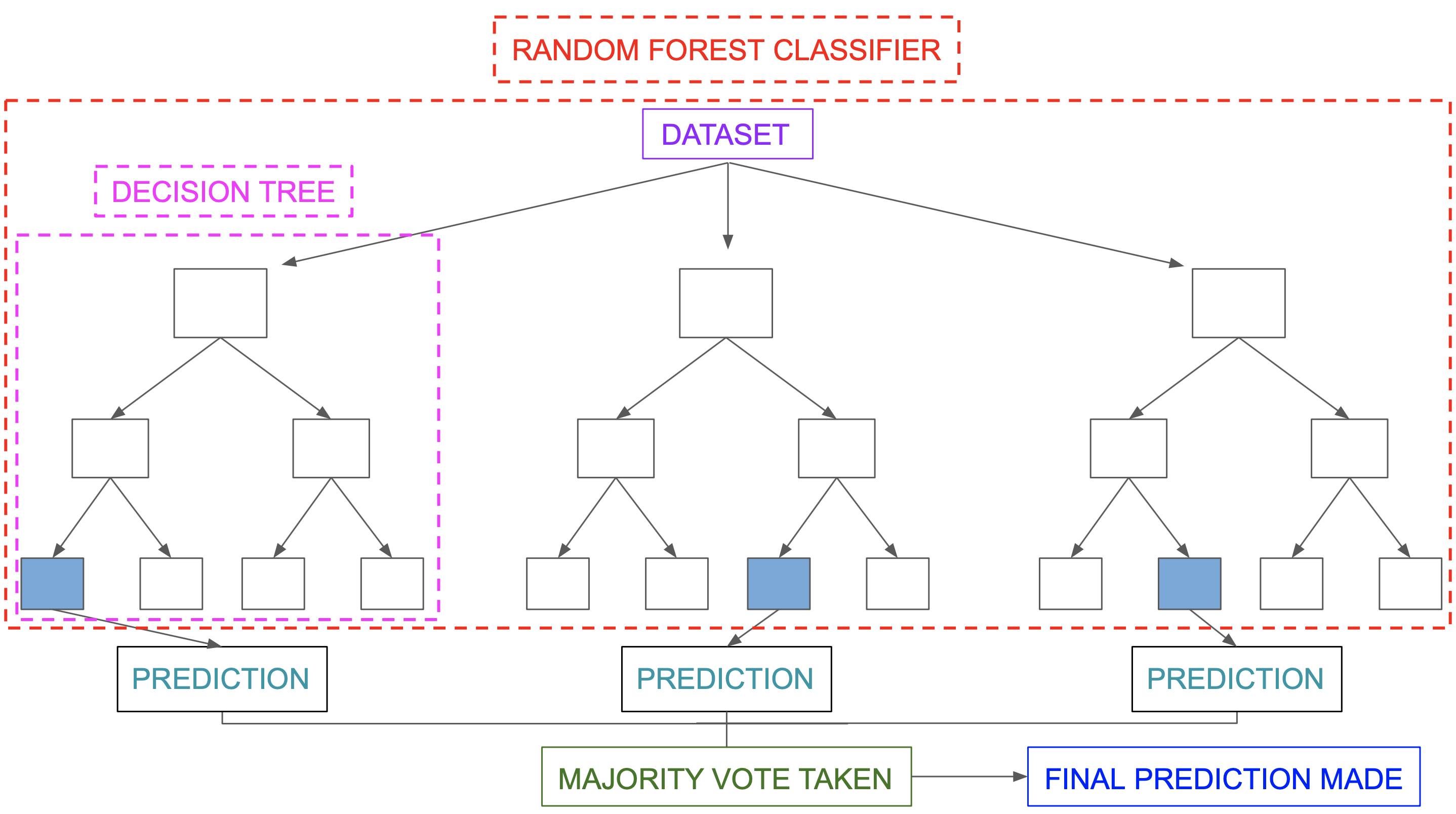 Let’s take an example of a training dataset consisting of various fruits such as bananas, apples, pineapples, and mangoes. The random forest classifier divides this dataset into subsets. These subsets are given to every decision tree in the random forest system. Each decision tree produces its specific output. For example, the prediction for trees 1 and 2 is apple. 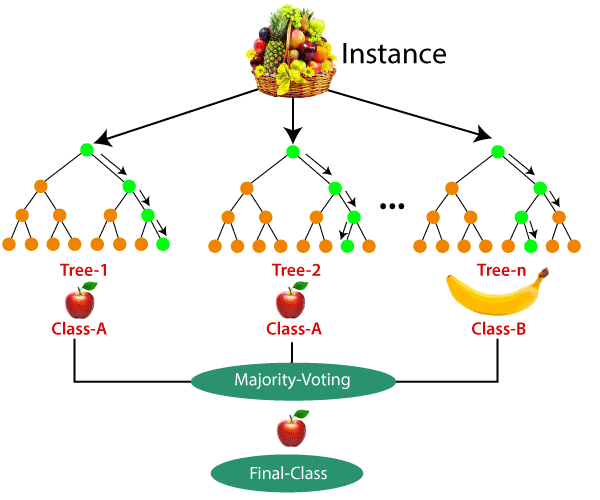 Some of the applications of the random forest may include:

Random forest is used in banking to predict the creditworthiness of a loan applicant. This helps the lending institution make a good decision on whether to give the customer the loan or not. Banks also use the random forest algorithm to detect fraudsters.

Health professionals use random forest systems to diagnose patients. Patients are diagnosed by assessing their previous medical history. Past medical records are reviewed to establish the right dosage for the patients.

Financial analysts use it to identify potential markets for stocks. It also enables them to identify the behavior of stocks.

Through rain forest algorithms, e-commerce vendors can predict the preference of customers based on past consumption behavior.

When to avoid using random forests

Random forest algorithms are not ideal in the following situations:

Random forest regression is not ideal in the extrapolation of data. Unlike linear regression, which uses existing observations to estimate values beyond the observation range. This explains why most applications of random forest relate to classification.

Random forest does not produce good results when the data is very sparse. In this case, the subset of features and the bootstrapped sample will produce an invariant space. This will lead to unproductive splits, which will affect the outcome.

The rain forest algorithm is a machine learning algorithm that is easy to use and flexible. It uses ensemble learning, which enables organizations to solve regression and classification problems.

This is an ideal algorithm for developers because it solves the problem of overfitting of datasets. It’s a very resourceful tool for making accurate predictions needed in strategic decision making in organizations.