DBMS or database management systems play a key role as the foundational building blocks of any modern application. Whether you are a database administrator, a developer, or an IT professional, extensive knowledge of databases is essential. In this article, we will look at a class of databases called time-series databases and understand how they work.

We are also going to explore the basics of the most popular time-series database called Influx DB. By the end of this article, you will have Influx DB installed on your system and be able to execute custom queries.

According to the official documentation, a time-series database (TSDB) is a database optimized for timestamped or time-series data. Time series data are simply measurements or events that are tracked, monitored, downsampled, and aggregated over time.

Furthermore, time-series databases are built to specifically handle this type of data with a timestamp associated with it.

Let us consider a few examples to understand this better. The stock market is a very volatile and time-dependent system. It is essential to monitor and store this information along with the timestamp of when the transactions happened. Another example would be gathering sensor data on temperature, pressure, or humidity.

These data types require a time associated with each record to help us understand the “trend” or analyze a pattern that changes over time. However, one might ask: Why can’t we just add a column/field called time and keep track of the timestamp when the event occurred.

This is possible, but there are two ways to do this: When we get a new record or data for a particular value such as temperature, should we overwrite the previous reading, or should we create a new row in the database?

Both methods will provide the current or most recent values. However, we can only analyze the trend of how the system changes over a period of time if we insert a new row. This is what time-series databases are optimized to do.

InfluxDB is the most popular open-source time-series database, created by a company called Influx data in 2013. InfluxDB provides APIs for various popular programming languages such as Python, Golang, Java, etc.

Congratulations! You have successfully installed InfluxDB on your system.

Now that you have InfluxDB installed on your system, you can run it and execute commands using the terminal or command line. InfluxDB also provides an aesthetic UI where you can run queries and create databases.

According to the official documentation, The influxd command starts and runs all the processes necessary for InfluxDB to function.

Open a terminal or command line and execute the following command:

This starts the server and runs all the processes necessary for InfluxDB. Open another terminal window and execute the following command to get access to the InfluxDB shell:

This starts a shell that allows us to execute queries.

Now that you have the Influx shell running, let’s execute some queries:

Create a database called “test” by executing the following command:

To see if the database has been created or not, execute the show databases command:

To use and switch to “test”, execute the use command:

InfluxDB requires a certain format for inserting data. Every record or row is referred to as a “point” and has 4 elements:

For more information on these elements, have a look at the official documentation.

The format for inserting data is as follows:

Now, we have inserted 3 rows into the measurement called temperature. We can make sure you don’t give a space between the comma that separates “temperature” and “location” because this will throw a syntax error.

To view the inserted data, execute the following query: 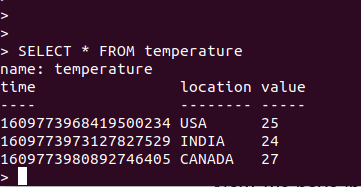