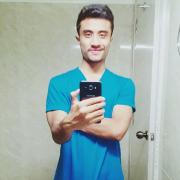 Deewakar Chakraborty is currently pursuing his Masters in Data Science at Defence Institute of Advanced Technology, DRDO Pune. He likes to build things and understand the problems that one cannot see through a strictly theoretical perspective. Apart from studies, he listens to Greenday and supports Real Madrid.

Machine learning algorithms work great when recognizing patterns in existing data. Then that insight can be used for classification and regression purposes. However, machines have struggled when asked to generate new data; this all changed in 2014 when Ian Goodfellow introduced the idea of Generative Adversarial Networks (GANs) to the world of machine learning.

The power of generative modeling makes GANs extend the capabilities of neural networks. This technique enabled machines to generate realistic data that plausibly come from an existing distribution of samples.

This blog will look through the basics of GANs and implement one using the PyTorch library.

Although I have tried to make this article as self-contained as possible, basic prior knowledge in Machine Learning is still required. Also, readers are requested to refer to the documentation of the PyTorch library. PyTorch is Python based open-source Machine Learning library that we will use to implement the GAN.

By the end of this blog, you will understand the following concepts:

The word generative in GAN indicates its sole purpose, that is, generating new data. The data generated by the GANs depends on which dataset we have trained our GAN on.

On the other hand, the word adversarial refers to the game-like competition between Generator and Discriminator about which we will learn in the latter part of the blog.

Before beginning the discussion about GANs, it is essential to understand generative modeling as it is the foundation of the concept of a GAN.

What is Generative Modeling

To explain Generative Modeling, I will take an example of a scenario where we have been given a Machine Learning model that classifies a given image into a cat or dog image.

Now, what if we want to reverse this process, that is, we have been given features about a dog, and we want our model to generate an image of a dog by using the given features? That is what a Generative Model does in the simplest form.

To explain this mathematically, let’s assume that we have a dataset with $x$ instances and corresponding $y$ labels. There are mainly two types of modeling in Machine Learning:

A human mind does something similar when we use it as a generative model. For example, let us consider a scenario where we are trying to explain what a dog is to a person who has never seen a dog in his entire life. We will describe how a dog looks to a person by giving all necessary features of a dog $(x)$. A person’s brain will then take this information $(p(x))$ and store it as encoded information in their mind $(z)$.

Now using $(z)$ as a source of inspiration human brain will try to recreate how a dog would look like $(x’)$. Note, the person’s brain doesn’t need to generate an exact image of how a dog looks in their brain. It will entirely depend on the information you gave $(x)$ and its modeling.

GANs are the class of ML techniques that consist of two simultaneously trained neural networks. One is a generator used to generate the fake data, and the other is a discriminator, which is used to classify whether input given to it is real or fake.

Imagine a scenario where a thief wants to steal a painting from a museum and replace it with a fake one, and there is a curator who has a job to detect whether the painting is real or fake. There will be a competition between the thief and curator, both of them will have an adversarial relationship. The thief is Generator, and the curator is Discriminator in our case. 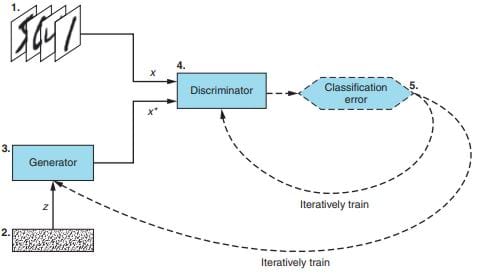 The architecture of GAN consists of the following components:

When does the training converge?

To explain how GANs are trained, first, I will discuss a setup in the game theory known as a zero-sum game, a two-player game in which one player improves by a certain amount and the other player worsens by the same amount. All zero-sum games have an equilibrium point at which neither player can improve their situation.

This point is known as nash equilibrium. We have something similar here with the case of GAN. In GAN, a Discriminator competes with a Generator same as two players of zero-sum games. Similarly, the training of the GANs converges when it achieves nash equilibrium.

Nash equilibrium is achieved in GAN when:

In practice, it is nearly impossible to achieve nash equilibrium while training a GAN due to its training complexity which means training of GAN never converges practically. However, without even converging, GANs can produce satisfactory results if trained carefully.

To implement a GAN, we will be using the standard MNIST dataset. After training the GAN on this dataset we will try to generate new data based on the MNIST dataset.

If you have a GPU present in your machine, the device will automatically be selected as Cuda; otherwise, it will be CPU. We are also setting up the hyperparameters required for training in the cell below.

In the cell below, we define the Discriminator network as a class that inherits from nn.Module class from PyTorch. It is again a simple two-layered network like the Generator. First, it takes the image as an input.

Notice that the activation function in the final layer is sigmoid which means the output of the network is between 0 and 1. 1 for the real image from the MNIST dataset and 0 for the fake image generated by the Generator network.

In transformation, we need to normalize the images before feeding them to the neural network and converting them into a tensor. Now we will load data to feed to the neural net using the DataLoader class. 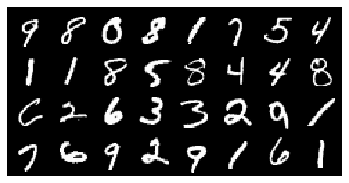 As we have discussed in the training of GANs earlier, the same principle is implemented programmatically with the help of the PyTorch library.

Notice we are backpropagating lossD, which is the average of lossD_real and lossD_fake to update the weights and biases of the Discriminator network.

Now that our training is complete, let us try to generate some new data. We are using fixed_noise to generate new data, thereby passing it to our generator network.

As our batch size is $32$, there will be $32$ images returned by the Generator network. We are using make_grid of torchvision.utils to display all images together. 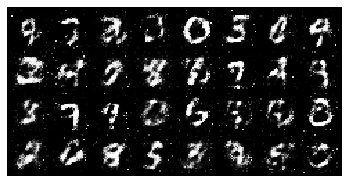 We have implemented a GAN in this blog, generating new data based on the MNIST dataset using random noise. A point to be noted is that we had to deal with MNIST data.

Here, the distribution is quite simple and modeled by the Generator, but what if our data was highly complex and had multi-model distribution. This is still an issue with the GANs and it restricts the ability of GANs to produce diverse results.