When using machine learning, we need to be able to trust our models and the predictions they make. We may use sample data to train our models. This sample data may make certain assumptions about a population.

Yet, if we have no way to test whether the assumptions represent a whole population or not, we will struggle to tell if our results are due to any statistical significance or just chance.

This article explores the steps to test out hypotheses in data science.

All that is required is a general understanding with the concepts in machine learning and statistics.

Significance of a hypothesis

A hypothesis can be described as a theory or argument that explains some observed phenomenon. In a scientific setting, a hypothesis is meant to be proven (or disproven) through experimentation.

In data science, a crucial part of the modeling process is first coming up with an important question or assumption. For example, we can say something like “different cars use the communal parking lot every day.” The framing of this statement makes it seem like we are declaring it to be true.

However, using a statistical approach, it might be better to frame it as “the cars that use the parking lot are the same.” We have framed the assumption as a null hypothesis, which we shall seek to disprove. The first statement can be thought of as an alternative hypothesis. We shall define these two types of hypotheses later on.

The significance of framing the two statements as we did above is to help eliminate randomness. We can compare it to the phrase “innocent until proven guilty” since we seek to disprove the null hypothesis and validate the alternative hypothesis.

When these two hypotheses are tested, we seek to prove that the data we used is statistically significant. This means that occurrences were not by chance alone. We shall define statistical significance later in this article.

Even though most of the concepts we will cover in this article are predominantly statistical, it is important to understand how the term hypothesis is perceived from either a purely statistical or machine learning perspective.

In statistical hypothesis testing, there is no comment on the size of the effect. These tests are concerned with how likely the effect is present or absent in the population in consideration. This is based on the observed data samples.

Statistical hypotheses are thus based on identifying the relationships between observations. They are probabilistic explanations about these relationships.

Null and alternative hypotheses are denoted as $H_0 and H_a$, respectively.

This target function should best carry out the mapping of inputs to outputs on all possible observations existing in the problem domain. The notation in this context is (h) for hypothesis and (H) for a hypothesis set. To better understand a hypothesis in machine learning, this post will be of use.

Steps to test a hypothesis

We say a finding is statistically significant when its likelihood of occurrence is very low, given the null hypothesis. This section describes the steps to test a hypothesis as we define the concepts involved in the testing process.

The first step in testing a hypothesis is first defining the hypothesis. This is done by establishing both a null and alternative hypothesis. A null hypothesis can be thought of as a statement claiming no relationship between two measured events. It is an assumption made, which may be based on domain experience.

Scientists carry out experiments to retain or reject a null hypothesis based upon the nature of (or lack of) the relationship between occurrences. A null hypothesis is usually considered to be true until proven otherwise. 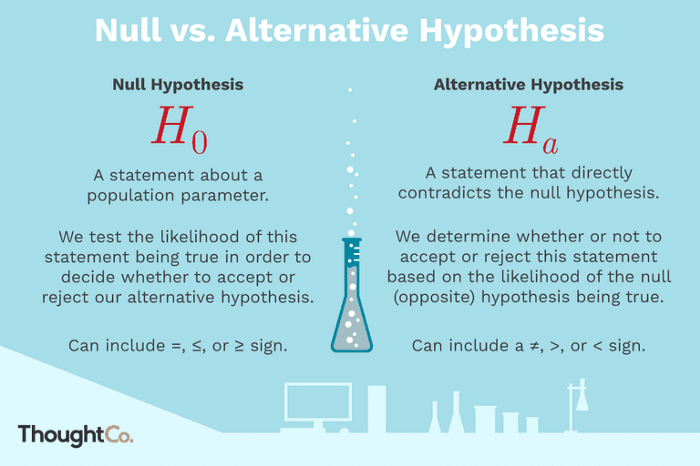 After forming our null and alternative hypotheses, we should select a significance level. This is the measure of the influence of the evidence that needs to be available in a sample before rejecting the null hypothesis. The significance level is usually 5%. It means that it is probable that the test may suffer a type I error.

The image below visualizes the significance level.

Since the significance level is 5%, our level of confidence becomes 95%. This means that 95% of hypothesis tests won’t end in a type I error. You may ask why 5% and not any other value is commonly chosen. It simply is standard practice to use 5%. We mentioned a type I error above.

Let’s define what type I and II errors are.

Type I error. This is an error characterized by a scenario where we reject a true null hypothesis. The symbol alpha represents it.

Type II error. We can define a type II error in a situation where we retain a null hypothesis, but it is false. It is denoted by beta.

Find the region of rejection for the null hypothesis

There exists a region in the sample space where we reject the null hypothesis. The rejection is if a calculated value lies in the region. This region is known as the critical region.

We may reference the image in the previous section. A normal curve depicts the critical region in hypothesis testing. In the case of a type I error, it is referred to as the alpha region. It is a beta region in the context of a type II error.

Assuming the null hypothesis is true, the probability of getting an outcome at least as extreme as the observed outcome of a hypothesis test is what we call the p-value. The meaning of “extreme” is dependent on how the testing is carried out.

The p-value determines whether there is enough evidence to retain the alternative hypothesis or retain the null hypothesis. Given the probability distribution of a specific statistic we are testing, we may use the deviation between an observed value and a selected reference value.

The greater the difference between the two values, the lower the p-value. The p-value is lowered as a result of this difference, that shows that it is less likely that the difference is thanks to random chance.

To better understand how to calculate the p-value, with examples, I suggest going through this post.

Many tests may be used to compute the critical region. Other hypothesis testing types include the t-test, z-test, ANOVA test, and chi-square test. A t-test computes the difference between the means of a pair of groups that might have related features. z-tests also test the means of two populations.

ANOVA may be used when comparing more than two groups simultaneously. A chi-square test is used in the presence of a pair of categorical variables in a population. In the context of this article, since we are comparing two distributions, the p-test is the best suitable test. We shall explore the other types of hypothesis tests in a future article.

A crucial part of the modeling process is having a significant question or assumption. This are what form our hypothesis. In addition to formulating the right hypotheses, it is important to test them out.

We have introduced the concept of a hypothesis and discussed its significance. We have gone further to give a basic overview of the steps taken to test a hypothesis. In the future, we may dive into the different tests used to test out hypotheses.