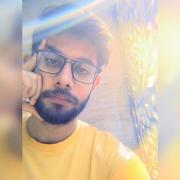 Sarthak Duggal is a college student pursuing B.Tech in Computer Science Engineering. He is currently in the third year of college and interested in Full-Stack Web Development.

How does CSS works behind the scenes?

Parsing means taking the HTML code and then extracting valuable information from it. This includes information like the title of the page, header links, and the body content.

Before jumping right into the topic, we have to look at the first thing that happens while loading a website in a browser. When the root HTML document is being loaded, that is what we call being parsed.

After it parses the HTML document, all it stores the code in a DOM (Document Object Model). It describes the entire web page consisting of parents, children, and siblings. It separates the header links that contain the CSS files during parsing.

The separated CSS files go to the next step, i.e. loading the CSS files.

The first step is: Resolving the CSS declarations conflicts, and this step is also known as Cascading.

There are three kinds of CSS:

Cascade marks the importance of CSS styles based on the source they are coming from in the following order:

Consider this example: We have a button with a class button under the nav element. We have conflicted the background-color property of this button as: 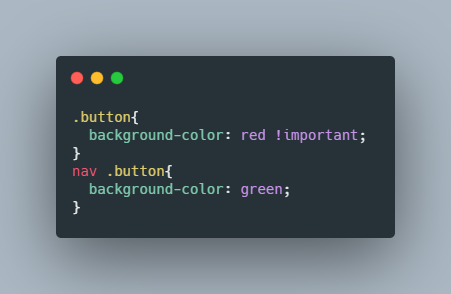 In this case, the background-color property with the color red will be applied. This is because it’s marked with an !important keyword. This is how ‘importance’ is applied while cascading.

Now, consider a situation when two or more conflicting styles have the same importance. In that case, we use the specificity of the selectors that we are using to style the element, and the selector specificity is given as:

Inline styles or Inline CSS have the highest precedence because they are written in HTML documents and not in the separate CSS files.

We can find the specificity of any element based on the selectors we are using like this: (I, ID, C, E).

Consider this example, in which we have styled an element in a separate CSS file.

Let’s create an example showing how it resolves the conflict 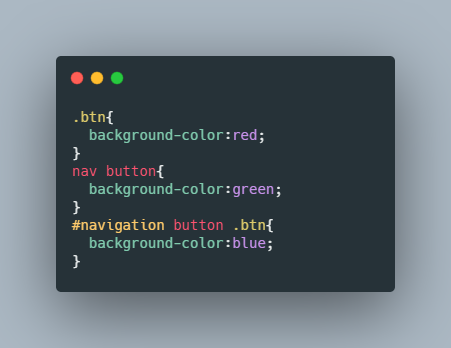 Let’s start by writing the specificity for all these styles:

As we can see that the inline specificity is the same in all three, so we will go to the next precedence, i.e., ID. Now ID for the 1st and 2nd is 0 except the 3rd block has 1.

Thus the 3rd block has a higher specificity than the other 2.

Now we don’t even have to look at the other precedence, i.e., classes and elements.

In this case, the 3rd block of style will be applied to the background - and color of the button will be blue.

But, there could be a case when the ID could also be the same, we would go to the next precedence until we found a winner.

In that case, we would go to the very last scene we had while resolving the conflicts, and that’s Source order.

If the last two scenarios, i.e., importance, and specificity failed, we could decide the style by comparing the source order. This means if two blocks have the same importance and specificity, then the one written last will be applied.

So this finishes the first step of parsing the CSS, i.e, Cascading.

This step includes giving the final processed values to all the styles.
The default font-size of content on a webpage is always 16px, that is the style from the browser CSS, and if needed we could change it. Also, we should never set the font-size in pixels. Otherwise, the user cannot change the size from the browser settings, which is a bad user experience. To solve this problem by setting the font-size in ‘rem’ and 1rem=16px to be exact.
We could also set the font size in percentage, and it would set it to the given percentage of the parent’s font size. In the case of something like padding:15%, it will set the padding to 15% of the parent’s element total width.

Now that CSS’s parsing has been completed, all the parsed CSS is stored in a CSS object model, similar to the DOM. So, let’s look at the flowchart again.

Now that both HTML and CSS have been parsed and stored into their object models, they both form the Render Tree. It’s formed with a combination of HTML, DOM, and CSS-OM. It’s used to calculate the layout of each element on the page and helps render the page.