How AI predicted the Coronavirus Outbreak

In our hyper-connected world, outbreaks spread fast. If we want to stay ahead of them, we have to find ways of moving even faster. In 2013, having learned from previous outbreaks, a Canadian company, BlueDot was able to utilize the power of Artificial Intelligent (AI) to build a software that could detect outbreaks in record time.

About the Canadian company, BlueDot

BlueDot is a software company founded in Toronto, Canada, in 2013 by Dr. Kamran Khan. Inspired by the Severe Acute Respiratory Syndrome (SARS) outbreak in 2003 that ended up crippling his city of Toronto, he embarked on a journey of finding a solution that would help the world be better prepared to respond to future threats of infectious disease.

The company has made highlights since late December 2019 after their software detected undiagnosed pneumonia in the Wuhan city of China on December 31st, 2019. This was significant as their report came in nine days before the World Health Organization (WHO) had made a public warning about it. This was echoed by Canada’s Prime Minister, Justin Trudeau, who was quoted saying,

“BlueDot in Toronto was among the first in the world to identify the spread of COVID-19, coming in nine days ahead of the World Health Organization’s public warning. We’ve signed a contract to use this Canadian software to model the disease."

BlueDot also accurately predicted the spread of the Zika virus in 2016 into Florida. Their prediction came six months before the World Health Organization had made any official reports. This was published in a British medical journal, The Lancet.

In 2014, the BlueDot’s software accurately predicted importation risks from the Ebola virus outbreak from West Africa.

How their software works

BlueDot’s software leverages its predictions on big data. Big data can be simplified as large volumes of structured and unstructured data produced by businesses on a day-to-day basis for those not familiar with big data. This data keeps on growing exponentially with time.

That’s a lot of data. That would require a team of experts to go through these large amounts of data and clearly take a lot of time. It is nearly an impossible accomplishment.

This is where ML and AI is leveraged to augment the detection of the global epidemic threats in near real-time.

The information sources they use in the AI system include:

This data is then fed into their AI software, which then eliminates noise, i.e., an article on anthrax causes and an article on a real anthrax outbreak. Another good example of noise that would need to be eliminated is an outbreak of influenza and an outbreak of a deadly infectious virus that looks like influenza. This is the case of Covid-19 in early January 2020.

The software then predicts when new outbreaks would occur, track already existing outbreaks, track locations, time of outbreaks, and contextual data such as the number of cases and deaths.

The predictions are then evaluated by doctors, scientists, and epidemiologists trained to make sure that these predictions make sense scientifically.

Suppose the scientists and epidemiologists find that the predictions are valid. In that case, they will submit reports to government agencies, public health officials, airlines, and hospitals receiving patients with the unknown disease explaining what the outbreak might be and where they would expect it to start or spread to.

For example, in the case of Covid-19, they did predict that there was an emerging risk of contagious pneumonia in Wuhan. They also accurately predicted eight out of the top ten countries the virus would first spread to based on 2019’s flight ticket sales data from the International Air Transport Association (IATA) on flights originating from Wuhan.

They realized that some countries, including Bangkok, Tokyo, Hong Kong, Singapore, Phuket, Seoul, and Taipei, had large volumes of passengers from the Wuhan airport. Reports later showed that these countries were the first to register Covid-19 cases.

Besides, BlueDot’s software made predictions on countries at higher risks of the spread between February and April based on IATA’s passengers’ travel data from cities in China from 2019. 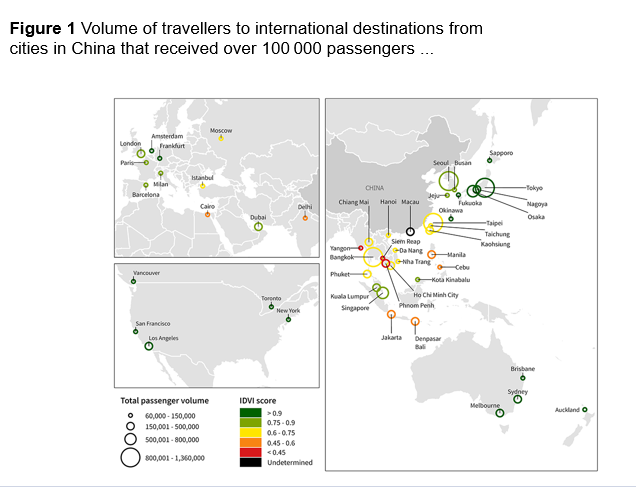 The figure above represents travelers’ volume to international destinations from cities in China that received over 100,000 passengers between February through April, from Wuhan, China, and the corresponding Infectious Diseases Vulnerability Index in the receiving countries. The larger circles represent a larger volume of passengers and an increased risk of spreading the virus in that country.

The Infectious Disease Vulnerability Index (IDVI) is a measure of a country’s capacity to mitigate infectious disease threats. The score ranges from 0 to 1, with scores closer to 1 showing countries with greater capacity to manage threats.

What’s next for BlueDot

BlueDot provides a Software-As-A-Service (SAAS) delivery model. It has partnered with businesses, governments, and healthcare facilities to offer services on a subscription basis. This gives them access to BlueDot’s timely insights, focused reports, and their cloud platform for global disease surveillance.

We are living in an interesting era. We have growing access to data, advanced analytical tools for Machine Learning (ML), and Artificial Intelligence (AI) that allow us to disseminate infectious diseases spread insights around the world faster than outbreaks can.

BlueDot was able to bring all these moving pieces together, and have been able to detect infectious diseases from the Ebola virus in West Africa to Covid-19 in Wuhan city in China. Their detection system curates information from not only official reports but also unofficial reports. That explains why they could detect the coronavirus disease in Wuhan even before official reports had been made.

Diseases spread incredibly quickly. Thus, time is our most valuable resource to mitigate the impacts of an outbreak. Thanks to AI systems such as BlueDot, infectious diseases such as The Zika virus and Covid-19 can be detected quickly.