Imagine you want to gather a large amount of data from several websites as quickly as possible, will you do it manually, or will you search for it all in a practical way? Now you are asking yourself, why would you want to do that! Okay, follow along as we go over some examples to understand the need for web scraping:

Before we dive right in, the reader would need to have the following:

Now after having a brief about web scraping let’s talk about the most important thing, that is the “legal issues” surrounding the topic.

How to know if the website allows web scraping?

The rule above tells us that the site is doing a delay of 5 sec between the requests.

On www.facebook.com/robots.txt you can find this rule listed above, it means that a Discord bot has the permission to do web scraping on Facebook videos.

If the result is a 200 then you have the permission to perform web scraping on the website, but you also have to take a look at the scraping rules.

As an example, if you run the following code:

If the result is a 200 then you have the permission to start crawling, but you must also be aware of the following Points:

As we know, Python has different libraries for different purposes.

In this tutorial, we are going to use Beautiful Soup4, urllib, requests, and plyer libraries.

For Windows users you can install it using the following command in your terminal:

For Linux users you can use:

You’re ready to go, let’s get started and learn a bit more on web scraping through two real-life projects.

One year ago, I wanted to build a smart AI bot, I aimed to make it talk like a human, but I had a problem, I didn’t have a good dataset to train my bot on, so I decided to use posts and comments from REDDIT.

Here we will go through how to build the basics of the aforementioned app step by step, and we will use https://old.reddit.com/.

First of all, we imported the libraries we want to use in our code.

Requests library allows us to do GET, PUT,.. requests to the website server, and the beautiful soup library is used for parsing a page then pulling out a specific item from it. We’ll see it in a practical example soon.

Second, the URL we are going to use is for the TOP posts on Reddit.

Third, the headers part with “User-Agent” is a browser-related method to not let the server know that you are a bot and restrict your requests number, to find out your “User-Agent” you can do a web search for “what is my User-Agent?” in your browser.

Finally, we did a get request to connect to that URL then to pull out the HTML code for that page using the Beautiful Soup library.

Now let’s move on to the next step of building our app:

Open this URL then press F12 to inspect the page, you will see the HTML code for it. To know in what line you can find the HTML code for the element you want to locate, you have to do a right-click on that element then click on inspect.

After doing the process above on the first title on the page, you can see the following code with a highlight for the tag that holds the data you right-clicked on:

Now let’s pull out every title on that page. You can see that there is a “div” that contains a table called siteTable, then the title is within it.

First, we have to search for that table, then get every “a” element in it that has a class “title”.

Now from each element, we will extract the text that is the title, then put every title in the dictionary before printing it.

After running our code you will see the following result, which is every title on that page:

Finally, you can do the same process for the comments and replies to build up a good dataset as mentioned before.

When it comes to web scraping, an API is the best solution that comes to the mind of most data scientists. APIs (Application Programming Interfaces) is an intermediary that allows one software to talk to another. In simple terms, you can ask the API for specific data by passing JSON to it and in return, it will also give you a JSON data format.

For example, Reddit has a publicly-documented API that can be utilized that you can find here.

Also, it is worth mentioning that certain websites contain XHTML or RSS feeds that can be parsed as XML (Extensible Markup Language). XML does not define the form of the page, it defines the content, and it’s free of any formatting constraints, so it will be much easier to scrape a website that is using XML.

For example, REDDIT provides RSS feeds that can be parsed as XML that you can find here.

Now, we are going to learn how to build a notification system for Covid-19 so we will be able to know the number of new cases and deaths within our country.

The data is taken from worldmeter website where you can find the COVID-19 real-time update for any country in the world.

Let’s get started by importing the libraries we are going to use:

Here we are using urllib to make requests, but feel free to use the request library that we used in the Reddit Web Scraper example above.

We are using the plyer package to show the notifications, and the time to make the next notification pop up after a time we set.

In the code above you can change US in the URL to the name of your country, and the urlopen is doing the same as opening the URL in your browser.

Now if we open this URL and scroll down to the UPDATES section, then right-click on the “new cases” and click on inspect, we will see the following HTML code for it: 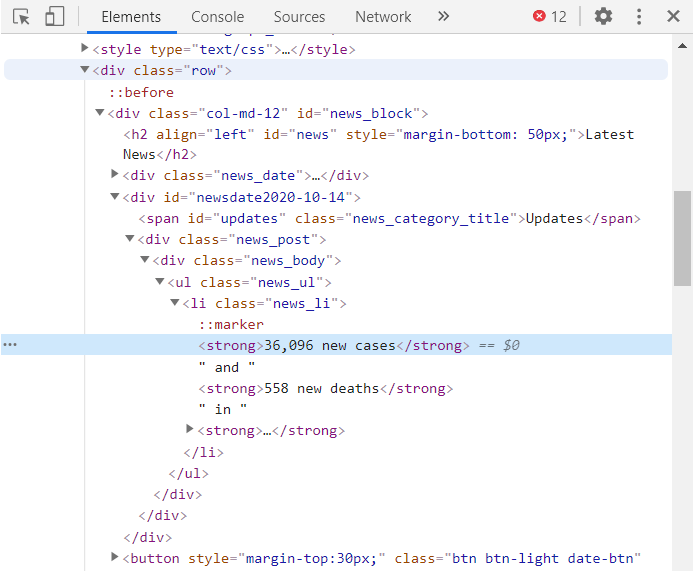 We can see that the new cases and deaths part is within the “li” tag and “news_li” class, let’s write a code snippet to extract that data from it.

After pulling out the HTML code from the page and searching for the tag and class we talked about, we are taking the strong element that contain in the first part the new cases number, and in the second part the new deaths number by using “next siblings”.

In the last part of our code, we are making an infinite while loop that uses the data we pulled out before, to show it in a notification pop up. The delay time before the next notification will pop up is set to 20 seconds which you can change to whatever you want.

After running our code you will see the following notification in the right-hand corner of your desktop.

We’ve just proven that anything on the web can be scraped and stored, there are a lot of reasons why we would want to use that information, as an example:

Imagine you are working with a social media platform, and you have a task that is deleting any posts that may be against the community, the best way of doing that task is by developing a web scraper application that scrapes and stores the likes and comments number for every post, after that if the post received a lot of comments but without any like, we can deduce, that this particular post may be striking a chord in people and we should take a look at it.

There are a lot of possibilities, and it’s up to you (as a developer) to choose how you will use that information.

Ahmad is a passionate software developer, an avid researcher, and a business man. He began his journey to be a cybersecurity expert two years ago. Also he participated in a lot of hackathons and programming competitions. As he says “Knowledge is power” so he wants to deliver good content by being a technical writer.