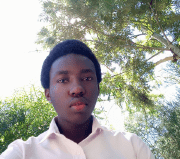 Felix Vaati is a cybersecurity enthusiast curious about hacking & programming. He is a self-taught and solution-driven Android software developer. He enjoys teaming up with all levels of developers to solve complex problems and learn from others.

Getting Started with Visual Basic.NET

Visual Basic.net is a multi-paradigm, object-oriented programming language. We implement it in the .NET Framework developed by Microsoft. They invented Visual Basic in 2001 to replace Visual Basic 6.

Visual Basic.Net is pronounced as “Visual basic dot net“. We commonly abbreviate it as VB.NET.

Although VB.NET is a developed version of Visual Basic 6, it is not compatible with it, .i.e. we cannot compile code written in Visual Basic 6 under VB.NET.

Although VB.NET may have a couple of advantages, it also has some drawbacks associated with it. They include :

To get started, you will need a development environment. This is where we will write and debug our code. We will use Visual Studio as our text editor.

After you have selected Visual Studio, choose .NET desktop to develop and click Modify.

After the installation, click Launch to get started. On the new window, choose Create a new project. 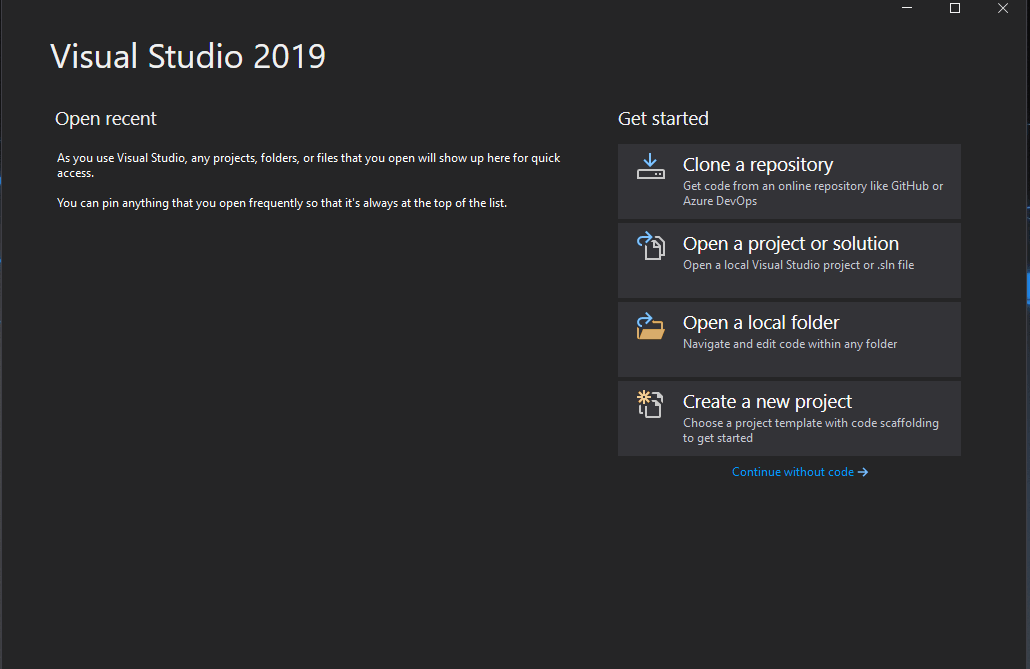 Once you have selected Create a new project, choose ” Install more tools and features" then click Next. 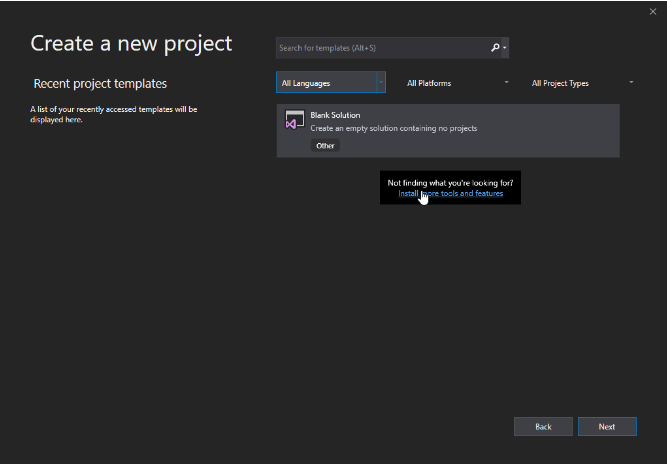 Pick Visual Basic from the drop-down menu, then select Console Application from the list and click Next. 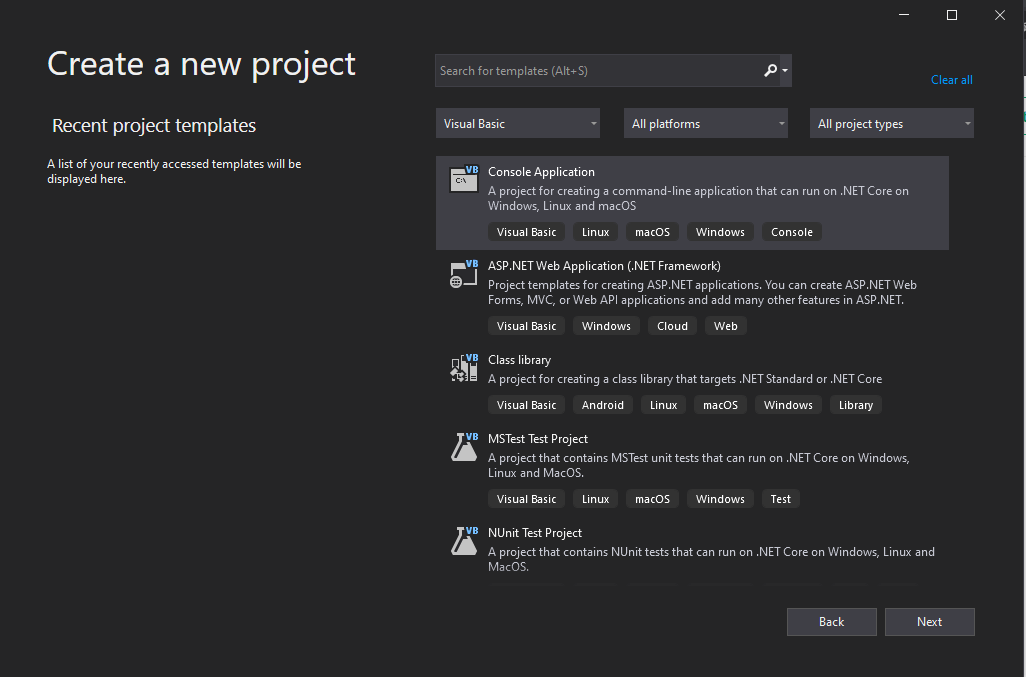 Enter your preferred project name and click Next. Here, I will name my file hello world. 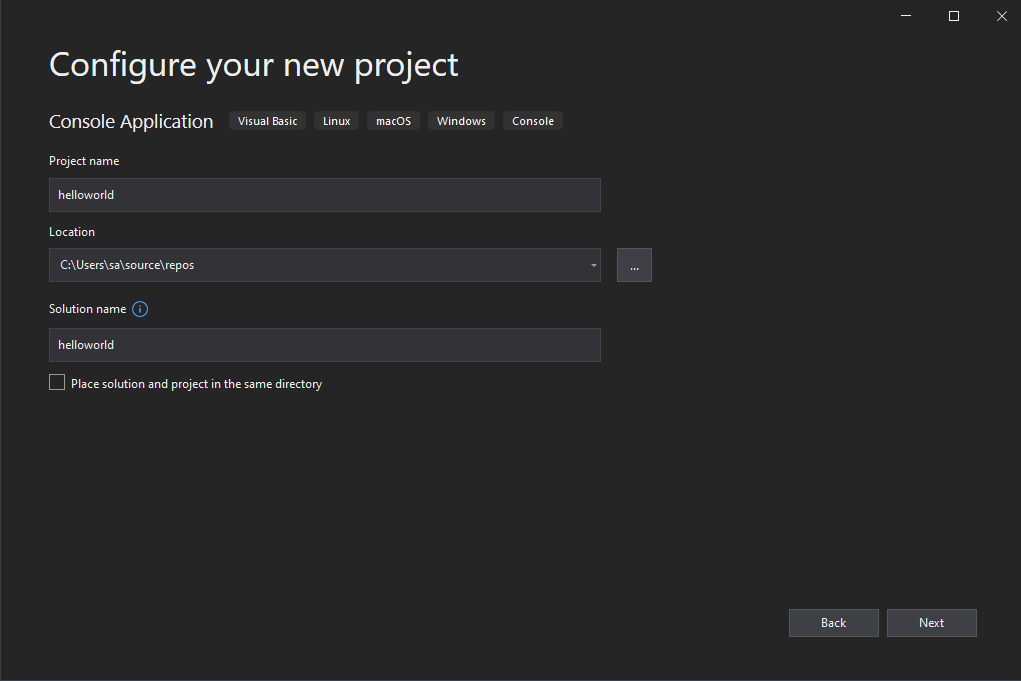 After selecting the target framework you desire, click Create. Visual Code will auto-generate some VB.NET code for you.

Let’s look at the code.

We have the code generated below. It’s a Hello World program.

Press the F5 key on your keyboard to run your program. This will compile and run your code.

A console window will open with the following output:

We will look at each line of code from our program generated by Visual Studio.

This line is used to include a namespace, system in our program. With that namespace, we will access all the methods defined in it without getting an error.

A Namespace can be defined as a group of codes that are related to each other. It majorly comprises pieces of code such as classes, procedures, and functions.

A module defines a reference sort obtainable throughout its namespace. For our HelloWorld program, we have declared our module and named it Program. Inside this module, we will define methods to be used by our program. To close our module, we use the End keyword.

Our module has one procedure, Sub. A procedure is a block of code enclosed by a declaration statement with a matching end declaration. From this line execution of our program will begin. Each program in VB.NET should have a main method.

Console.WriteLine() prints out text on the console. After printing a string, it adds a new line at the end. In our program, it will output  “Hello World!”.

Alternatively, we can use Console.Write() instead of Console.WriteLine() .The major difference is that Console. Write() does not add a new line at the end of the string. We can find more about the two commands here.

To read the next characters from a standard input stream, we use Console.ReadLine().

Console.Read() reads the next Character from the input.

Console.ReadKey() gets the next character pressed by the user. Then, we display the key in the console window.

Comments help a programmer understand what the code does at a particular stage. They are mainly used to make code readable and easy to understand.

The compiler usually ignores comments when compiling the code.

In VB.NET, comments start with a single apostrophe ’.

Unfortunately, for Visual Basic, we do not have block comments. All comments are single-line comments.

To learn a few more terms, we will write a simple program to add two numbers entered by the user.

Here’s how the output will look like when we input our first number as 2 and the second as 6 :

Let’s look at the new lines in this program.

This line declares variables that will store the user input and the result of the addition by the system.

As Integer means that the declared variables will be of the data type Integer Int. Apart from integers, we have other data types, such as

This line assigns the user input to our declared variable for storage. We can see that we repeat this step for the second input under a different variable. This is because a variable can only hold value for one input. So in case, we assign a second, it will replace the original one.

In this tutorial, we looked at :