Getting Started with the Metasploit Framework

Due to the numerous cases of cyber insecurity, companies have now adopted hiring hackers and security specialists to test their systems for vulnerabilities. Hackers, therefore, perform a penetration test on the systems by use of various tools, one of which is commonly used is Metasploit Framework.

The Metasploit Framework is a powerful penetration-testing tool used by ethical hackers and cybercriminals to examine a system’s vulnerability to the network.

It is considered the most useful security auditing tool since it contains information-gathering tools, web vulnerability plugins, modules, and an exploit development environment.

In this tutorial, we will learn how to install Metasploit Framework on your machine and also run some major commands. But before running any command on Metasploit, one should first scan the network for vulnerabilities and gather the necessary information to perform an exploit.

Go through the Introduction to Nmap tutorial to learn how to scan your targets.

Disclaimer: This tutorial is meant for educational purposes only and for this case I will be exploiting my own local machine.

In your case, it is recommended that you use Metasploitable 2 as a target to exploit, which is an intentionally vulnerable device that provides a secure environment to learn penetration testing.

In most cases, the Metasploit Framework is pre-installed in Kali Linux (the most recommended OS for penetration testing). For cases where it is missing, follow through for a successful installation.

First, start the terminal and run the command below.

After successfully running the command, you should have Metasploit Framework on your machine.

To run Metasploit faster, you should first start the Postgresql database by running the command below. The command returns nothing.

Note: For the latest version of Kali Linux (2020), you should precede commands that require root privileges with the keyword sudo.

If you are launching Metasploit Framework, you have to initialize its database by running the command below:

You are now ready to start your Metasploit Framework.

Start Metasploit by running the command below:

Starting Metasploit may take a while since it loads everything in RAM. So be patient. 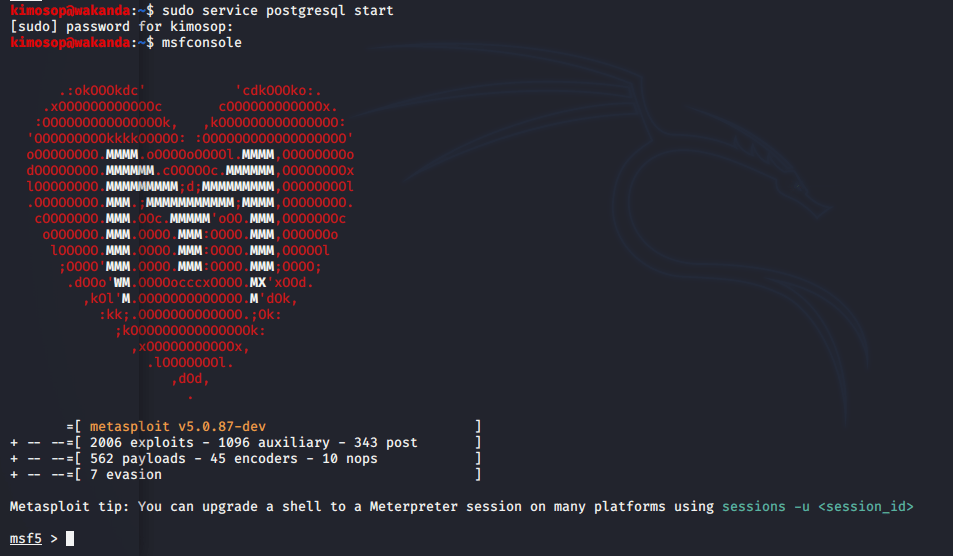 Hurrah! You have successfully started your Metasploit-Framework.

Don’t worry if it doesn’t look the same.

The Metasploit Framework contains a piece of software known as a module that performs tasks such as scanning and exploiting targets.

Modules are the main components of the Metasploit Framework and are broken down into 7 types below:

Any other modules that are not exploited are auxiliary modules. They have fascinating features that allow them to do more than just exploiting.

To start, type in the help command to see the various commands you are most likely to interact with.

To narrow down your search, use a specific keyword as guided below:

Type in the search keyword followed by a colon and then specify the keyword stated as shown below.

As you can see from the example below, Metasploit returns modules fitting the search parameters.

The use command stages an exploit and makes it available when an exploit is run.

Exploits can be staged as shown in the example below:

If the module is successfully staged, Metasploit will respond by showing the type of exploit and abbreviates it in red as shown below.

After staging an exploit, you can run the info command to retrieve information like the name, author, and platform of the exploit.

After successfully staging an exploit, use the show command to see the available payloads, targets, or options corresponding with the staged exploit.

The three most used show commands are:

The command show targets, lists all the targets vulnerable to the staged exploit. A target’s vulnerability can vary depending on the Operating system, update, language among others things.

As you can see from the example above, we have a target vulnerable to the exploit we used.

This command is often useful, as it shows the options yet to be set before running the exploit. Options to be set may include RHOST, LHOST, PATH, LPORT, etc.

The command is run as shown below:

This command sets an option or overwrites an undesired option. The options to be set depends on the staged module. Options to be set may include RHOST, LHOST, PATH, etc.

Options can be set as the following:

As you can now see from the show options, the LHOST has been successfully set.

Once the exploit is staged and all the options have been set, you are now ready to run the attack.

You can run the attack by using the exploit or run keyword as shown below:

This command takes us one step back. It is applicable in cases when you want to make changes to the options set.

This command exits the msfconsole and takes us back to the terminal:

I suggest you use Metasploitable 2 to practice your exploits since it provides a secure environment to perform penetration testing and security research.

In this article, we have learned the following: