Maurine is an undergraduate student pursuing Information Technology. She is interested in learning new things, sharing ideas and most importantly creating Mobile/Web applications. Besides coding, Maurine likes to spend her time reading novels.

Getting Started With Jetpack Compose

Jetpack Compose is a contemporary toolkit for Android that makes UI development easier. This article will walk you through the fundamental concepts that you need to get started with this new and quick development paradigm.

Android’s imperative UI design paradigm is over 11 years old at the time of writing this article 😱. Over this time, a lot of issues have been raised concerning its overall performance. Android developers wished that the old view system and XML layouts were no longer an issue.

Jetpack Compose is totally declarative, which means you can describe your user interface by invoking a set of composables.

Jetpack Compose has the following benefits:

To follow through this tutorial, you need the following:

NOTE: At the time of writing this article, Compose is still in Beta, meaning it’s not yet available on the Stable channel of Android Studio.

For this reason, we’re going to install Android Studio 2020.3.1 Beta 4 (or later). Both Beta and Canary version have support for Compose. However, I’d recommend you to use Beta(from Arctic Fox distribution) over the Canary version (Bumblebee) due to some weird bugs I’ve personally experienced with it.

(Assuming that you’re running on Linux or Mac).

Head to the official website and grab the latest version of the IDE. Upon downloading, extract the file and run studio.sh file located at /android-studio/bin/studio.sh. Leave everything as default and wait for it to finish.

On Mac, drag and drop the unpacked file ~/android-studio into the applications folder and launch it. For other OS users, please refer to this guide for further guidance.

Launch the IDE and select the Empty Compose Activity template in the new project panel. Give your project any name and hit next/finish. 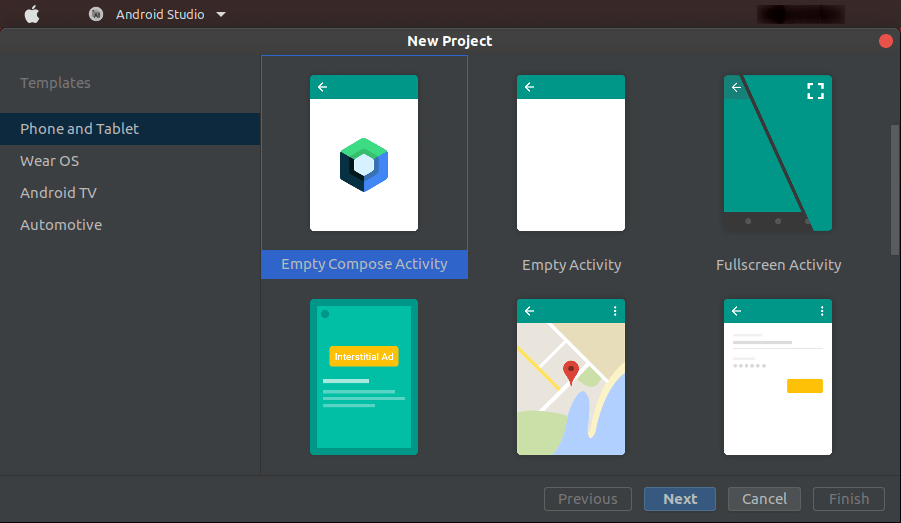 Once build finishes, the MainActivity file opens up. This serves as the entry point for our Application.

Before we proceed, it’s good to understand the code that comes with the Compose template.

The MainActivity class inherits from ComponentActivity() which is a building block for Jetpack Compose components. The setContent lambda determines what will be displayed on the screen at runtime. It makes use of the Material theme when calling Composable functions (discussed below).

A Composable function is a tool that transforms data into a UI hierarchy. It’s just like a regular Kotlin function only that it is annotated with @Composable annotation.

A Composable function can take parameters of any type if need be. Notice that the function’s name starts with an uppercase letter. Otherwise, the IDE yells at you! raising a warning over the same.

When working with composable functions that accept arguments, it is recommended to use named parameters strategy to let the compiler know which properties are being implemented since we may not use all available properties.

Previews give the developer a clue on how to expect the app to look at runtime. In compose, a preview is created by annotating a composable function with @Preview annotation. You can have as many previews as you wish especially when you want to test different UI components in different composables at the same time.

UI elements play a paramount role in an app. In most cases, users give their feedback based on how the UI looks like. Compose has different techniques for creating these elements more concisely.

This is an inbuilt composable function that displays a string provided in its parameter.

Other than a plain string, a Text accepts a decorated string otherwise referred to as an annotated string. This is done using an annotation builder as shown below.

This produces a colored text.

The repeat function can be used to duplicate a text instead of creating multiple independent Texts.

This creates a text “Android” and repeats it 30 times. The maxLines attribute determines the maximum number of lines a text can take regardless of repeated times.

This is a composable function that displays a button on the screen. It’s unusual to come across an app that doesn’t have any buttons!

A button can be advanced by adding a style as a parameter.

Images are one of the components that makes an app appealing. Compose uses the Image function and a painter (the actual image resource) to display an image.

A content description is optional but it’s very important especially to visually impaired users. Similarly, we can style an image by providing parameters such as contentScale, modifier, etc. Click Command (⌘) + P to see all the possible parameters.

A text field is used to take user inputs. This input could be a number, password, or plain string.

The textState variable is a remembered state, meaning that its value is maintained during recomposition. Without it, characters won’t appear when typing.

This is an advanced TextField whose label ‘jumps’ to the outline of the field once the user starts typing.

A visual transformation determines the input type of a TextField. For instance, to request a password input, we’d use;

A composable’s appearance can be decorated using a property function known as a ‘modifier’. Any inbuilt composable can be modified using a modifier. When using a series of modifiers, the results of the previous one become the input of the next one. For this reason, we should be very keen on the order of modifiers.

Let’s take an image for example.

A modifier can be applied to multiple elements for similar modifications. This can be achieved through;

i). Passing a modifier as a parameter in a Composable function

A high-order function that accepts a composable function as an argument can be used to reuse other composables. This helps to keep your code DRY.

Call our function and pass a composable in its lambda.

Create a function to be reused.

You may have realized that Compose builds on this approach. For instance, a button accepts onClick lambda whose value is a function.

A surface is a scope in which components lay on the screen.

You may have noticed that when you use more than one UI composable, the elements are stack on each other! Compose layouts allows us to arrange components with respect to each other.

A row lays items horizontally. The order of appearance of an item is determined by its position in the code block.

This is similar to Frame Layout in the imperative design.

If your items get out of view, you can use the Modifier.horizontalScroll or Modifier.verticalScroll modifiers to enable the respective scrolling mode.

A state is a value that has the potential to change over time. In compose the UI is immutable in that it can only be fully drawn/composed once. However, when states of some parts of the UI change, compose recreates them. This is referred to as intelligent recomposition. During this process, we need to persist our states for the updates to be effective. This is where remember comes in. Remember is a property delegate used to persist immutable and mutable objects.

We use this state to observe events or get their value at any given time.

State hoisting deals with making stateful composables stateless meaning that a composable can then not change any state itself. State hoisting improves the code readability and promotes unit directional flow of data in one direction. This way, debugging is made easier. You can learn more about state hoisting here.

In this article, we’ve covered the core concepts of the declarative paradigm in Android. Jetpack Compose is still very young and a lot of updates are being uploaded now and then. For this reason, I’d recommend you to regularly keep checking the release notes to stay updated.

However, Compose is ready for its stable version 1.0 which will be released on 10th July 2021. At Google I/O 2021, Google announced that its framework is getting ready for the new design language referred to as Material You.

You can get the source code used in this tutorial on my Github Repo.