We build machine learning models to provide the best possible predictions to a given problem. However, a single model may not make the best predictions and may be subject to errors such as variance and bias.

Why use ensemble learning?

Compared to using a single model, it’s beneficial to use an ensemble for a couple of reasons:

Performance: As described in the previous section, the outcome of ensemble learning is a strong learner — the strong learner results from weak learners. As a result, the predictive capability of models is improved. Compared to a single model, better performance is achieved.

Reduction of errors: Prediction errors of machine learning models can be described through bias and variance. Bias refers to the difference between prediction and the actual outcome. Variance can be described as the responsiveness of a model to tiny fluctuations in the training set. It’s preferable to have a model with low bias and variance, but practically it’s a challenge to achieve.

Ensemble methods offer a way to lower prediction variance. For instance, through averaging of the performance of various models, the spread of performance is contained. The bagging technique assists in reducing the variance.

Boosting and stacking produce less biased models. We shall dive into these techniques in the next section. Plus, here’s a read on the relationship between ensemble learning and bias and variance.

The next section is split into two sections: basic and advanced ensemble learning techniques. We will cover three of each.

The name bagging is derived from the words bootstrapping and aggregation. It combines the two to form one model. Bagging is a technique that works with the idea of uniting many models to produce a generalized result. However, a challenge is realized when training the models. When you train all the models on the same data then combine them, they are most likely to give very similar results.

To solve such a challenge, a sampling technique we may use is bootstrapping. It may be used to generate subsets of observations from the original dataset. The sampling is done with replacement. Sampling with replacement refers to when an example is randomly selected from a population then returned to the population. The subsets are of the same size as the original dataset. These subsets may be referred to as bags.

Here are the steps to the bagging process:

The image below will aid in the understanding of the bagging process. Boosting involves the use of a collection of algorithms to convert weak learners into strong learners. A weak learner is one that labels examples marginally better than random guessing. An example is a basic decision tree. Weighted data is used on these weak learners. The weighting is specific for misclassified data. We shall revisit this in the next paragraph.

Boosting is sequentially done with every ensuing model aiming to minimize the error of the model before it. Let’s go through the process of boosting:

Let’s use an image to explain this technique a bit more intuitively. 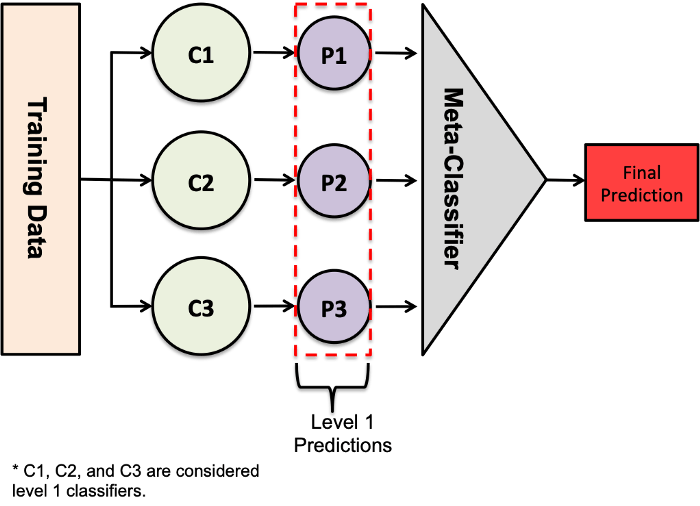 The framework of a stacking classifier

The image below gives a better description of the process. 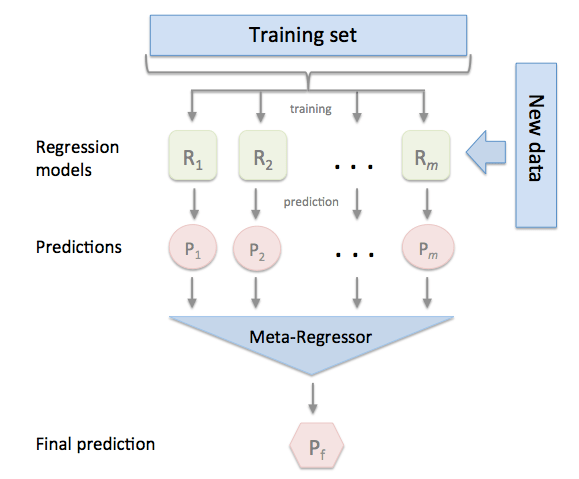 Here is a technical article on stacking and its implementation.

This technique is similar to averaging (which shall be discussed later) but is ideal for classification problems. Its explanation is simple.

Several models make predictions, that are referred to as votes; each prediction counts as a vote. As is often the case with voting, a decision is often in favor of most votes. The same applies here. The prediction made by the majority of classifiers becomes the final prediction.

This technique can be used for both classification and regression problems. Consider the same scenario as in the previous section, where we want to predict car prices. Our models end up predicting $ 6000, 7000, 5000, 6000.

Since we’re averaging, the final prediction is:

This technique is a variation of the averaging method. The difference is that, where averaging gives the models equal importance, weighted average gives greater importance to a model with greater predictive power. This importance is represented in terms of weights.

These weights may be represented as decimals whose total should be equal to 1. Here’s an example to make it clearer. Using the same example as the two previous sections, suppose we have four models to predict car prices. Their predictions are $ 5000, 8000, 7000 and 5000.

The final prediction will be given by:

Ensemble methods allow us to average the performance of many models to generate one final model. This final model offers the best performance compared to individual models in the ensemble. We have discussed a few advanced ensemble techniques as well as a few simple ones. I hope it has been insightful.

Until next time, good luck!